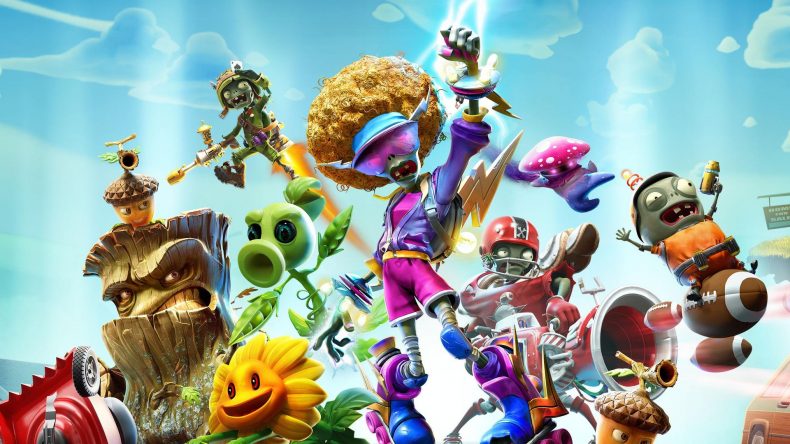 I’m going to lay my stall out right from the start here and say that I loved Garden Warfare 2, and felt that it was criminally underrated by the game-buying public. That said, as a competitive online shooter it was a little hampered by some continual balancing issues, thanks in part to the dizzying amount of character variants that were available – something that could well have put people off. Plants vs Zombies: Battle for Neighborville on the face of it seems to have streamlined a lot of those elements by removing the character variants entirely and opting for a simple system whereby each character can be assigned perks, with more characters specific ones unlocking the more you use them.

The developers, PopCap have opted for an interesting release for Battle for Neighborville with the game being released in “Early Access” mode about six weeks ago. Players could procure the game at a reduced price and gradually over the weeks content has been released. I haven’t had the opportunity to be part of that Early Access for too long so I started a little way behind. Right now nearly all the elements are available to access with the exception of the Emporium which has a variety of “coming soon” messages. Regardless of that, if you were to jump into the game today you may find yourself overwhelmed with what is actually available for you to do.

Garden Warfare 2 was a generous package shipping with a large number of maps, the Ops mode as well as loose campaigns for both the Plants and the Zombies. Battle for Neighborville appears to be something even bigger with a substantial focus on PvE play as well as the horde type modes of Garden and Graveyard Ops and more familiar multiplayer play lists. The hub area is called Giddy Park and is pretty huge in size with a dedicated area for the Plants and another one for the Zombies, separated by an amusement park area in the middle. There’s also a campaign-style PvE area for the Zombies called “Weirding Woods”, as well the Plants counterpart – Mount Steep and a combined Plants and Zombies area called Town Center. In each of these three areas there are loose campaign missions to follow for both teams as well as a variety of other PvE action from Bounty Hunts taking on mini-bosses, as well as collectible gathering and various challenges. Each area also has a number of unique character cosmetics and items to be unlocked for performing various challenges with the areas. The PvE can be tackled alone or with friends, and I have been having a great time pottering about in them all trying out a variety of the different characters. In terms of the characters they are all fun to use in their own way, with each one having a very specific design and character element to them. They are all imbued with great humour and have an interesting mixture of skills and abilities that have been fun to experiment with. Much of the campaign missions in the PvE areas are surprisingly challenging at times, and after playing with a friend for a few of them I’ve reached the conclusion that these areas really encourage an element of experimentation with each of the different characters, be that for reaching hard to access area or for finding the best combination of character abilities to handle a specific boss.

In terms of the roster of characters there is a huge twenty to choose from. Previous players will recognise a lot of them, but there are a few new ones that have been added including a ninja mushroom for the Plants called Night Cap and the roller-skating Electric Slide for the Zombies who comes complete with a set of vocoder voice-lines that make me laugh every time I hear them. There’s also the fire-breathing Snapdragon and the tiny Acorn that can become a giant log-rolling oak for the Plants, plus a bow-wielding 80s Action Hero and the Space Cadet who can transform into a Space Station for the Zombie team! Each one is fun to use in their own way, at least in PvE, but during my time with the online multiplayer playlists it is evident that some characters have advantages over others with only a select few being chosen by players.

Balance seems to be an ongoing issue for Plants vs Zombies. The multiplayer is a lot of fun for the most part, but there is no denying that some characters and their models are a hindrance to play. The Acorn, which transforms into a huge oak is a slow, lumbering character that packs a punch, it also takes up a sizeable place on your screen, both as a player and crucially when someone else is playing as it. In some of the more frantic matches, lots of players gather together at the same point and friendly team members can often obscure your view, the oak being a particular issue. In a game with more standard models this isn’t such an issue, but the wide variety in sizes and shapes of the zombies and plants do make a significant difference. Due to the differences in each character it is hard to pinpoint a particular Zombie character that is a direct counter to a plant, and vice versa. Each side has similar characteristics, but none are exact replicas. The Scientist is a healer, for example, and the Sunflower performs the same function for the plants, but the way they heal is different. I think these subtle differences, a lack of a clear counter on each side to a particular enemy, and the way the maps have been built make it far too easy at times for one team to completely power roll the other. I have been in far too many matches where I have been on the winning or losing teams where the differences are significant. It’s not uncommon for example to finish a game of Team Vanquish or Team Deathmatch with one team with 50 points and the other with a bare 10. On the winning team it is fun, but uncomfortable, on the losing side it is just miserable. It is still early days in the game’s life-cycle, but I hope that some work is done to try and address this issue soon as I fear the unbalanced nature of most game types will put players new and old off.

There is no doubt that, for the most part, Plants vs Zombies: Battle for Neighborville is fun. There is a tonne of PvE content to keep players busy, with any activity there contributing XP and coins for cosmetics. I do feel that the character balancing still needs some work. PopCap has removed the variants that were a continual balancing headache for Garden Warfare, but haven’t addressed some of the more fundamental issues, and as such it is far too common for matches to feel totally one-sided. Multiplayer issues aside, Neigborville is a fun time with a colourful cast of characters that ooze charisma. There’s plenty of PvE content as well as co-operative missions to keep people engaged, and it is all packaged in such a lively, humorous way it’s hard not to like it.

Battle for Neighborville is fun and bursting with humour. It’s packed with content that you can play co-operatively in PvE and competitively in multiplayer, but some balancing issues at present can make the competitive side feel a bit of a slog.

You may also like
EAPlants Vs Zombies: Battle for NeighborvillePC