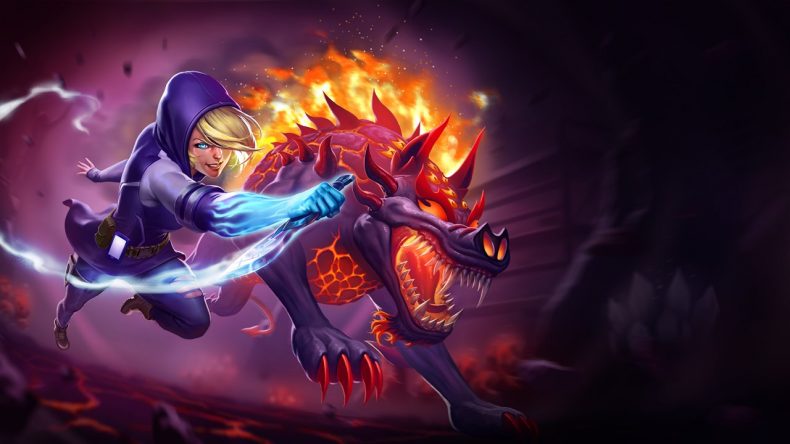 Obey Me is very much a game with two sides. On the one side it’s a pretty competent top-down brawler, complete with combos, changeable weapons, special moves and a variety of demonic enemies to terrorise. On the other side it’s a poorly written story about a demon hunter and her talking hellhound trying to stop demons doing demon stuff.

Vanessa Held, the protagonist of Obey Me, is an angsty teenager with a penchant for knives and sarcasm. There’s a definite sense that the writers wanted to invoke Buffy, or maybe even Devil May Cry‘s Nero, but they push the sarcasm so far that she just ends up becoming irritating.

As for Monty, Vanessa’s hellhound companion, well he might be amusing with a better voice actor. As it stands he’s got a weird Scooby-Doo pitch that grated on me from minute one. Everything he says is intensely aggravating, and as a result the two together say nothing worth listening to in voices that do nothing but drag nails down a chalkboard. Thankfully, there’s a pretty decent action game buried under the ill-conceived theatrics. Forget the throwaway plot about a demon lord using his company as a front for an invasion of Earth, and focus instead on the combat and you’ll have a much better time. While not perfect, Obey Me’s moment-to-moment action is enjoyable enough.

Vanessa begins with a few basic combos and the ability to perform a teleport dash or throw her glowing knives. As you progress, more weapons and combos become available, but you’ll also unlock moves for Monty. In battle, he transforms into a fire-wreathed monster (among other things), able to spit fireballs and set enemies ablaze, while Vanessa herself can activate a demonic form to deal more damage for a short time.

The top-down perspective and fast pace make it feel almost like an action RPG at times, but the plot is fairly linear. The enemy variety isn’t bad, either, but you’ll end up approaching every area and stage in the same way, and that’s to mash buttons like crazy to mitigate damage, because there’s no way to really read your opponents. Attacks come from all angles, and there’s little nuance to the combat and little sophistication to the AI. Luckily, it remains fun despite this issue, because it keeps you moving and pushing the offensive. You can navigate each encounter quickly and fluidly, and Vanessa is a pretty robust specimen, able to weather a surprising amount of damage before taking a knee. Bosses are universally frustrating though. Once again, they don’t do a very good job of telegraphing attacks, and so you’ll likely resort to a hit-and-run style for all of them, doing as much damage as possible and getting the hell out of the way while Monty’s spells are on cooldown. What could well have been a very clever and balanced mechanic becomes instead another exercise in button-mashing, but at least it’s pretty button-mashing for the most part.

It’s all presented in a fairly attractive comic book art style, with vivid colours and smooth animation, and on the PC version there’s no slowdown or technical issues even when a second player joins in as Monty. In local coop it is somewhat clumsy, however, as the actual space on screen is often limited. I also experienced a few issues with controller support, having to make a few changes in settings to get my Xbox One pad to work properly with it. This wouldn’t be a problem if it wasn’t for the fact that Obey Me plays much, much better with a pad.

Vanessa and Monty make a great team in combat, but the constant banter between them is often more annoying than amusing. Still, if you’re able to ignore the hokey storyline and amateurish writing, Obey Me is a decent action game.

Combat is responsive and fast
Good range of weapons and abilites

If you're able to ignore the hokey storyline and amateurish writing, Obey Me is a decent action game.