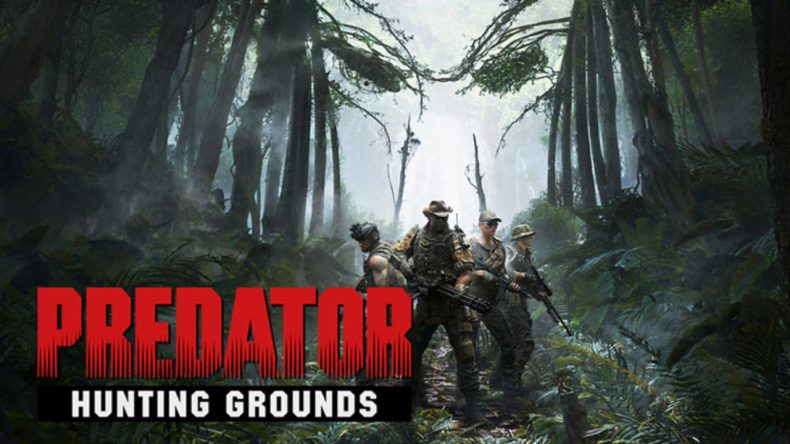 It’s not much of a stretch to say Predator is one of the best action movies of the 80s. It has plenty of violence, an alien that couldn’t look any cooler, and the cherry on top, Mr. Arnold Schwarzenegger. Unlike the franchise’s debut on the silver screen, subsequent films have been fair to middling or just downright awful, but there’s always the hope that someone, someday can reignite the thrill of the original. It’s muddied history in the video game medium has also lacked that one gem able to highlight the appeal of the trophy hunting creature, but alas, developers keep trying.

IllFonic – the team behind Friday the 13th: The Game – has attempted to bring an authentic and exciting Predator game to the masses, and whilst it has its fair share of problems, Predator: Hunting Grounds can be a gold mine of exhilaration and gore. Much like Friday the 13th, you’ll either play as the hunter or the hunted. The Fireteam is a paramilitary unit tasked with different missions within a claustrophobic jungle, such as extracting classified data or collecting water samples. Although these objectives aren’t particularly difficult, they provide a distraction to the impending doom of the Predator’s appropach, and act as a prerequisite to you getting to the chopper.

It plays like a traditional FPS, with many of the controls as fundamental as they come. Logically, the tutorial skips the need to show you how to play as a member of the Fireteam, instead getting you familiar with the Predator’s range of abilities and controls. Using camouflage hides you from the enemy, but they can still see the blurry heat-like haze when you move. Still, it’s a great tool when you’re high up in the trees or amongst the fauna, allowing unsuspecting victims to walk past you without being alerted to your presence. You can also see heat signatures that allow you to pick out your target in the dense jungle, and when doing so you can press right on the D-pad to sense other player’s movements. It’s a vital bit of tech that helps you to see bodies clearly, especially as you run across the treeline above. Whilst on the ground, you can press X to jump into a tree, and from there you can move like the wind from branch to branch, avoiding gunfire or stalking your prey with great speed. One of the drawbacks, however, is that if you’ve been shot, your green luminous blood will be left in your wake – another telltale sign for the Fireteam to track you down.

On top of these environmental bonuses, you have some suitable firepower in the field. Your Plasma-caster is a powerful weapon, capable of firing plasma charges from long range, perfect from high above. Not all attacks need to be attempted from a distance, and when in melee, your wrist blades are great for slashing at your prey. Some other weapons can be unlocked the more you play (such as the Smart Disc), and when equipped lead to severely damaging consequences. Failing all your hard work, you can initiate a self destruct sequence that could end up wiping out the entire Fireteam squad. Nice.

It’s not always clear where the Fireteam are, as you’re not hearing the same radio messages as them, but the sense of freedom you have when hunting them is welcome. When you’ve spent some time listening for gunfire and tracking their movements, it’s so satisfying watching them from high above, knowing that you could end their life in a heartbeat. The Predator is overpowered – as it should be – but that’s not to say it’s invincible. Being a member of Fireteam is just as satisfying as playing as the Predator. With it being an asymmetrical shooter, each member of your team has the freedom to do what they want; however, working together is the key in successfully meeting your objectives. Sticking together allows you to have more of a chance to defeat the Predator, but it also means you can complete the objectives faster. AI-controlled soldiers populate the map, and being separated from one another makes you more vulnerable to them, quickly becoming overwhelmed. As much of a great addition as they are, IllFonic needs to work on their intelligence and damage output.

You can run right up to them without them hearing a thing, allowing a swift and easy takedown. I also had times when they walked right past me in the open, letting me gleefully shoot them without any kind of resistance. You can also take a lot of bullets before you notice any significant damage, making the Predator the only real thing you need to worry about. Still, it gives you something to do whilst venturing into the abandoned train yards and warehouses, taking your focus away from the real threat of the game – the Predator.

Predator: Hunting Grounds is solely played online, so before you get into any game, you have to spend a good amount of time waiting to be the Predator. Even though there’s now been a patch to help address the issue, I still waited in excess of 15 minutes before a match even started post-improvement. If you’re not fussed about playing as one of the paramilitary soldiers, matches can take less than a few minutes to get going, but part of the allure of Predator: Hunting Grounds is being the infamous alien. There are some significant texture issues within the jungle, and the occasional frame rate drop occurs, which can hinder your match quite a bit. Predator: Hunting Grounds isn’t riddled with technical issues, but they are enough to make you notice how rough around the edges it is. In the game menus, opening Field Lockers (loot boxes) can take time, although since the patch has been implemented I’ve experienced fewer issues. Fundamentally, everything needs a bit more polish to navigate through the customisation menus and options because at present, there’s a fair amount of lag.

Speaking of customisation, there’s plenty here to keep you busy. You earn Veritanium Fragments by finding them in the jungle or by playing, and the more successful you are, the more you earn. These can be used to buy Field Lockers (you’ll also get one when you level up) which have a range of cosmetics and weapon modifications inside. Face paint, shaders for you weapons, outfits, and headgear are just some of the things you can equip your Predator and soldiers with. If you don’t want to wait to see if you get that fancy-looking gold shader or red camouflage colour for your outfit, everything has a set price, allowing you to spend Veritanium how you see fit.

The more you play, the more you level up your character, and by doing so you unlock new classes, weapons, and mods for both soldier and Predator. There’s enough here to keep everything ticking over nicely, and the rate at which I was upgrading my loadouts flowed at a relatively brisk pace. Predator: Hunting Grounds is a barebones online shooter. It’s not in the same league as Overwatch or Call of Duty, but what IllFonic has done is make the Predator franchise relevant again, despite its flaws.

Predator: Hunting Grounds is a thrilling asymmetrical online shooter, despite lacking the polish of bigger, more established games. It may not shine in its visuals or stability, but there’s a great game in here, and you can definitely have a lot of fun, whether you’re the Predator or not. As with Friday the 13th: The Game, IllFonic is likely to keep adding new stuff, and improve the technical issues. If this is the case, hopefully down the line we’ll get more maps, modes, and cosmetics to keep players hooked, but for now this is definitely something you can get stuck into.

Predator: Hunting Grounds is adecent asymmetrical online shooter, despite lacking the polish of bigger, more established games. Although there aren't a lot of modes, and load times to play as the Predator are too long, it's still a lot of fun.