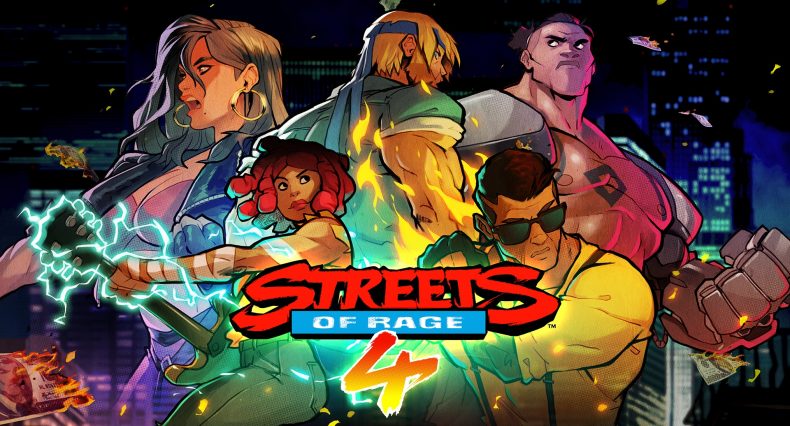 Sometimes it’s good to go into a game blind. Apart from Sonic the Hedgehog 2, the original Streets of Rage was my favourite Mega Drive game. I spent hours on it back in the days of using plastic cartridges to get my gaming thrills. Axel was my character of choice, but I still had a soft spot for Alex and Blaze. They were cool cats, clearing up the streets one kick at a time, and I’d missed those guys a lot. Playing the original now still holds up, but it lacks the polish and speed, so when Streets of Rage 4 was announced, I couldn’t have been happier.

Still, I stayed well away from the trailers and marketing as much as could, just so I could experience the new game without any preconceptions or expectations. From start to finish, Streets of Rage 4 is everything I hoped it would be and more. The combat has a satisfying repetition to it. Outside of the standard punches and kicks, you have certain specials for each of the four starting characters. Axel has a Ryu-like uppercut, whilst Blaze has an electricity field that burns anyone in range. The two new characters are a welcomed edition to the line-up. Floyd is a huge dude with bionic arms that uses them to grab enemies from long range, who can also grab two enemies at a time. Cherry Hunter, daughter of SoR legend Adam Hunter, uses her rock guitar to dish out punishment, making the most of her agility to gain the upper hand in battle. Back in the originals, you could use a special that called in a reinforcement cop car to fire projectiles into battle, but now each character has a unique move of their own. Using them effectively replenishes health, but if you get caught your health will deplete, so you need to be careful when deciding whether to bring out the big guns. The flow of combat is so good, too. Striking, grabbing, jumping, and utilising special moves make every fight feel different, and when you have a second player join the mix, there’s plenty of room for improvisation.

Environments are stunningly hand drawn, thanks to the talented bunch at Lizardcube. Every stage has hidden pitfalls to be used against enemies, but they can also be dangerous to you. In one section, you’re in an elevator, and if both slides of the glass get damaged enough, you can knock or throw enemies out of them, sending them to their deaths. However, if you get too close, you’ll lose a life as well, so it adds a hidden element of strategy in combat. Each stage is vastly different to the last. There’s police stations, an aeroplane, subway trains, and sewers, with great attention to detail everywhere you look, Familiar enemies return, such as the fatso who blows fire, that sneaky bastard who charges you with a knife, and the dominatrix with a whip. Boss fights are varied, and have a fantastic rhythm to them. Everything about the game oozes cool, and with a cracking soundtrack to boot, there’s literally no reason to avoid playing it. Yūzō Koshiro and Motohiro Kawashima who created the original score are back for Streets of Rage 4, and the electronic synth waves are back to provide a sometimes thumping, sometimes chilled groove. It’s authentic, awesome, and everything you could possibly want from a soundtrack.

There’re so many throwbacks to the original trilogy, such as the weapons you can use. Miss those broken glass bottles and steel pipes? Well, they’re back, among a lot of other unique weapons, such as the mace. Chickens and apples will recover your health, but there’re options in the menu that allow you to change them up to different foods, providing a nice touch to what you choose to chow down on. You can also use the menu to change how the game looks. Miss the retro aesthetic but love the speed and fluidity? There’s a retro and retro CRT option that makes it look just like the originals. Lizardcube, Guard Crush Games, and DotEmu have thought about everything, making Streets of Rage 4 appeal to older fans, whilst inviting newcomers to the series as well.

The story is over the top and a tad ridiculous, but it doesn’t matter. There’re a lot of surprises, such as returning characters and locations, and you can also unlock new stuff to replay the game with. It’s not a long game, but the variety in levels and satisfaction whilst playing give you more than enough reasons to replay the whole thing. Wonder Boy: The Dragon’s Trap was a stellar remake, but Lizardcube has outdone itself with Streets of Rage 4. My only real issue is how abruptly it ends. After the final section, the credits roll without any real segue or exposition.

Along with teaming up with friends online or locally, Battle Mode allows up to four players locally or two online to face each other. Picking from the roster of characters, you can battle it out to finally answer the age-old question of who is better, Adam or Axel? Seriously, though, it’s a decent escape from the waves of AI-controlled enemies, and thanks to the wonderful combat, this mode adds something extra to the already excellent single player campaign.

Streets of Rage 4 is wonderful. Everything from the combat to the soundtrack is crafted with a great respect to the originals, providing a fresh take on the popular series. With plenty to unlock, including characters and tracks from the original trilogy, there’s lots of replayability value, and with the added Battle Mode, you’ll never be without anything to do. It’s the perfect length, never outstaying its welcome, but quite honestly, I could play this forever and never get bored.

Streets of Rage 4 is wonderful. Everything from the combat to the soundtrack is crafted with a great respect for the originals, providing a fresh take on the popular series.