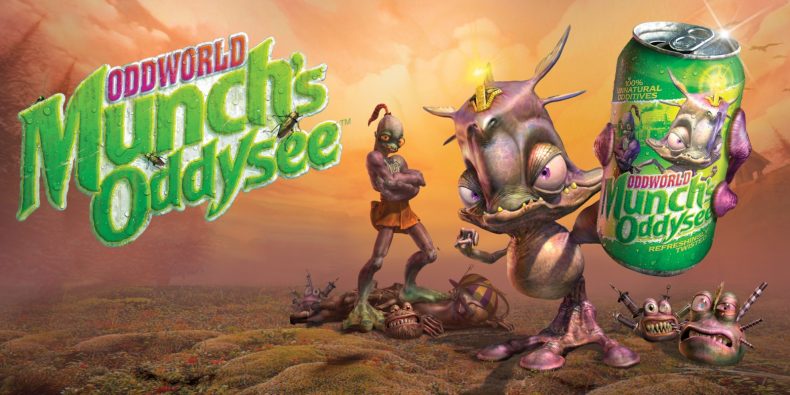 In the days of yore, when PlayStation ruled the land, one unlikely hero became a poster boy for the lesser-known mascots. Abe was that unlikely hero. He never wanted to bare the fate of his world upon his shoulders, but alas, after seeing that the despicable bigwigs at RuptureFarms were slaughtering Mudokons, he took matters into his own hands. Oddworld was indeed odd, stripping the platformer genre of cutesy characters and colourful worlds in favour of murkiness and the macabre. They were intricate games back then, and even the third entry in the series, Oddworld: Munch’s Oddysee, continued to reinvent the series. However, that was in 2001, and a lot has happened since then.

What I don’t understand is why this has been re-released yet again. Since it came out almost 20 years ago, it has been playable on PC, PlayStation 3, PS Vita, and mobile phones. Now, instead of developing something new, it has found yet another home on Nintendo Switch. Oddworld: Munch’s Oddysee has always been a good game, but there was a time and a place for it. The controls are unresponsive and finicky, controlling the camera is a palaver, the environments are bland, and enemies are a royal pain in the arse. Were these all problems existent when it originally released? Probably, but they’re only noticeable now because we’ve been so spoilt since.

Abe is still very much part of Munch’s Oddysee, but a new character, the titular Munch, is who you spend much of your time with. Munch is a Gabbit, and the Glukkons have driven them to the verge of extinction by turning them into a delicacy known as Gabbier, as well as using them as lungs to replace their own from too much smoking. In order to save his race and stop the evil Glukkons, Munch teams up with Abe to stop them, along with a new race of deranged scientists known as Vykkers. In terms of originality, Oddworld Inhabitants know how to come up with something different, and although there’re certain platforming elements that pop up in other more popular titles, they’ve got a nice mix of mechanics that keeps things varied. Both Abe and Munch can control the prisoners they rescue. Mudokons can be told to wait, help out, fight, or follow Abe, and the new ‘Fuzzles’ can be ordered by Munch to attack Vykkers and other enemies, along with the same kind of controls as Abe. It isn’t long before you get to play as both Abe and Munch, and each character has certain abilities that the other doesn’t.

Abe can use mind control on enemies and pick up his friends, but he can’t swim. He can also buff himself with fizzy drinks that give him temporary abilities like running faster and jumping higher. Due to the experiments conducted on Munch, he can drink beverages from vending machines that allow him to zap enemies and temporarily stun them. Not only that, but he can swim, and has a sonar that allows him to find any Fuzzles that haven’t been located. Using each character to complete puzzles and make your way through levels is great in theory, but the problems with camera angles and awkward controls can stop you enjoying it to the fullest.

For example, jumping over an obstacle won’t happen if you’re flat against a wall. This might not sound like much of an issue, but when you’re being chased by enemies or getting attacked, it becomes impossible unless you have a run up. Again, it may not sound too tricky, but when you’re surrounded, movement is severely restricted, making it become an unnecessary evil. Some of the more restricted levels sees the camera spin around, meaning you constantly having to spin it round to get the best view possible, but it becomes a real pain when you’re in the middle of a fight or trying to locate your rescued Fuzzles. Collecting spooceshrubs help you unlock certain doors and allow Abe to control an enemy’s mind. They’re plentiful and spread out across levels, but again, if you’re being harangued by pests and trying to evade them, jumping away and gaining control of the situation can be tough. You’ll eventually get used to it, but getting a precise jump is a rarity, providing a frantic pace which shouldn’t even be there in the first place. Using the B button helps you to interact with your surroundings, but the amount of times I jumped off a platform instead of freeing a Fuzzle or pulling a switch happened far too often, again adding to the control responsiveness.

Oddworld: Munch’s Oddysee looks far too bland. Environments are lifeless and wholly colourless, and textures are lightly detailed. Not only that, but the cutscenes have that ‘vaseline smear’ on the camera, signalling that they’ve not been touch since its initial release. You have to wonder why it was released on Switch. It’s an old game that was good at the turn of the century, but with no noticeable changes, it feels redundant now. There’re no performance issues, although in handheld the colours seem to be less noticeable, making certain areas tricky to see clearly.

If Oddworld: Munch’s Oddysee was one of your favourite games on the original Xbox, you may enjoy the nostalgia. However, for anyone wanting to try it out for the first time, you will likely be let down by the awkward controls, frustrating camera angles, and irritating jump controls. With no obvious differences from the original, it begs the question, what was the point?

A nice mix of mechanics
Unique story and setting

Although it was good in 2001, Oddworld: Munch's Oddysee is let down on Nintendo Switch by awkward camera angles, frustrating controls, and bland environments.