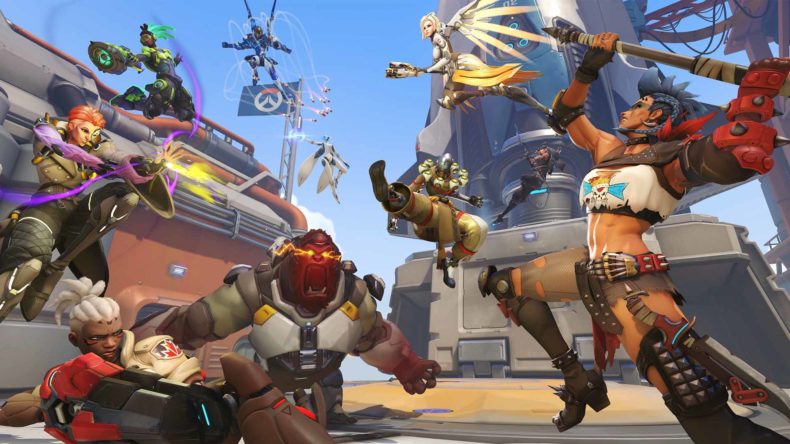 The thing about Overwatch 2 is that, whatever I say about it right now is going to please some people, and make everyone else potentially very angry. Being free-to-play, the question really is about what you want out of a quasi-sequel to one of the best shooters of the modern era. What Overwatch 2 gives me, however, is exactly what I wanted.

I say “quasi-sequel” because everything about how the launch of Overwatch 2 has been handled has been peculiar. From misunderstandings about the battle pass to how ranked matches are going to work; how to upgrade from the original game to the sequel, and pretty much everything in-between. So let’s be clear about this: this new game is a replacement for the original. That 2016 game is gone and dead: there’s no way to play it, this is the new hotness, like it or lump it.

That said, the excitement and enjoyment I have had with Overwatch 2 is exactly how I remembered the first game when it launched. The newness, the want to experiment, and to stay up late playing with teams. Yes, it’s teams of five now, but honestly, along with the new maps, heroes, and old hero tweaks feels exactly like what the game needed to become fresh again. Even the new “push” mode feels exciting and just a bit different, requiring you to fight for control of a robot and attempt to get the most distance “pushed” in order to win a round. 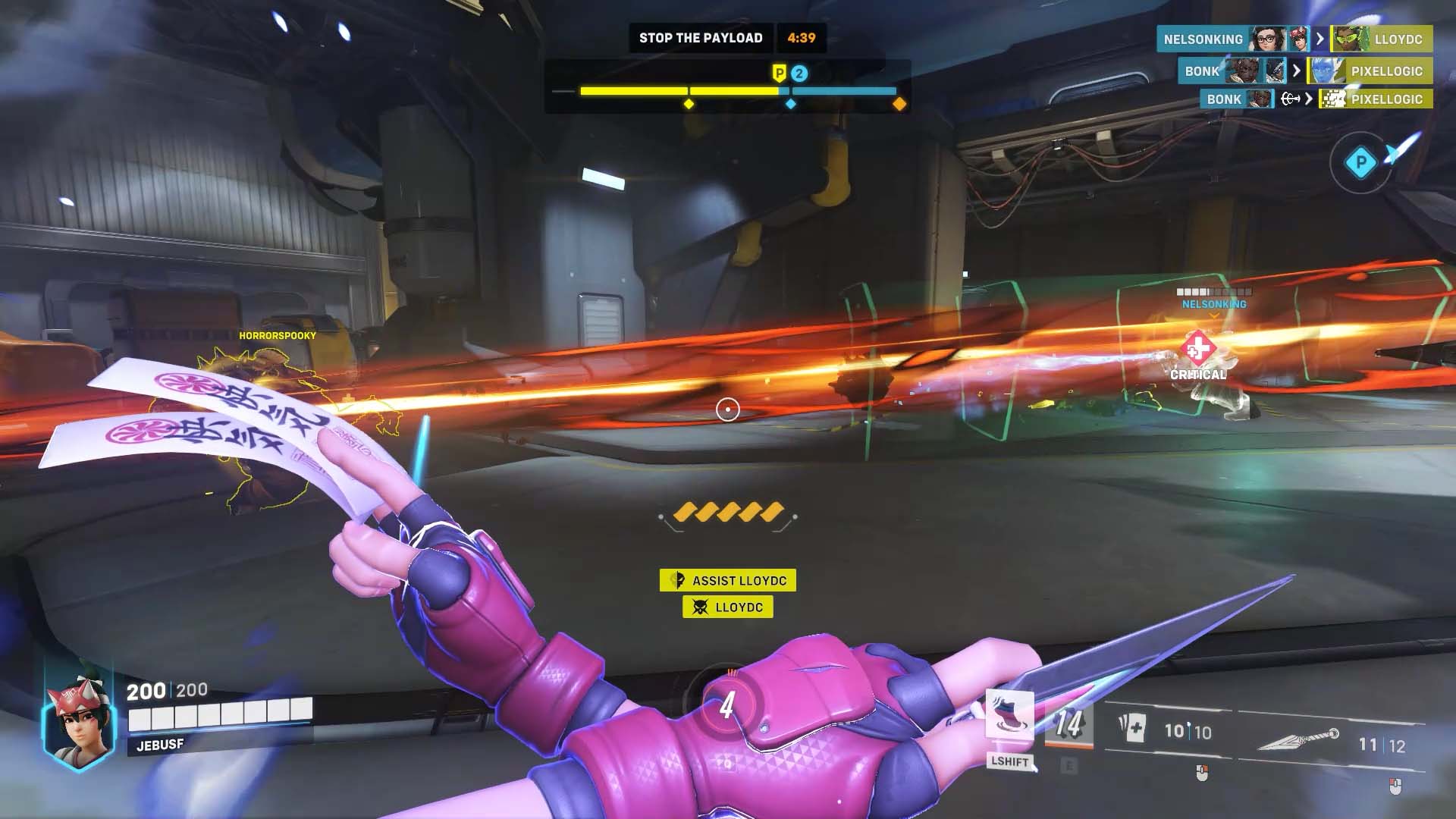 But let’s start with Kiriko, who is a fascinating new character. She feels like the definition of a high skill ceiling character, with high damage output possible, great healing, but all timed in a way to require a certain level of mastery to make her viable. She could end up being tweaked further, who knows, but right now, she gives me the feeling Mercy did way back when.

While some heroes like Baptiste still feel like they need some tweaking (he’s a beast, no question), others feel refreshed again. Bastion’s now mobile tank ability means he might get played again, and god forbid you may even end up with the original combo of a Bastion and Mercy rushing fools, one boosting the other.

Roadhog is a menace, with his huge 700hp stat, and requires some teamwork to take down quickly before he renders too much damage done. Sombra feels buffed and as though she’s a major offensive option now, combining stealth and hacking with large damage for satisfying outcomes, and able to hack during stealth without removing the stealth. 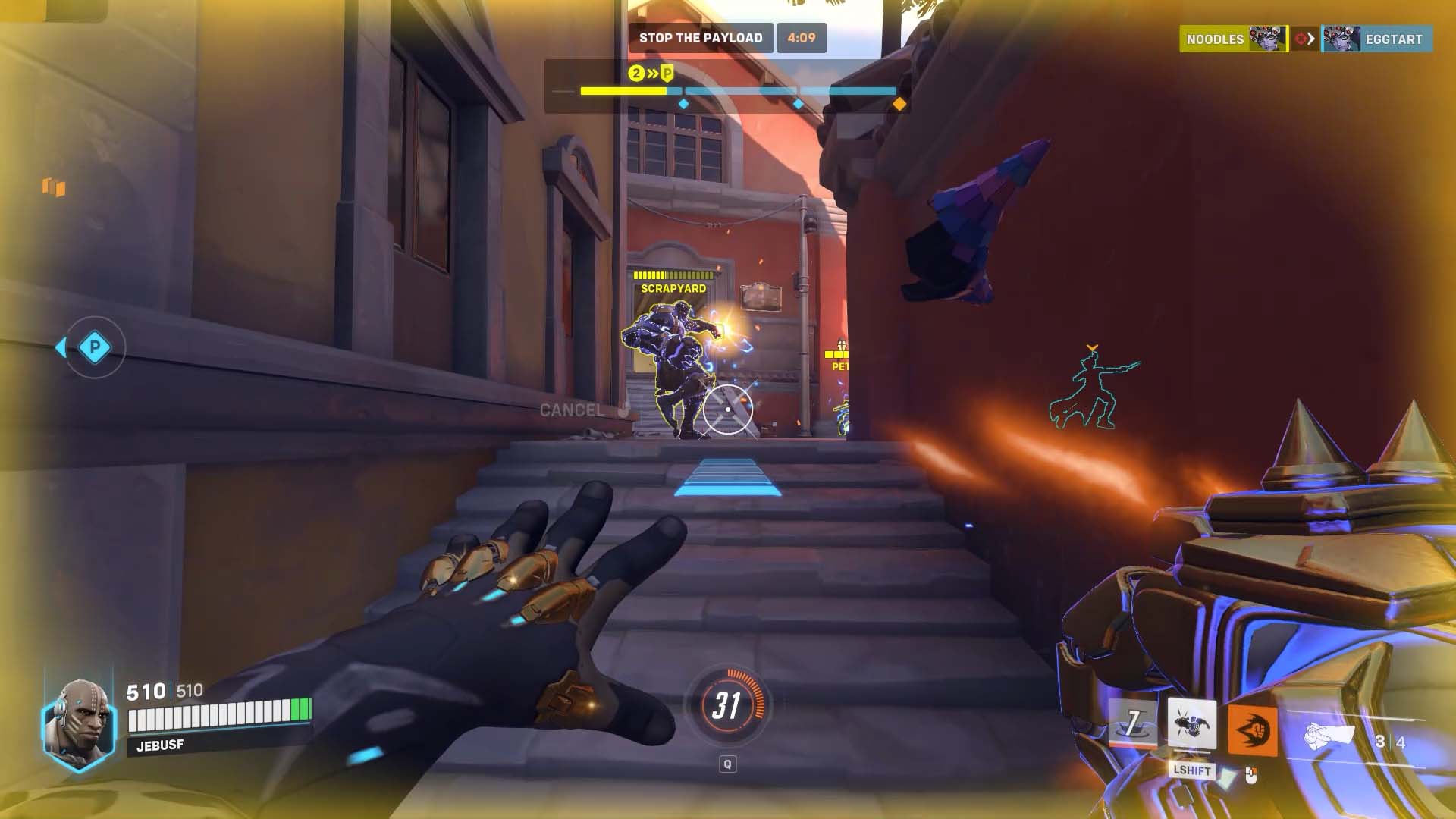 Cassidy has had his flashbang removed; Doomfist is now a tank with almost double the health pool, move changes made, and more; Junker Queen has had her shout radius dropped; while heroes like Hanzo, Lucio, Tracer, and many others have barely been changed at all. As one of the best Overwatch players I know said, however, “If you change Tracer, she’s really not Tracer anymore”.

Mei has received a massive change, with her freeze ability now a constant slow instead but a larger damage output. She’s still viable, but she’s different. And that’s the rub, really: so much has changed, but so much has stayed the same. I picked up Reinhardt and it was like I’d never stopped playing as him, yet there are tweaks under the hood that, at a glance, you wouldn’t even notice.

Listing all of the changes is folly, but the point is this might feel similar at times, but it’s not the same; not really. The 5v5 dynamic changes matches dramatically, as does the switch to only allowing one tank per team of five. The new maps are great, the reworked maps terrific, too. There’s a plethora of voice lines which almost feel designed to remind you this is something new. When Soldier 76 says “I’ve got you in my sights” but it sounds different, it’s like a sense of something being off: it takes some getting used to, for sure. 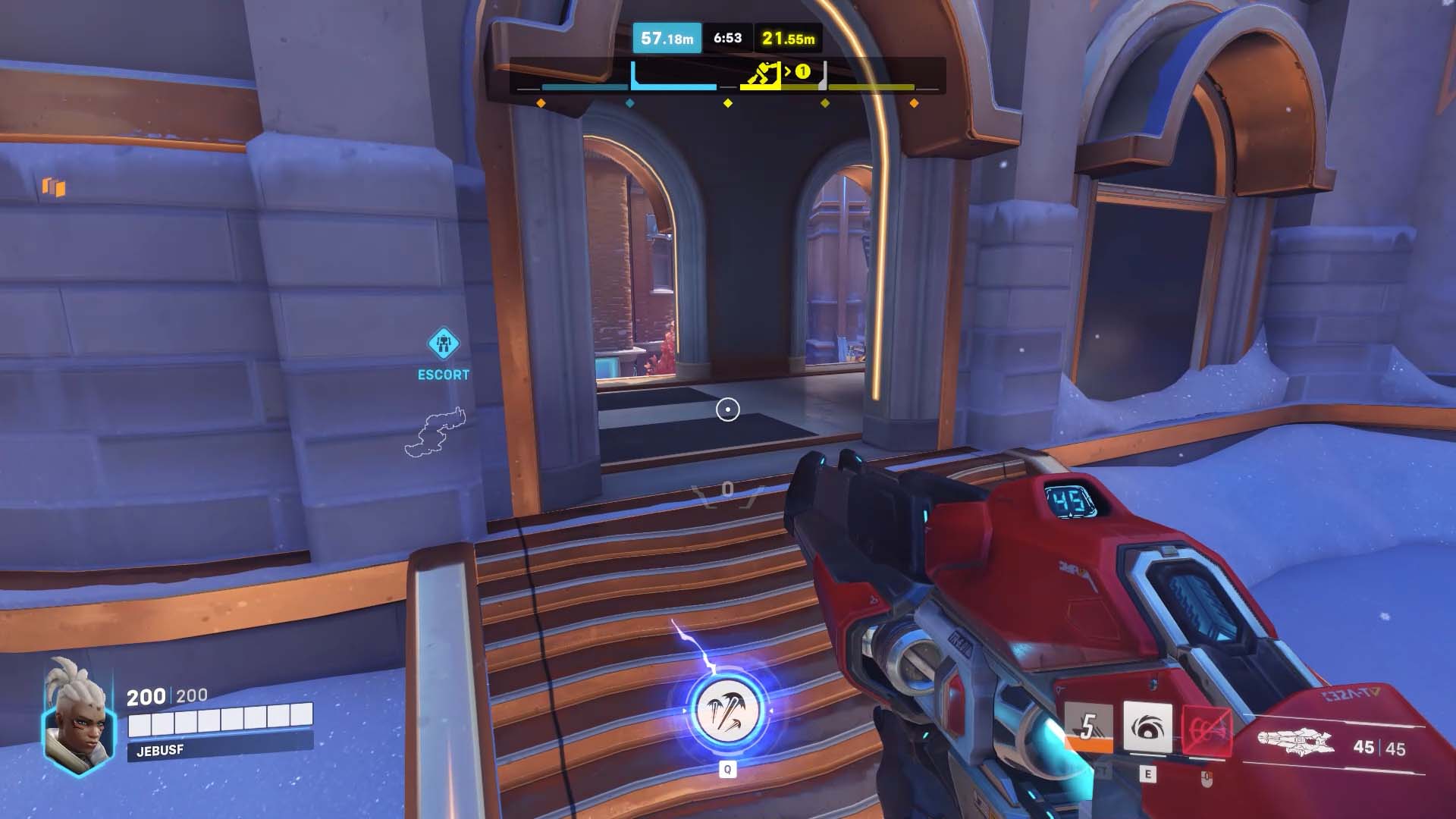 So what’s not to love, then? Well the battle pass is going to annoy some, there’s no question about it. Should you decide to pay for the premium tier, you’ll get Kiriko right away. That’s great, and means you are up on the meta, with access to every hero. On the other hand if you don’t want to drop any cash on Overwatch 2 at all, you’ll need to get some 50-levels in to unlock her, and let me tell you, even winning matches with the premium XP boost on, that’s no joke.

And I’m torn on this, in truth. Part of me doesn’t begrudge the developer trying to monetise in this way given how many hours I played the original, but part of me thinks this could have been a non free-to-play game and it could have pre-empted any arguments about the battle pass. Perhaps the blow will feel softened when the PvE content launches sometime in 2023, but that’s a guessing game right now.

I will say that the battle pass felt more worthwhile than the old system of levelling up, getting a loot box, and hoping. You can see what you’re grinding toward here, whether it’s a skin, voice line, emote, or whatever. Add in to that the fact there are multiple challenges to complete every day, and you’re always playing towards something progression wise. 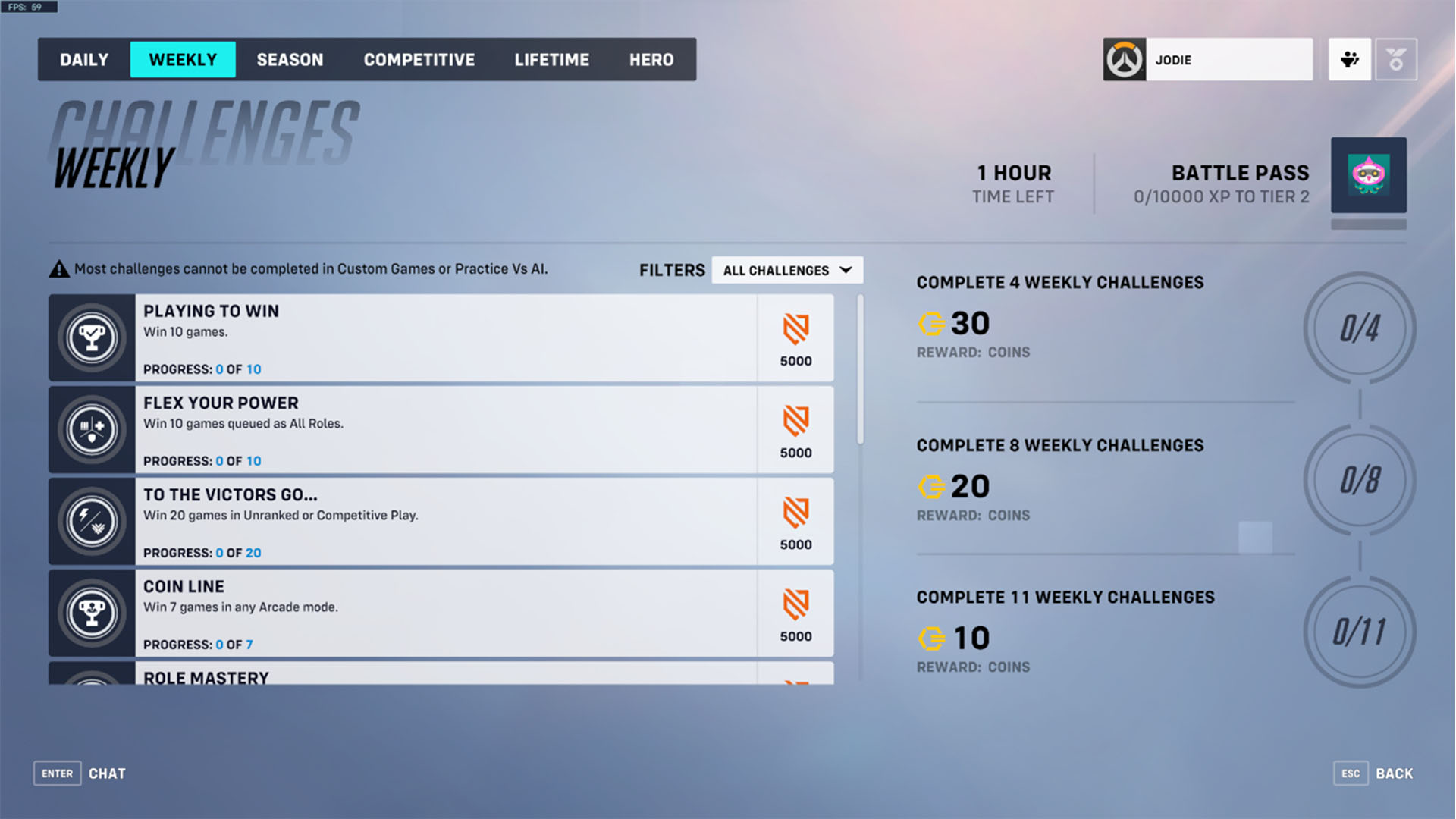 What I do object to is in-game store exclusives that are only purchasable with real money. During the review process there was a stunning Doomfist skin on offer, but the only way to get it was to shell out £4.99. Despite having Overwatch coins to spend on items, these were store exclusives. Maybe they’ll show up again in the battle pass, or to be paid for with coins, not money, and again, maybe you won’t mind dropping a few quid here and there as a thank you for the hours you get out of it. But regardless, it irked me having a balance I couldn’t spend on a thing I wanted, with the only way to get it, to drop more money into Blizzard’s pocket.

Competitive play appears to take cues from Blizzard of old, and reminds me of how StarCraft handled things. Rather than a singular rank, there are sub-tiers within them, almost like leagues, with bronze being lowest, and going all the way up to Grandmaster. There are still arcade games, optional deathmatch modes, and all the extras you’d expect. As a whole, Overwatch 2 feels premium, even if it’s free-to-play.

All of this leads me back to the original point: what do you want from a sequel? The elation and addictive nature of those early days are back, for me. Every round felt exciting, with new heroes to master, and my old favourites tweaked, like an old friend coming back with a new haircut you can’t quite get used to, but eventually will, and will wonder why you ever got annoyed about it in the first place. The truth is, Overwatch 2 plays brilliantly. It’s a wonderful shooter full of depth, with unique heroes to master, maps to learn, and hours of your life to lose all over again. Some people just hate change, admittedly, but to those people I ask, had you ever wondered what the first person to add cheese to a burger felt like? Go in with an open mind, preconceptions be damned, Overwatch 2 is one hell of a game.

Overwatch 2 plays brilliantly. It’s a wonderful shooter full of depth, with unique heroes to master, maps to learn, and hours of your life to lose all over again.