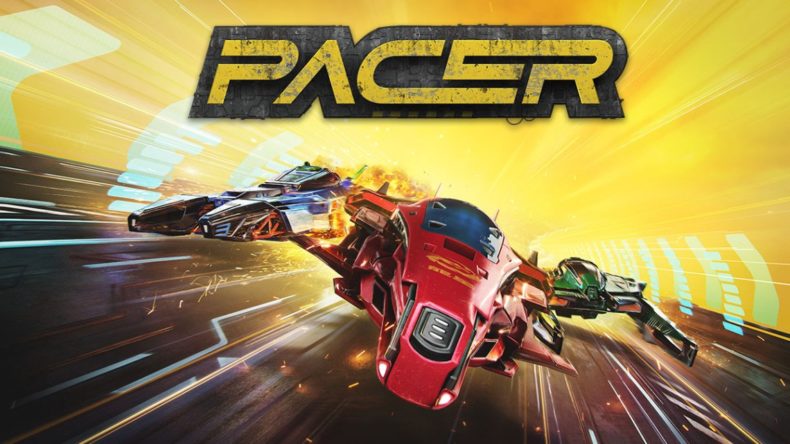 The original Wipeout came out in 1995 and it feels like it was only yesterday. High-octane racing in neon futuristic settings with a pumping electronic soundtrack made it one of the best racers of all time, so it’s no surprise that the people over at R8 Games wanted to recreate what made it so fantastic. Pacer is its own game, but those influences are worn on the developers’ sleeves. After all, some of the folks at R8 worked on the series. With that experience, it’s no surprise that Pacer feels very similar.

25 years later, and the spirit of Wipeout lives on. The racing in Pacer feels incredible, even when you are travelling at speeds in excess of 900 mph. Handling your craft takes a bit of practice, though. The majority of courses feature some tight corners and huge dips that need to be memorised to get the most out of them. You can drift round bends, and there are various speed boosts to ride through that grant you a quick burst of acceleration. Making use of these at particular points whilst trying not to crash is a skill that comes with practice, and it takes time to start finishing in first place. 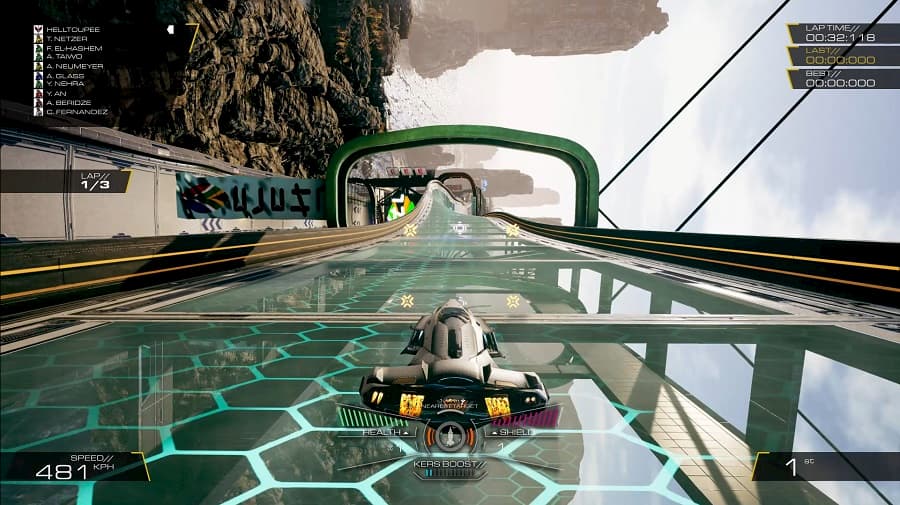 Everything from the type of team you want to join to which weapons and performance-enhancing parts you equip all work in tandem with one another. During the Career, it is vital that you pay close attention to which loadouts you use for different race types and courses. Races and competitions start out relatively easy, but there is a steep learning curve that not everyone will get on board with. Some teams require you to finish first in every race whilst others want you to refrain from using your weapons, so finding a match to complete objectives isn’t an easy choice.

Pair that with the wealth of customisation and Pacer is a robust racer that offers plenty of options. In relation to your performance, you can spend credits to improve your craft’s handling, defence, and acceleration. Whilst the in-game currency is earned quite easily (even in Quick Play races, which we will get to shortly), knowing whether to improve performance or weaponry can be a difficult choice. There are plenty of weapons to equip, and you can have two at a time. You can fire focused lasers or attach a rain gun to your craft, tether to nearby crafts to consume their shields to refill your own, and more. 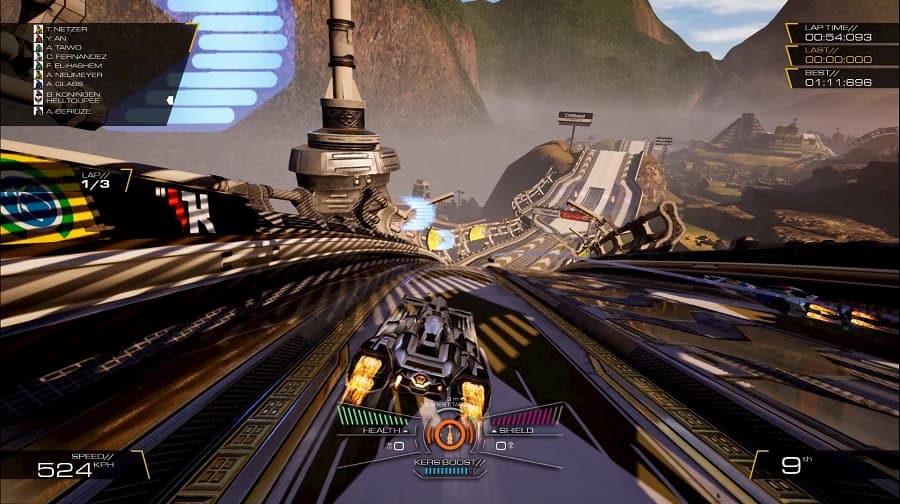 When you are using these weapons in a race, they don’t always feel as impactful as you would like. The railgun is great, but it requires accuracy, and you’ll often find that AI crafts do a better job of hitting you. The explosives can do a lot of damage, but they can be avoided if crafts manage to miss them on the track. Overall, the weapon system is OK, but Pacer’s racing is where the real skill comes in. The range of tracks on offer are varied, featuring futuristic cities, wintery industrial Russia, and dirt tracks set in the heartlands of America. Visually, the game stands out as one of the best, with defined courses and detailed environments.

The different modes you’ll encounter are mostly enjoyable. Flowmentum sees your craft get faster after every lap, whilst Storm creates a dome around the track that must be stayed in or else your craft will become too damaged. Other modes are based around destroying fellow crafts, eliminating last place after every lap, and the good old fashioned ‘finish first,’ but Flowmentum and Storm are the two standouts. You can take part in Quick Play, which allows you to play on any course (providing you’ve paid credits to unlock it) with any craft and loadout, as well as other options such as racing at night or playing the course mirrored. 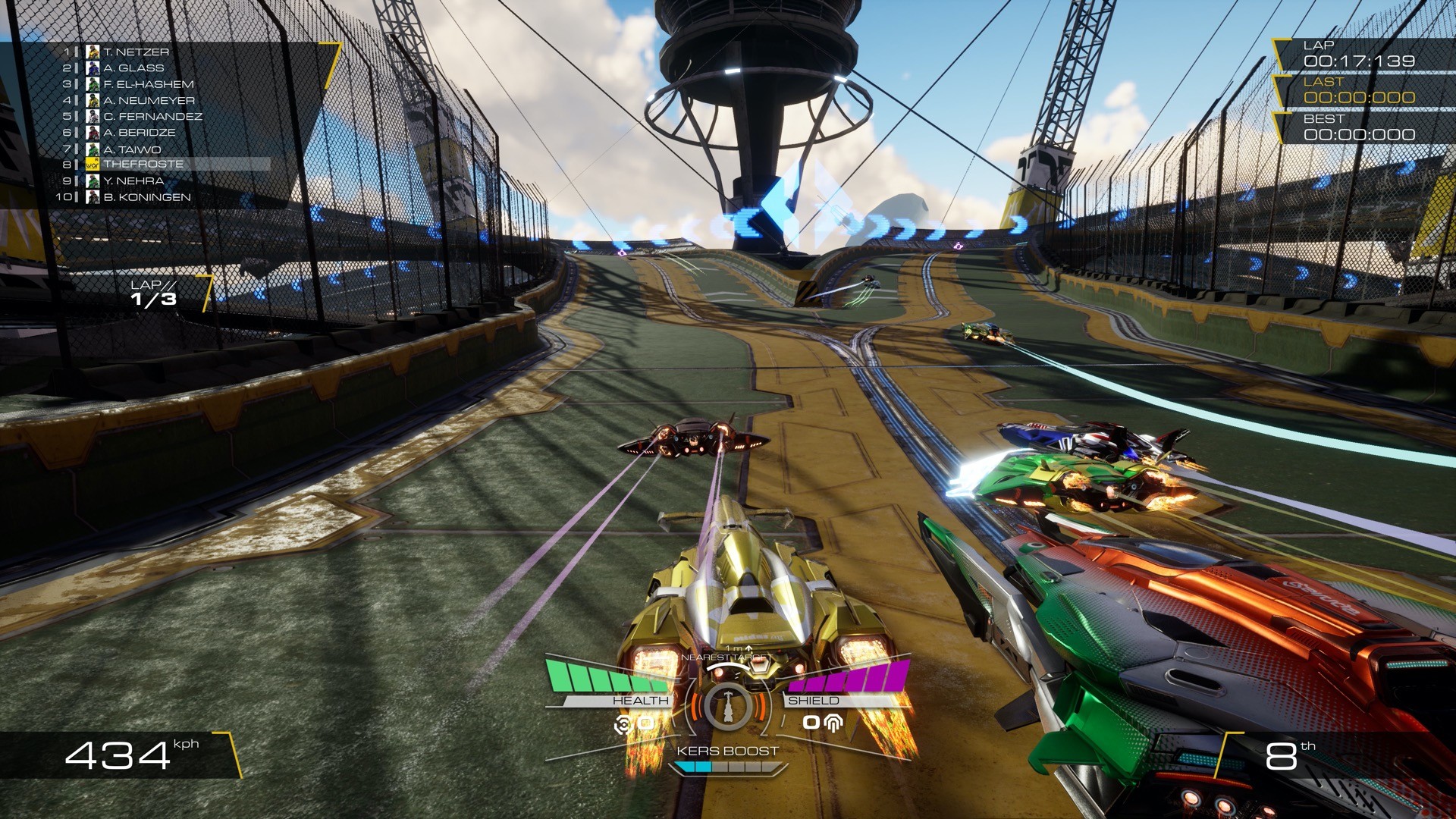 Speed is the main draw here, and there are different speed classes to choose from: F1000, F2000, F3000, and Elite. It takes hours of practice to even finish a race in Elite, but that’s the draw of Pacer. Racing is so much fun, and the dedication to improving your skills as a racer is what will soak up your time. You can also race up to nine other people from around the world and compete for bragging rights on the leaderboards, however, I would suggest getting that much needed practice in first.

Pacer is an excellent racer brimming with energy and replayability. The courses are varied, and the range of weapons and performance upgrades are well worth experimenting with. It’s impossible not to talk about Pacer without mentioning the incredible soundtrack. You can customise playlists featuring tons of tracks, including a brand new score by CoLD SToRAGE AKA Tim Wright. These bangers help to keep the blood flowing and the excitement of every race alive. There’s a lot of fun to be had with Pacer, and if you loved Wipeout, this is a must-buy.

Weapons aren't as good as they could be
Steep learning curve

Pacer is an adrenaline-fuelled racer with tons of replayability, and plenty of customisation options to make each win count.

Pacer is a nice Wipeout homage, but still needs a bit of work | Hands-on preview