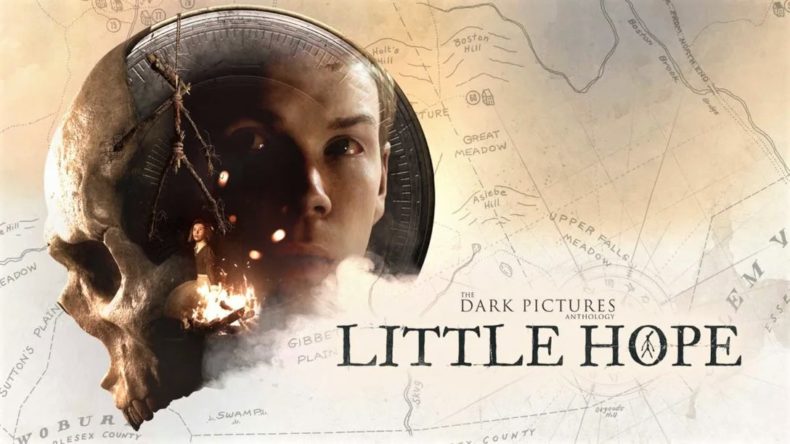 Supermassive Games is well-known for its branching narrative horror titles. With Until Dawn and Man of Medan under their belt, our attention shifts to Little Hope, the second title in The Dark Pictures Anthology. It’s a standalone story, meaning you don’t have to have played Man of Medan to understand and enjoy Little Hope. And that’s a good thing because this is one horror title you really should take a look at.

Little Hope swaps the claustrophobic ghost ship aesthetic of Man of Medan and opts instead for a creepy abandoned town on the American East Coast. It takes inspiration from the witch trials of Salem and nearby Andover in the late seventeenth century. The story begins at night – obviously – with a bus crash that strands our five protagonists at the edge of Little Hope. They have no option but to venture further into town to get help. As they proceed, they encounter weird happenings both in the here and now, as well as uncovering Little Hope’s dark past.

The story feels right out of a Halloween horror film, feeling closer to Until Dawn than Man of Medan. The cast themselves look a little different, in age at least, as the usual plucky youths are also joined by two older characters in Angela and John. It’s refreshing to interact with characters more physically frail than usual. They feel like they “need” protecting more and that’s a new feeling compared to traditional horror games.

The casting choice also allows Supermassive Games freedom with the writing. Too often protagonists in horror media seem unperturbed by what’s happening to them. They blindly accept everything, no matter how shocking. But in Little Hope even confident characters are left in shock, panic, and disbelief on numerous occasions, and this helps land the gravity of the peril they face. It’s also incredibly refreshing to have a cast that doesn’t naturally get on with each other. Sure in Man of Medan you could be a dick to each other, and there were a few fault lines established in Until Dawn too, but right from the off in Little Hope, there are clear battle lines drawn. It allows for some great snarky or witty one-liners in between the madness.

Little Hope looks beautiful too, and even on a standard PS4, the game looks really pretty, if that’s the right word to describe the haunting setting. Everything looks, well, real, for want of a better word, and it’s clear particular effort has gone into the character models and animations. It feels like a significant step up from those in Man of Medan. This, coupled with the aforementioned writing creates a cohesive, believable set of characters and a dark, dreary environment that’s dripping with a foreboding atmosphere.

Speaking of which, dark is definitely the word to describe Little Hope. Whether you’re outside in the woods or exploring abandoned buildings, the absence of light is incredibly effective. The odd electric light does puncture the darkness, but mainly you’ll be relying on mobile phones, flashlights, and the moon’s pale glow to find your way. And the fear of what you can’t see creates residual tension to great effect. You never quite know what’s around that next corner, or just on the edge of the light cone of your flashlight. 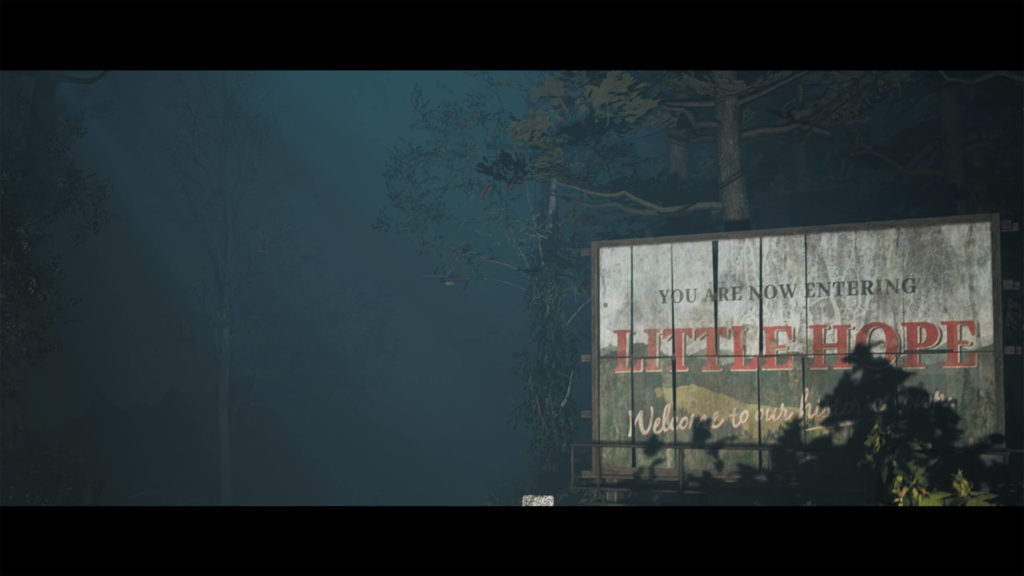 That said, Little Hope doesn’t shy away from being forthright with its scares too. As the player, you’ll notice disturbing things before the characters do, if they even notice them at all. And the unknown coupled with their blissful ignorance often puts you on edge. The move towards both fixed and dynamic cameras allows for some devilish perspectives that got my heart racing and eyes widening. This, as well as the well-placed jump-scares, created an overall experience where you couldn’t ever quite relax, but in a good way.

Whilst the dynamic camera is largely a success – you can now freely move it around in many areas as you explore – it did let me down on occasion. In such a dark game where you control the camera and the direction of your light source, it can sometimes become disorientating to control and see where you’re going and what’s in front of you. For the main story path this wasn’t a problem, but it was whilst looking for clues and collectibles that were off the beaten track. The character movement has significantly improved compared to Man of Medan, but it often didn’t help in those dark corners.

The multiplayer modes are present, with Movie Night and Shared Story mode both returning. Movie Night is the better mode for first-timers so that all of you locally can enjoy the story blind together, and in that setting it works well. Shared Story mode on the other hand is a little more mixed. Here, two of you play online, each seeing the story from different perspectives. But when characters split up you can miss out large chunks of the story and be left a little bewildered, with the emphasis being on replaying the mode again to see what you missed. 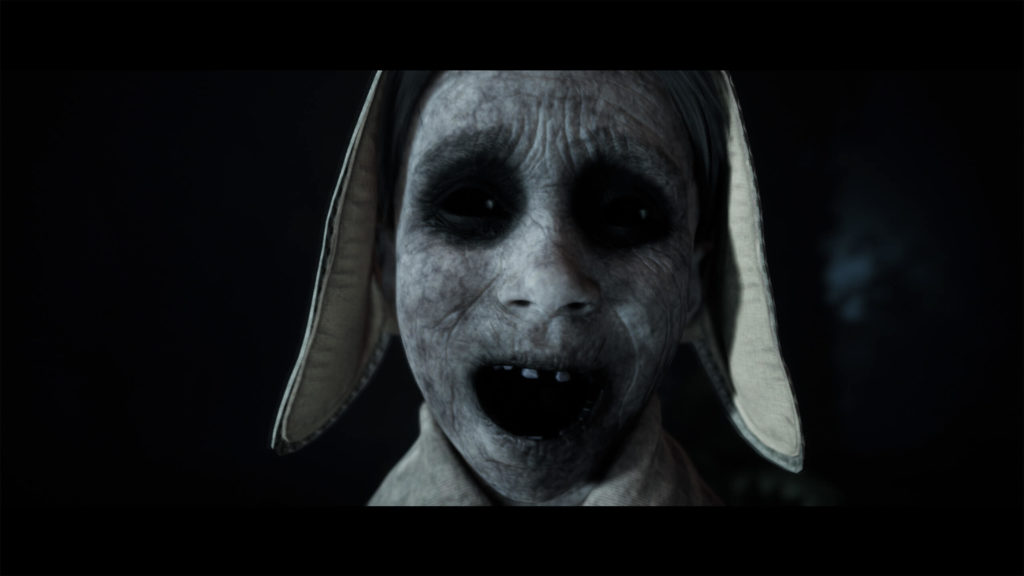 That would be fine except the flow of events feels more crucial in Little Hope, than in Man of Medan. Story gaps will tend to confuse rather than intrigue you, making it fall slightly flat, even though the main story beats remain. What it does have going for it is unique scenes you’ll not see in the main Theatrical Cut of the story, offering a fresh perspective. These additional scenes will make up the Curator’s Cut of the story, which is coming later unless you pre-ordered the game.

Ultimately though Little Hope has to live and die – pun intended – by its branching narrative that has become a hallmark of the series. The choices you make should affect how the story unfolds and the lives of the cast. Having played both Until Dawn and Man of Medan to death – and I promise the puns will stop now – I can say that I think Little Hope has the best branching narrative we’ve seen so far from Supermassive Games.

One area it’s really noticeable is in the character interactions. As a character makes a decision, either with their heart or head, their prevalent characteristics change. Responding in a certain way might make your character more amiable for example or more reckless. This was the case in previous games too, however in Little Hope, it seems to really affect a character’s mood and it can have a real impact on many of the group discussions. In previous titles, these felt more like off-the-cuff comments, but in Little Hope, entire conversations can change. People who were cordial to each other can be snooty and derisive thanks to your previous choices. And the dialogue doesn’t feel forced or disjointed either.

Then there are quick decisions you need to make in the heat of the moment, and often the outcome of which isn’t clear up front. It creates tension, even panic, that’s perfectly in keeping with the setting. QTEs make a return but they feel sensibly used in key moments to enhance the drama, and they’re achievable to complete too, assuming you can stay calm and react accordingly. Special mention does need to go to the option to remove the QTE timer, as just one of a slew of accessibility options available in Little Hope. A lot of consideration has gone into how everyone can enjoy it, whatever their needs and Supermassive Games should be commended for that.

But do these decisions, characteristic changes, and QTEs actually affect the story in a meaningful way? Well, this, I would say is where Little Hope really shines. They absolutely do, and often, you might not even realise you’ve affected something until it’s too late. Indeed in my first playthrough, it wasn’t until I lost my first character, that I started to understand and appreciate what was kind of maybe going on. I’ll admit to not piecing everything together before the big reveal towards the end, I definitely had that “Oh I get it now” moment. I will say some people may not like the way Little Hope plays out, but I did, and when the credits rolled I went straight back to start it all over again.

Because it’s on a second playthrough that you notice things you missed the first time, with a new perspective. Oddities seemingly in the writing or even the logical explanations for things suddenly become clear. And then you realise that this is a well-told tale, that was always shooting in the right direction. Then, when you overlay the different outcomes, and various scenes you can have or skip entirely depending on your choices, it’s clear this is an incredibly solid branching narrative adventure.

Little Hope works as a horror experience because it keeps you on your toes throughout. It’s curious story is interwoven with an eerie setting that’s masterfully navigated through solid camera selection. The dialogue feels believable as do the characters and there’s a good mix of jump scares and uneasy foreboding to give it the horror clout. The decisions you make really make an impact demonstrating just how much thought has gone into the different outcomes. It’s an excellent adventure and one that you really will want to play again and again.

Little Hope has some of the best branching narrative that Supermassive Games has ever done, it looks lovely and packs a horror punch throughout.