I am by no means a hardcore racing fan, but every now and then I’ll connect with a game thanks to its accessibility and overall enjoyment factor. I loved DIRT 4, and Codemasters has done it once again, producing a superb rally game in DIRT 5, with tons of race modes and classes to try out. The controls take care of veterans of the series or casual drivers who want a challenge thanks to the wide range of Driving Aids. You can make the transmission automatic, make sure traction and stability are overly secure, and even leave braking to the computer so you are free to focus elsewhere.

Handling the wealth of different cars across the 10 countries is, for the most part, sublime. The terrain varies depending on where you are in the world, but due to the excellent design and attention to each car’s specifications, drifting around corners and sprinting down long straights whilst trying to overtake is exhilarating. You constantly feel challenged regardless of the car class or track, but some require a bit more skill. Sprint Cars were the most awkward for me to master as they are fast little machines with four different sized wheels, and making sure you get around the oval-sized tracks successfully requires much more practice than those used in a Rally Raid. 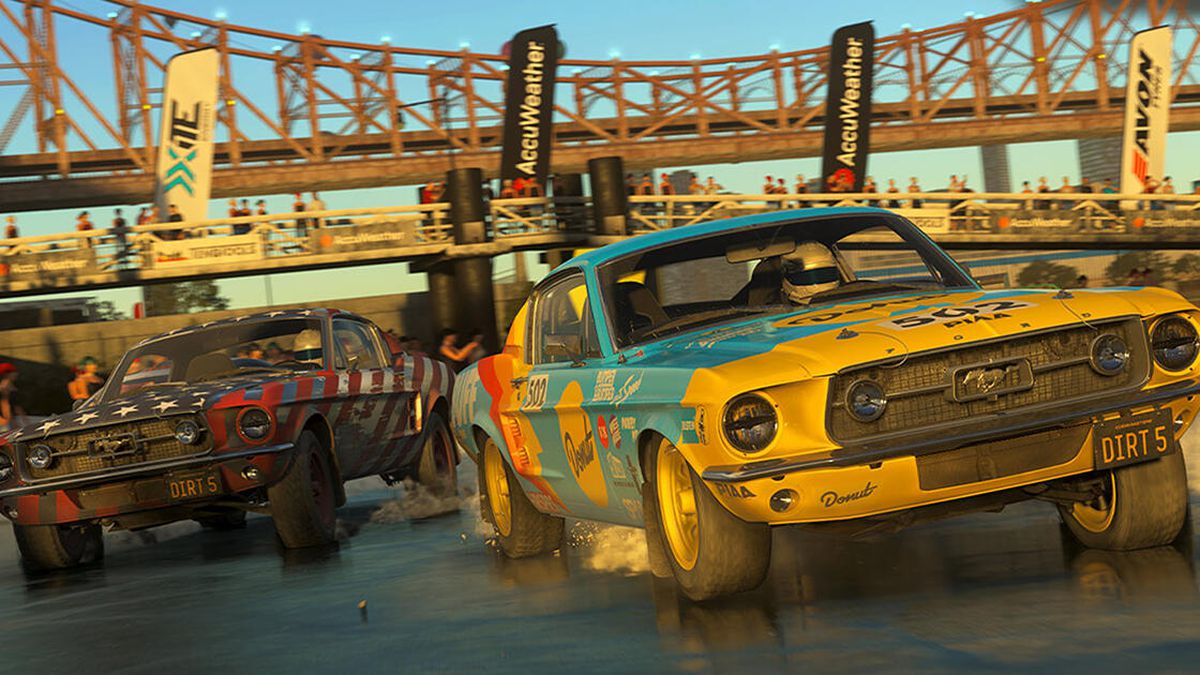 There are tons of cars on offer, and as you progress through the Career and earn money to buy new ones, there’s something for everyone. Buying new cars with improved torque or horsepower becomes an addiction. You may find you stick with certain cars throughout (I’m looking at you, Volkswagen Race Touareg 3) , but it pays to experiment as new courses provide new challenges. This is what makes DIRT 5 such a fantastic game to play. There are so many different race modes that each race feels different to the last.

Rally Raid offers the familiar point-to-point race across harsh terrains, with paths that split off, awkward bends to master, and jumps that need to be taken head-on for maximum effect. Ice Breaker is probably one of the more tricky modes, as you have no real traction when driving around an ice track where drifting is key, and one false move can cost you first place. Path Finder is another tough mode, as the terrain is bumpy, steep, and everything in between; speed takes a backseat and making your way over the many natural obstacles requires patience. Land Rush offers punishing circuits where weather causes havoc on the track, and competition is fierce as you complete laps across varying corners and challenges whilst beating other hungry drivers. 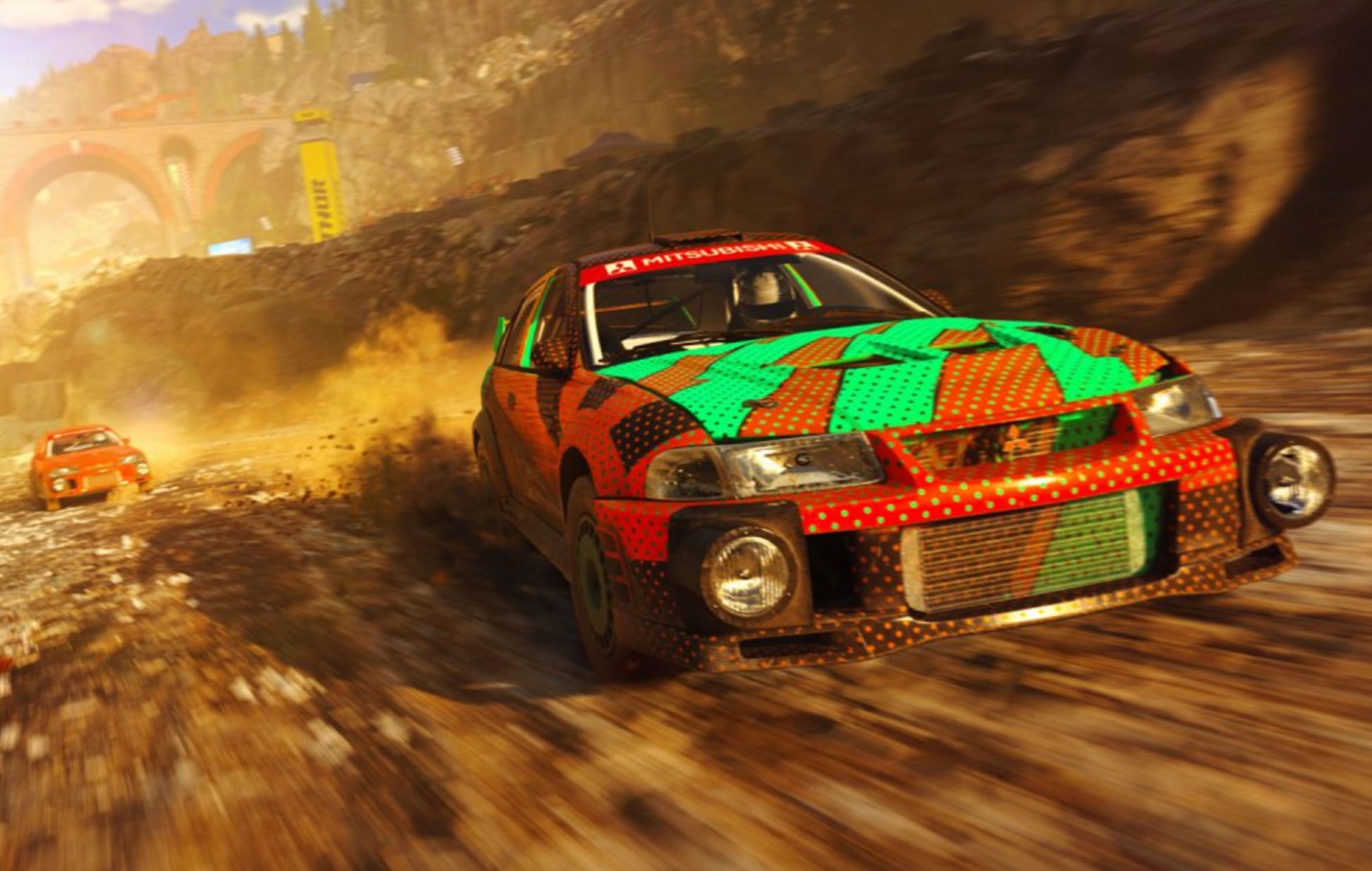 The Career is the standout mode in DIRT 5. It takes full advantage of all of the different race modes and car classes as you compete to become the best rally driver in the world. The higher you finish, the more stamps you earn, and in turn the next chapter will unlock. Each chapter has tons of races, and you can play the bare minimum of competitions or compete in every single one. Money and XP is earned in every race, but the better you do the more you’ll earn. There are also mini-challenges to complete to make payday more rewarding, such as maintaining a certain speed for a set number of seconds, or grazing the paint of fellow drivers whilst in mid-air or drifting around a corner.

The story is made more enjoyable thanks to the calibre of acting behind it. Alex Janiček, or AJ to his friends, is voiced by Troy Baker, whilst his fiercest rival is voiced by Nolan North. As you progress, you’ll learn more about both characters, and how your own journey factors into their rivalry. Throughout your career, you’ll often hear the DONUT Podcast broadcasting as you pick your next race or buy a new ride. Hosted by James Pumphrey and Nolan Sykes, these interludes provide the exposition whilst being entertaining at the same time. What DIRT 5 lacks in cutscenes, it makes up for in its audio presentation. 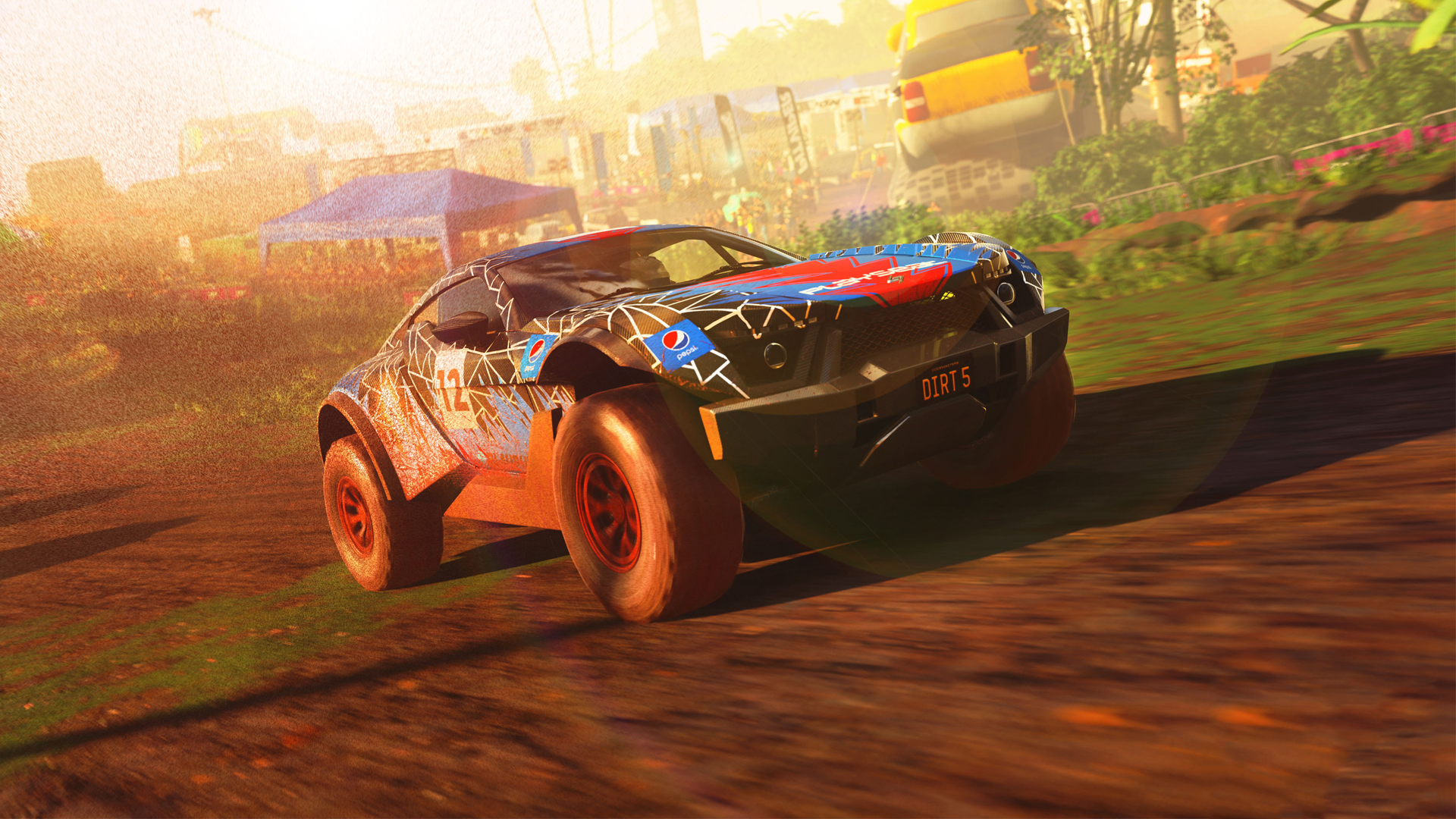 As well as competing in a myriad of events, AJ will also bring your attention to certain Throwdowns with popular racers, and by beating them in one-on-one competition, you’ll unlock exclusive rewards. They offer a nice distraction from the main events and give you a little something else to do. On top of racing to continue through the chapters, you’ll also be required to pick different sponsors that each offer their own set of rewards. By completing their Career Objectives, you’ll earn more money, as well as acquiring bonuses if you stick with them for longer. Rep Points are earned after every race, and at certain levels you will unlock new patterns or decals for your car exclusive to the brand you decide to go with.

You can access your Garage whenever you want, and this allows you to buy new cars and customise them however you see fit. There are some beautiful beasts on offer, such as the Porsche 959 and the Ford F-150 Raptor, and whether you want a new 80s Rally, RX Rally Cross, or Super Elite car, the options are plentiful. In the Livery, you can change patterns as long as you’ve unlocked them, the colours across the various channels, and what decals or sponsor logos emblazon your vehicle.

DIRT 5 has to be one of the prettiest racers I’ve seen. From the colourful menu screens and the races themselves, Codemasters has put in a lot of work to make sure it stands out. The different countries are beautiful and diverse, from the Northern Lights of Norway to the bamboo-filled forests of China, every location is gorgeous. The car designs are detailed, and the way the light and rain bounces off them as you get them filthier continues to impress. The soundtrack is also a thing of beauty, featuring multiple licensed artists across a range of genres, meaning there’s something for everyone. Props for featuring Twin Atlantic and New Found Glory!

Arcade Mode lets you try out every track on offer, and lets you play with friends in four-player split screen. Not only can you play with friends here, but there’s also a drop-in/out function in the career mode which is pretty cool. DIRT 5 also allows you to create your own crazy courses in Playgrounds. Here, you can choose from different jumps, obstacles, and blocks to make something monstrous. You can then save and upload for others to have a go with, or ride around ones that others have made. It’s nothing special, but it does let you create big jumps over double decker buses and through rings of fire. The true success of this mode lies at the creativity of those who spend time creating; only time will tell.

DIRT 5 is an excellent racer with tons of race modes that allow you to experiment with all the cars you have at your finger tips. The Career is fun and challenging, and the sense of progression is satisfying. Some of the modes are tough to get to grips with, and I wasn’t a fan of Sprint, but there’s so much more that it never felt like I was stuck for a good time. DIRT 5’s online mode promises to be yet another great addition to the game, but at present we haven’t been able to try it out. As soon as players are populating the servers we intend to dive back in and give you the lowdown on how the Vampire mode works, because who doesn’t want to evade a vampire car? With some great presentation and a banging soundtrack, DIRT 5 is an excellent step up from the last entry in the series, and I can’t wait to dive in to the online modes.

Dirt 5 is an excellent rally racer offering plenty of race modes and car classes to choose from. The Career mode is engaging, and the presentation is gorgeous.