Until Dawn: Rush of Blood Review 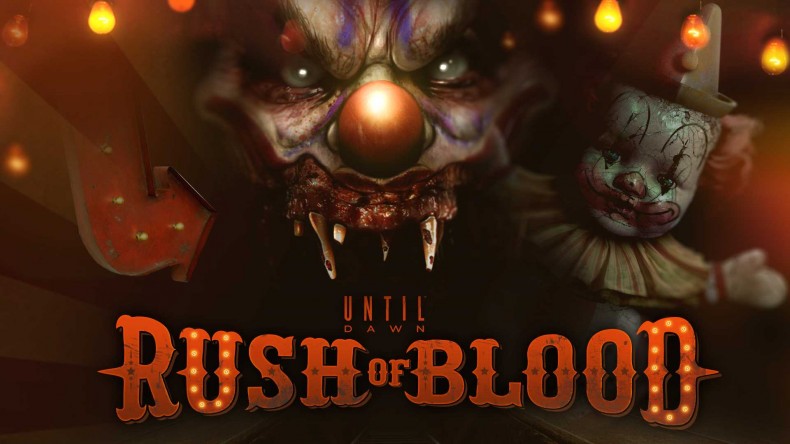 From the moment it was announced, Rush of Blood had my interest. Until Dawn was a blast and, quite frankly, more of that universe is a good thing. Ditching the narrative, character interaction drama type gameplay, this PSVR title is an on-rails shooter, with you sat in a rollercoaster car, travelling along the tracks throughout a psychologically terrifying ride.

I should be clear, I’m not actually afraid of clowns. I know it’s a common fear, and although they’re creepy, they don’t really scare me as such. But on the other hand: fuck clowns. Seeing a giant, horrific clown face above you as you enter the level is the touch of a developer that knows it’s playing games with you. At first, the worry is that it relies on jump scares, because without the story of Until Dawn to push you along, jump scares can’t carry a game. And, sure, while it does rely on them a lot, there’s a mental aspect that plays with you. For example, on the second level (one of the shorter ones), you start in complete darkness. For some reason the torches that are ever-present (except when they aren’t) on your guns are off, and you can hear a girl singing a song. At first, nothing happens, until you realise you’re supposed to look for her. “Please don’t make me look into the darkness”, you think, but you have to. You see her, still in the distance, singing; disappearing again. “I know if I turn back the other way something is going to make me jump. I know that. Everything I’ve ever experienced in horror games makes me know that”, you think. But it’s just the girl again, singing. Then you turn back the other way and she’s right in your face, a ghostly, horrific girl, just like those awful Facebook videos that tell you to “click here” and a ghoul screams right in your face. Incidentally, if you post those videos, you’re a prick.

But yes, it’s an on-rails shooter, and a pretty decent one. I played with Move controllers, so I held a gun in each hand, and your target aiming is thanks to the torches on top of the guns. Run out of ammo and you just click the front move button (the triggers shoot, obviously), and that’s really it for the shooting. There are targets littered everywhere to increase and keep your multiplayer going, and I can’t tell if it’s intentional or not, but they almost act as a distraction to the actual enemies that climb from behind hidden areas to assault your cart. They’ll swing at you and damage you if you don’t kill them quickly.

The level layout is straight from Until Dawn: doll houses, severed pigs heads, buzz-saws, you get the idea. Often courses will require you to physically move out of the way of things that will hurt you. You can pick up new weapons (the shotguns are ace and feel heavy and explosive), and there are lots of trophies for finding things you can shoot that are secreted away within the levels, or for finishing a mission using only one gun, or with a high accuracy.

Over the seven levels you’ll be entertained and frightened. I don’t consider myself someone who is easily scared by horror games, it tends to be the more psychological ones that get me, and with each level’s finish showing you a little more of the story, the longer you play the more traumatised or numb to it you become. The fact VR means it’s all right in your face is why it works so well, and indeed, Rush of Blood feels like House of the Dead with added ghostly elements and less schlock.

Repeated score attacks, multiple routes through levels, and attempts on the higher difficulties are where the longevity lies, but if that’s not your bag you’ll still get your money’s worth out of this one thanks to the cheaper price. It may not revolutionise VR (there are lots of games like this on PC) or the horror genre, and it may only be Until Dawn by hook of the aesthetic, but for Sony’s fledgling VR device it’s a damn fun time, even if my arms did ache from holding those guns up for so long.

A genuinely scary on-rails rollercoaster shooter, Rush of Blood takes Until Dawn in a new direction without losing any of the horror.