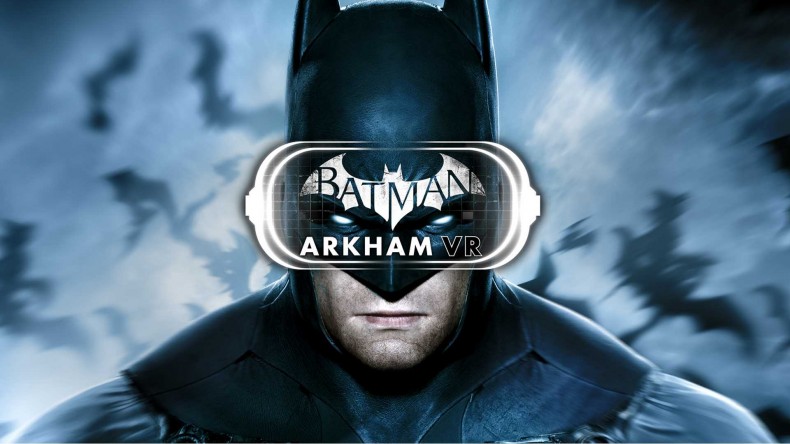 The idea of slipping on the cowl and becoming one of the most iconic superheroes in history is a tantalising one. But the idea of doing that in a game developed by Rocksteady (the architects of the best Batman games, nay, the best superhero games ever) especially for VR on Sony’s new bit of tech, well, that’s enough to make your granny wet. While it’s not a manifestation of the Arkham series in VR, it’s damn close, and it takes advantage of everything PlayStation VR has to offer.

Firstly, it’s a game that is better played standing up. With a Move wand in either hand, this is one of the few PSVR launch titles that I feel needs a decent sized area to get the most from. While it does work with you sitting on the sofa, it’s awkward played that way. No, Arkham VR wants you to stand up, pick up the cowl, and throw your batarangs around unfettered by sofas and floors. But it’s worth mentioning, this isn’t the full Arkham experience. You won’t be swinging from the rafters, stealthing up to bad guys and beating them up. This is Batman in full on detective mode. You start as it always starts: a brief origin story, but it’s never felt so real as you (as young Bruce) cower in the shadows as your parents are (spoilers, I guess) gunned down in front of you. Arkham VR (like all PSVR games) isn’t as good looking as VR games on PC, but it’s by far and away one of the best visual showcases of PlayStation VR. If you look away from your immediate areas you’ll see shimmering edges where it’s not as high resolution as it could be, but the lighting and facial renders look excellent here. Rocksteady has, as usual, captured the darkness of the city, and importantly, delivers on some really cool moments.

Sure, Alfred handing you a key to open a piano and descend to the Batcave may not be that thrilling, but physically picking up the cowl and place it on your face, before testing out the grapple hook and batarangs – well, that’s seriously cool. Bringing up the Arkham Knight version of the Batmobile (sorry if that brings back bad memories, but the game was amazing so wind your neck in) right before your eyes is the stuff dreams are made of, and Rocksteady knows it, allowing you to move it around and inspect it; this is VR, after all. As the story hits its strongest gameplay moment, you really feel like you’re in the game, and there are some parts that really stand out. Detective mode is deeper than ever, and uncovering crime scenes (especially when the victim is close to you) are more interactive than ever. The first sees you have to physically scroll through a timeline watching a crime take place, before noticing there’s an eyewitness that you need to track. To do this you must (again) investigate, and find a palm print – a moment where the onlooker touched something – which, in turn, lets you track the poor soul who saw this brutal murder. It’s a story that’s delivered well thanks to the voice talent involved. For many (myself included), Kevin Conroy is Batman, so he reprises the role and does as formidable a job as ever.

That said, it’s also a story that’s over within the hour. That’s not to say it’s too short, but by the time it ends (despite having a strong closing moment) I did want more. Thankfully there are Riddler trophies unlocked for each scene after you complete the story, and they’re taxing, while also making great use of VR. There’s a number of trophies that are for finding and exploring elements within the scenes, but the story itself took me around a 60 to 90 minutes to go through.

Movement in VR is something that’s still in the early days. Some games allow you free movement with the sticks of a controller. Some (HTC Vive, for example) allow you to move within a set area, then warp to a location. The latter is how Arkham VR handles things: you can warp to pre-designated points in a scene and turn fully 360 degrees – which is another reason it’s best played standing up. You can interact with objects by pointing your virtual hand at them and clicking the trigger, but sadly the immersion can be broken here. Let’s say, for example, you can see a photograph of Bruce Wayne as a child, standing with his mother and father. Touching, sure, but let’s pretend you want to pick it up and throw it right at Albert (your loyal butler and confidante) – right in his face. Amazingly, you can do this, but after a few seconds the picture will magically reappear where it was first seen. I suppose at least that means you can just keep throwing it in his stupid mustachioed face, but it does remind you that you’re in a game.

But for all those minor flaws, despite the fact you can’t take part in actual combat, this is a superb experience that is enhanced depending on how big a fan of Batman you are. Even if you don’t like the caped crusader, you’ll find a lot to enjoy about Rocksteady’s first attempt at a VR game. It’s not quite ready yet to replace the style and brilliance of the Arkham series as your go-to Batman game, but this could be the beginning of a very special new relationship with Batman, and I sincerely hope we get more like this.

Actually makes you feel like Batman
Some memorable moments
A proper, near room-scale VR experience

You've never quite been the Batman like this, and despite some silly immersion breaking moments, this could be the start of a brand new and exciting Batman experience.