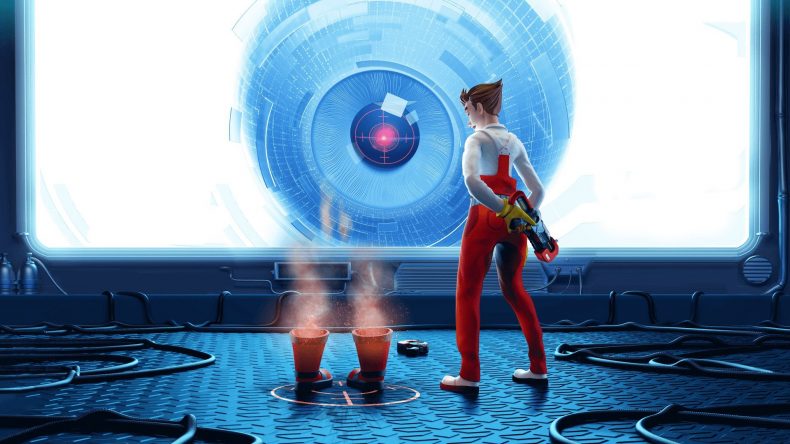 If you’ve ever had a paying job working alongside any group or team of people, you’ll have likely come across a “brown nose” at some point. That person who just loves to throw others under the bus; the sort of person whose always in the boss’s office before the morning coffee, ready to hop, skip and jump over the rest of you for the chance of a belly rub and a bit of attention. In fact, I’d go so far as to say that if you’ve never met that person, you probably are that person.

Well, Paranoia: Happiness is Mandatory is full of NPCs who are just like that, and quite often the only way to beat them is to pucker up those kissing lips and join ’em.

Based on a boardgame RPG created by Greg Costikyan, Dan Gelber, and Eric Goldberg in the mid-80s, Paranoia takes place in a cheerily grim facility in the future called Alpha Complex. Your character is a clone, born in a tube and disgorged, fully grown, into a working life serving the interests of Friend Computer, a highly advanced AI that rules Alpha Complex with an iron fist and a winning personality. As a Troubleshooter, your role is to carry out Friend Computer’s wishes unquestioningly, no matter what they are. Each daycycle you’ll attend a meeting with R&D, who will task you with testing some new form of populace control device, and then report for a briefing with the Computer itself, who will give you your assignment for the day.

Each assignment will see you fighting against “traitors”, which is anyone who does not utterly conform to Friend Computer’s ideologies and standards. From escorting a rogue cleaning droid to wiping out a dangerous group of LARP enthusiasts, or investigating murders, thefts and acts of general terrorism, you’ll do what you’re told when you are told and you’ll do it with a smile on your face. Only traitors are unhappy, and so happiness is mandatory.

Missions will usually take you into the various areas of Alpha Complex, where you’ll wear colour-coded uniforms to determine how high your clearance level is for the day. Straying out of your assigned zone is tantamount to an act of treachery, and every time you commit one of those a percentage meter will build in the corner of the screen. When it reaches 100%, Friend Computer will order your termination and you’ll either need to disgorge another clone (you have six in total), or begin the whole thing again. Unfortunately for you, everything except blind obedience is an act of treachery. Failure to take your happy pills, questioning Friend Computer’s orders, making jokes, deviating from the mission, or failing to report an observed act of treachery by one of your fellow Troubleshooters will all add to your traitor level. It makes you pause and consider every line of dialogue and every action in the game world.

You’ll assemble a team of Troubleshooters for each mission, but all have their own personalities and foibles, so you’ll need to behave a certain way in front of them to avoid suspicion, especially if you choose to work alongside one of the many factions you’ll meet planning to overthrow the Computer or otherwise sow anarchy in the Complex. Violence is an accepted part of life, and you’ll often be asked by R&D to test things on the populace such as a rocket launcher or a new form of fizzy drink that can make a person blind or mad.

The sinister undertones are a constant element, and it’s almost disturbing the first time you throw one of your fellow Troubleshooters to the wolves to save your own skin and watch them get obliterated. Admittedly, the fact that they’re freshly clones and back on duty the next daycycle is a bit of an immersion killer, but it still made me feel guilty. Sometimes your teammates will disagree so strongly with your actions that they will leave your party and won’t rejoin it until you’ve visited a Confessing Booth, or performed some form of penitence in front of them. Sometimes you’ll even be forced to sentence them and kill them, or defend yourself against them. Also, be aware that they’ll happily shop you to the Computer for minor infractions, and arguing your case will only make it worse.

Combat is handled in real time, with your group armed with various laser guns, grenades, and melee weapons. They’ll hide behind cover if you position them right, but ultimately it’s a case of every man for himself. Deaths of teammates are permanent, while your death will force a restart or use of a new clone. Combat is a little floaty, tbh, and the tide can very easily turn in a fight. Shot success seems to be a matter of percentages calculated quietly in the background, as the same encounter played through twice can have very different results. I know this because I died quite a lot, as you probably will too.

Sadly, the checkpointing isn’t great. There’s no manual save so it’ll autosave at set intervals or at the beginning and end of a mission or daycycle. Once or twice I died having completed a large chunk of a mission and had to replay the whole lot, which wouldn’t be so bad if Paranoia didn’t require you to walk and talk quite so much. Some missions are made up almost entirely of waking back and forth between stubborn NPCs who want you to perform busy work or some other inane task before you can proceed. It fits perfectly with the world, of course, but that doesn’t stop it being tedious, especially when dialogue is in text and none of it is spoken. You’ll be reading an awful lot.

At times Paranoia is genuinely funny, though. For instance when the Computer promises to carry out the follow up maintenance to a job you just risked your life to complete, and gives you a time frame of “four-thousand day cycles”, highlighting exactly how unimportant your actions really are. In fact, uselessness is a strong theme in Paranoia. You’ll often feel you’re being given things to do just to keep you busy, and there’s something far more nefarious going on. As you progress through the story and begin to question everything, you’ll realise that there is much more happening behind the scenes than you first thought.

Skills chosen when your clone is born will allow you to interact with the world in various ways. Beuracracy and Psychology help you read others and influence them, Tech and Craft skills allow you hack machines easier or create buffs and healing items, while Melee and Guns improve your combat proficiency. Some dialogue choices and actions will require a certain level in a certain skill, and these choices often open up new avenues you’d otherwise miss. Graphically it’s nothing special. You’ll likely not need to adjust settings even on a mid-range machine, which is good because there aren’t many settings to change. Everything is bright and colourful, with character sprites showing little detail and most environments having a naturally sterile aesthetic.

Paranoia: Happiness is Mandatory is a fun RPG set in a unique, intriguing world that constantly surprises and amuses the more you investigate and question. The “traitor” system is just excellent too, forcing you to consider your every action. The combat could be more exciting and its over-reliance on walking and talking can stray too close to boring for comfort, but it remains a challenging and rewarding experience nonetheless.

Lots of walking and talking
Combat is a bit bland

The combat could be more exciting and its over-reliance on walking and talking can be a bit tiring, but Paranoia: Happiness is Mandatory remains a challenging and rewarding experience nonetheless.