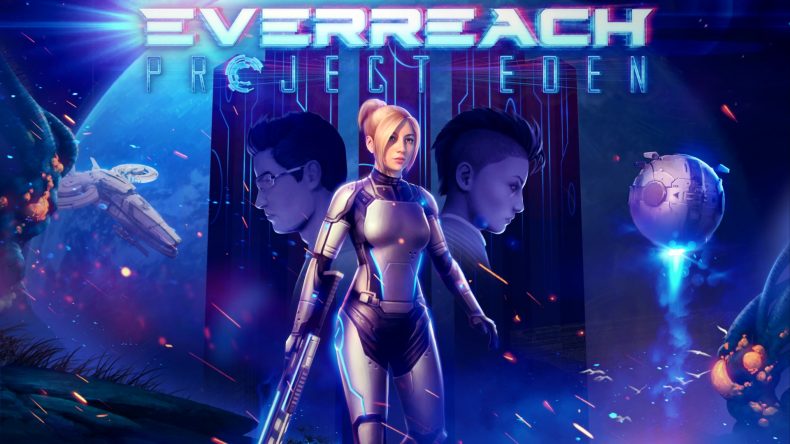 I went into Everreach: Project Eden with my mind as open as possible. Here’s a game developed by a tiny, ambitious team, aiming for something akin to Mass Effect but on a smaller budget. While you have to commend the efforts of developer Elder Games, it’s hard not to feel like Everreach needed another year of bug-chasing and polishing.

Your protagonist is Nora Harwood, an operative working for Everreach, a terraforming and colonisation company whose settlement on Planet Eden has come under attack from a rebel cell calling themselves Eclipse. Shot down en route to the main base of Nova, Nora finds herself helping the colonists re-establish order and overthrow Eclipse.

What struck me as really weird is that, upon landing, the liaison tells you that she has no personnel with military training to go out and retrieve supplies, etc, so Nora will have to volunteer – but then in the very next room there’s a soldier who tells you about the last mission his squad was on before giving you yet more busy work. It comes across as a bit clumsy and contrived. Actually, the dialogue and writing is a good place to start. While the script has a few funny moments (73, the droid that flies around with you to provide intel and upgrades, is particularly amusing at times), the delivery is incredibly flat throughout. Nora in particular sounds like a stereotypical cheerleader who wandered into a military drama, spouting words that sound out of place from her mouth. Not sure if it’s the direction or the action, but her voice is a monotonous drawl that sounds utterly unbelievable as a hardened soldier. The cutscenes are also very odd and uncomfortable to watch, as characters sway from side to side and the camera crudely jumps around, panning in random directions and switching angles for no reason. A Fallout-style, face-to-face PoV would have worked much better, although that would further highlight the bad lip-synching.

As for the actual gameplay, while the ability to upgrade Nora’s suit with scrap and parts scavenged from the world is a decent enough reason to explore and loot, the gunplay and exploration leave a bit to be desired. For a start, the shooting feels imprecise, and I had to turn the mouse sensitivity way down because the default is insane. The guns have very little impact, and it lacks a cover system that actually feels missing, as though it was meant to be here but isn’t. There’s plenty of low cover and walls to plant yourself against; you just can’t. Instead you have to just retreat and stay low until your shield refills.

Like in Mass Effect Nora can unlock secondary powers tied to her suit that work on a cool down system. Sadly, they don’t feel essential, and for the most part I forgot I could do anything but shoot. Also, for a highly trained soldier in a super suit, Nora seems to be very stiff and cumbersome. There is also some really strange editing at work in the cutscenes, where some more complex character animations are simply not present, meaning one instant you’ll see Nora prepare to dive, and the next she’s simply in position thanks to a jarring cut. But any section on foot in Everreach is a hundred times better than when the game forces you to break out the hover bike. Honestly, I’d sooner this was just completely left out. The bike handles horrendously, with the slightest touch sending it swinging. You can target drones and droids but not human enemies for some reason, and the damage it takes just from clipping a low rock or bush renders it close to useless. The first time you have to use it as you’re chased by an aerial gunship is maddening, and goes on and on and on. It even sets waypoints of, say, 250m, only to simply extend it by another 250 every time you reach the end of one. It’s just very poorly implemented and frustrating.

I’m not trying to be harsh on a small independent studio, but while I’m a big supporter of indie developers, I’m also a big believer in working to your means. I’d sooner see an indie game released with fewer features if all those features come together to produce a fun an enjoyable game, but in Everreach they simply don’t. The studio has reached too high in this case, and failed to grasp its target.

Everreach is certainly not a terrible game. In fact there are several “AAA” titles this year that I’ve enjoyed much less, but it needs more time and more attention to be considered “good”. Hopefully Elder Games will continue to support and patch the title post-launch, as there is definitely potential here.

Everreach has potential, but it's not there yet. Hopefully, Elder Games will continue to support it post-launch.