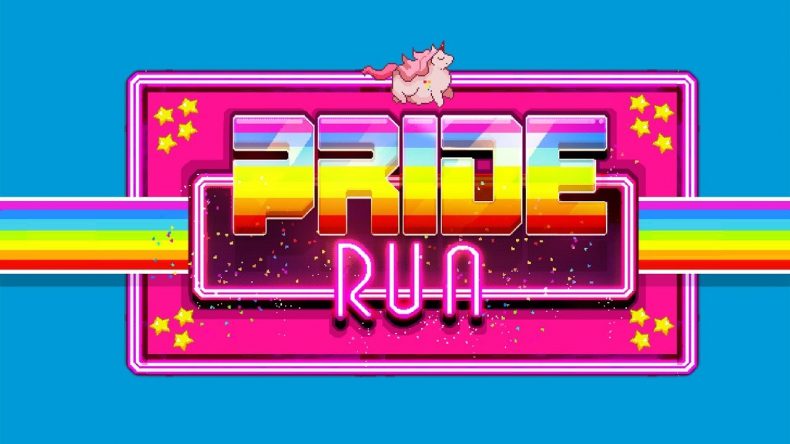 A good rhythm game, at its core, should be about making you feel good. Nothing beats that warming shot of serotonin when you nail a certain section. It’s a lovely ego boost and often a flurry of upbeat music and cheers from the crowd are your reward. That’s what keeps us coming back for more, time and time again. If on top of that you can throw in a point of difference, competent execution and some memorable tunes, you’re well on your way to something pretty great. Pride Run, the latest offering from IV Productions, aims to be just that. With more than a sprinkling of unicorns and rainbows.

The backdrop to your rhythmic enjoyment is various Pride festivals, celebrating the LGBTQ+ communities. The more competent your performance, the larger the Pride marches get and the cheers and whooping gets louder. The different tracks in the game each represent a different city that your marches take place in. In terms of keeping rhythm, that’ll seem very familiar, with single or double button presses and button holds as the input methods. Play with a controller, and they’ll be mapped to the four main buttons, as you would expect.

Get to the end of your march, and Pride Run throws one of its new big ideas at you. Boss Battles give the leader of your march a chance to take on an anti-pride figure from the city. Sometimes these will be recognisable figures like Donald Trump or Vladamir Putin. Other times you’ll be facing off against stereotypes from the country you’re in. Victory here comes when the pride bar reaches all the way over to the right-hand side. To move it, you must tackle some quick-fire minigames requiring you to keep in time with the music among other things. Succeed, and you’ll get closer to your goal, fail, and the pride bar moves to the left, undoing some of your good work. Winning each boss battle sees you unlock the next location on your global Pride tour. So far, so good, but it’s fair to say there are some noticeable frustrations even this early on. Firstly, if you’ve played the tutorial, this may actually count against you. This is because the game tells you to press the button inputs as they reach your vertical line marker. Frankly, this is nonsense: press it then, and it’ll be too early. The correct time is when the input has passed almost completely through the line. A small point maybe, but a pretty critical part of a rhythm game is keeping time, and this seems to be a little off. The same is true of the indicators during boss battles when they specify when to press to be in time with the music. The solution? Just trust your ears instead. Press buttons in time irrespective of specifics on the screen and you’ll be fine.

Other frustrations I encountered were if you miss a “hold” input, your game is essentially over. For some bizarre reason, Pride Run counts every beat of the hold separately, which is great if you nail it, but if you mistime the start, you fail all the rest. And like all such rhythm games, missing so many in a row is game over. Keeping track of the rhythm can also be tricky if you’ve missed a couple of notes. There’s even one boss battle where the music is particularly low-key that I struggled. When you have to trust your ears over your eyes, this makes failing for this reason, feel unfair.

However, this game certainly isn’t terrible, especially if you follow my advice. Do yourself a favour, play this game on the hardest difficulty you can. Do the tutorial and then go for it. Trust me, that way you’ll get the most out of this mode. The beats will be more forthcoming, you’ll feel part of the tune, and enjoy yourself more. Nail a particularly tricky or lengthy section and there’s that serotonin boost too. The songs have no vocals and stick to retro-style music to align with its visuals. Therefore, feeling the tune is critical, and more likely when you have more inputs on a harder setting. Boss Battles also feel more of a challenge this way. Mistakes are punished but it still feels fair. True there’s a lot of hammering buttons in these minigames, but seeing Trump in drag is a reward forever etched in your memory. Whilst you’ve been nailing the beats, you may not have noticed what’s been happening on-screen as your pride parade marches through the city. You’ll hear various noises and icons flash about the place, but likely not give them a second thought. Well, that’s all about to change as you uncover the game’s second mode, Play Hard. This mode is completely separate and more an RTS mode than anything else. Here you’re managing who walks in your parade, who leads them, and in what formation. As you march, you can move people about and perform actions to attract onlookers to join you. You will need to shield your troupe from the haters’ angry energy. Otherwise, they’ll prevent you from performing actions for a time. Your score at the end is based on the size of your parade, and Boss Battles are the same as before.

Initially Play Hard mode seems to have a lot of depth, but it feels constrained and almost unnecessarily detailed. Each dancing group has a value, and you can’t exceed a predetermined total value for your parade. So you’re limited to who you can swap in and out. Also most of the different leaders are locked behind an in-game experience barrier that you accumulate through playing the mode. More often than not I’d simply stick with the recommended set-up at the start. I found I‘d get through no problems, and changing things around seemed like more hassle than was necessary. What was important was the shuffling around during a parade, which I was fully in control of.

The gameplay in this mode is definitely fast-paced. You’ll be reacting to crowds either side of you as well as looking out for those pesky haters. There are also special items on the ground to pick up and boost your parade further. It means you’ll constantly be selecting different dancers and inputting commands to the music to muster more people. Gain a large following, and the thrust of the music kicks giving you a sense of pride (pun intended). You’ll keep pushing to try and increase the parading army at your back. It never quite manages to replicate the feeling of nailing a long combination of notes in the vanilla rhythm part of the game, but certainly does have its moments. It’s fair to say Pride Run is a little in your face. It’s proud of the LGBTQ+ community and giving it the showcase it feels it deserves. And by and large, it does this in a harmless way, with its tongue firmly lodged in its cheek. The loading screen, for example, is a scantily-clad large man jigging to the beat. Furthermore, if you successfully complete the right inputs at the end of a boss battle, you’ll perform a Prideality on your opponent. Yes, really. Hence Donald Trump in drag. It’s not taking itself too seriously, despite dealing head-on with the concepts of being proud of who you are and tackling the hate that comes with it. But this never really overtakes the core gameplay. At its heart, Pride Run is more rhythm game than anything else.

Overall, there’s certainly plenty to like in Pride Run, but it isn’t without its flaws. Trusting your ears and playing the game on the hardest difficulty you can manage will put some issues to bed. But during the times when you can’t hear the rhythm, the game comes undone. And there’s no excuse for that punishing “hold” input decision. The boss battles, though, are enjoyable, putting a nice twist on proceedings. Play Hard mode offers solid extra content for those looking for more after beating all 16 cities in Vanilla mode. When all is said and done, Pride Run is a fun game. It’s not perfect, and won’t be held as a rhythm game benchmark. But when you’re in the moment, feeling the beat, it ticks the boxes. Writing about it now, makes me want to go back for one more song, and that can only be a good sign.

Pride Run isn't perfect but offers solid rhythmic entertainment. It has some new ideas, and once you've adjusted to it, there's plenty of fun to be had.

Get 20% off at Green Man Gaming with our Exclusive Code