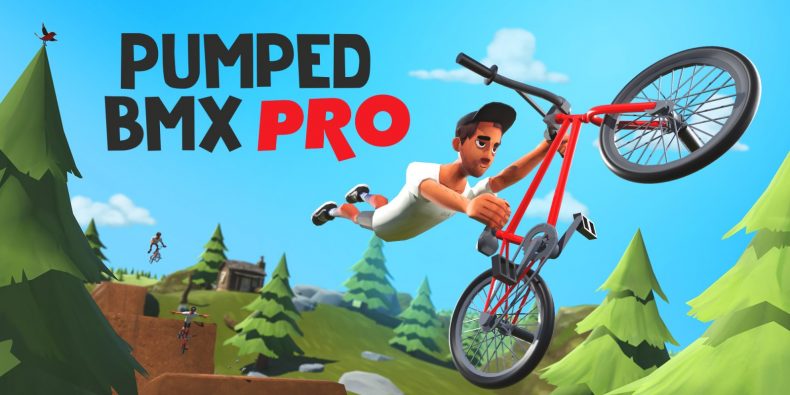 Pumped BMX Pro is the latest bike trick chaining creation to be published by Curve Digital and developed by Yeah Us! And Warped Digital Entertainment.

Pumped BMX Pro plays a bit like Trials but at the speed you’d expect from a BMX instead of a motorbike, but with the addition of three tiers worth of tricks, each more impressive than the last. With a total of 6 worlds, each having 10 levels and 12 challenges per level, there’s plenty to keep you going if you feel like aiming for clearing all 720 challenges.

There are also plenty of BMXers, based off real life BMX riders, to choose from, a total of 14 of them, each with their own specific bike. You also have the option to customise your own bike once the option is unlocked, but all that it does is change the colour of each bike part. Choosing a specific BMXer and bike doesn’t add anything, to be honest, as neither has an advantage over the other. Pumped BMX Pro isn’t a bad game but there are a couple of things throughout that really put me off and hampered my enjoyment. The first thing was the precision each jump needs. To move on you need hold down the acceleration button but let go just before you launch off the ramp, and if you do this too early or too late chances are you won’t make the next jump.

The same thing can happen on the way down to the next ramp. When in the air you’ll need to hold down the acceleration and hit the ramp at the exact right spot in order to gain enough momentum to launch high enough to make the next ramp.

The difficulty of getting used to the precision of launching and landing off ramps is quite high, for me it was anyway. All this did for me was lead to some frustration and me wondering how I was going to be able to do any sort of tricks when I was spending most of my time trying to perfect the jumps. This also lead to having to restart a lot of levels. Luckily for me this isn’t tracked anywhere so I don’t need to look at the shame. My major problem was when I did eventually get the hang of the jumps for a level and got through the challenges, instead of having a feeling of some sort of accomplishment at getting through them I mostly just felt relieved as the frustration overtook any sort of enjoyment. As I’ve said previously, Pumped BMX Pro isn’t a bad game but it takes a lot of practice to properly get going and there are other similar games out there that are a lot less punishing.

The tricks in Pumped BMX Pro are really good once you get the hang of it though. Each direction on the right analogue stick has a different trick and with three tiers that’s a total of 24 tricks to try and master. Add that to the spin, opposite spin, forward and back flip and there’s plenty of tricks to try and chain together to go for the highest score possible.

I think there are plenty of people who will enjoy Pumped BMX Pro and the level of challenge it has to offer, but for me the precision required to make some of the jumps just put me off a little and stopped me from enjoying what I feel could be an extremely fun game.

Pumped BMX Pro is a decent game with loads of tricks to keep you occupied but the precision of the jumps and the steep learning curve can be quite off putting.