Sakuna: Of Rice and Ruin review 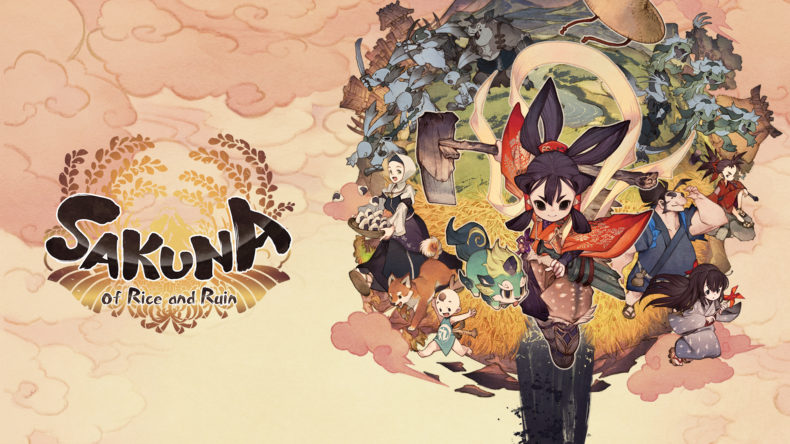 I’ve never been someone who’s gotten hugely invested in farming games. I can see the appeal, a relaxing rural escape where your only worry is if you’ll grow enough carrots to afford a new cow, but spending hours wandering around a field and watering squares of grass has never really held my interest. There are exceptions to my ambivalence to the genre, with games in the Rune Factory series providing enough combat gameplay hooks to entice me to whip my hoe out. Sakuna: Of Rice and Ruin has a similar focus on fighting and farming, but if you want to harvest a glorious array of fruit and veg this self-proclaimed Rice Simulator may not be for you.

You embark on this grainy adventure as Sakuna, a bratty child goddess with no interest in anything but her own indulgence. After a ragtag group of humans cause some fire-based havoc in the Lofty Realm of the gods, Sakuna is sentenced to live with them on the Isle of Demons and clear it out before returned to her pampered life. You’ll get to know your odd alliance much better as you fight and farm your way through the game.

There is no doubt in my mind that Sakuna has the most in-depth rice farming in video games. Throughout your time of the Isle of Demons, you are given one small square of land and must learn the optimum way to grow and harvest the best quality of grain. You’ll start the season tilling the field, then move onto planting, weeding, filling the field with the appropriate level of water, and eventually by autumn harvesting the crop. 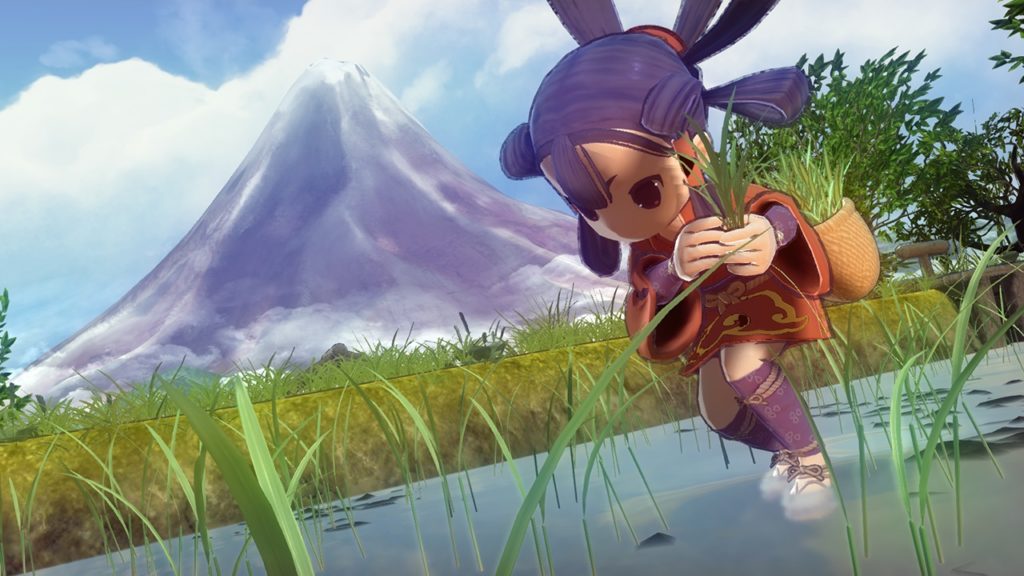 Every single step of your rice cultivation experience is packed full of important requirements to yield the best quality crops. You are told (via your allies and farming scrolls you collect) the best way to improve the quality of your fluffy white food in each step as you progress, so although you won’t have an impressive first harvest you’ll slowly gather information for the next season. The tiny details make all the difference in growing quality rice; each seed must be planted an exact distance apart, the ideal water level changes based on season, and the harvest better have dried long enough before cold sets in.

Sakuna does farming differently to other games. It’s intricate, it’s repetitive, and it’s dull, but the game knows this and revels in it. You’ll learn songs that farmhands sing so they can’t use their mouth to complain as they work, you’ll hear Sakuna moan about a harvest yielding worse rice than expected, but this simple lifestyle is romanticised as a pure and honest way to live your life. Of Rice and Ruin has made me love rice, and I can no longer eat a curry without wondering about the methods used to bring this under appreciated food to my plate.

You don’t grow rice for fortune or favour in Sakuna: Of Rice and Ruin, you do it because it’s the only way to improve Sakuna’s stats. Each harvest essentially levels up our unlikely heroine, based on how well you’ve tended your humble patch of soil. This generally works very well, and every time there’s a roadblock in exploring the island you know that the next harvest will give you the boost you need to batter a boss. 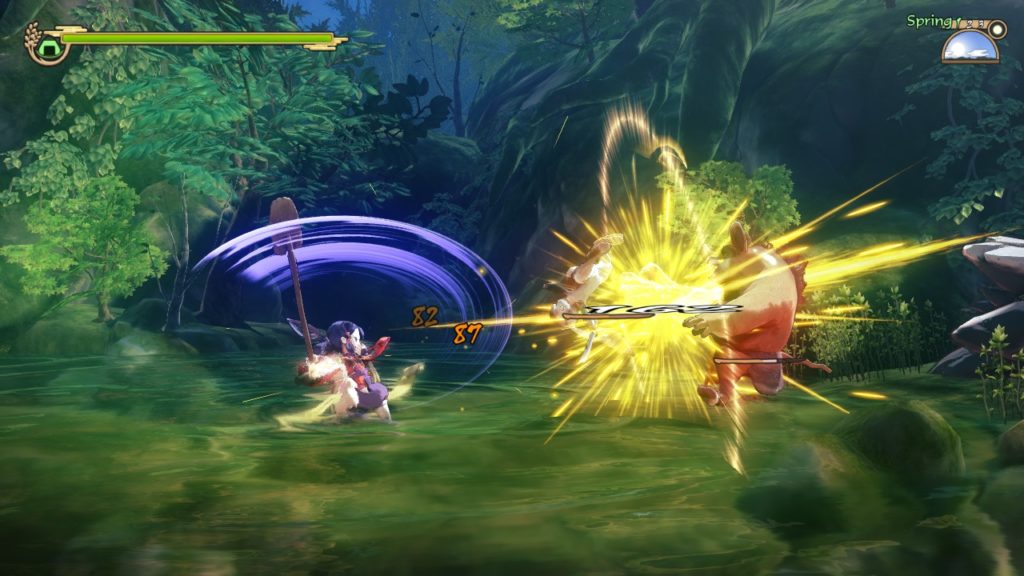 Once you’ve done your daily chores, you’re free to explore the island. Each area is a small 2d environment with a few tasks to accomplish to increase your explore level. The more explore points you collect, the more locations you can access on the world map, so if you’re told to kill 20 rabbits or find a hidden chest it’s in your best interest to oblige.

Sakuna has light and heavy attacks to combine against demons, as well as special abilities that unlock after you perform enough farmwork. There’s an emphasis on launching enemies into each other, causing massive damage as boars, bunnies and bats collide into each other.

As well as battering baddies with farm equipment, Sakuna can also harness the power of her Divine Raiment. This superpowered scarf is used as a grappling hook, essentially turning this goddess into a pint-sized Spider Man. You can latch onto an enemy and swing over to their opposite side to avoid damage, or pull them off balance to begin the living game of pinball again. Using special attacks and grappling abilities in tandem turns combat into a fluid dance of combos, and is really satisfying. You’ll also be using the Raiment to navigate environments, and might even find a hidden mining spot or scroll. 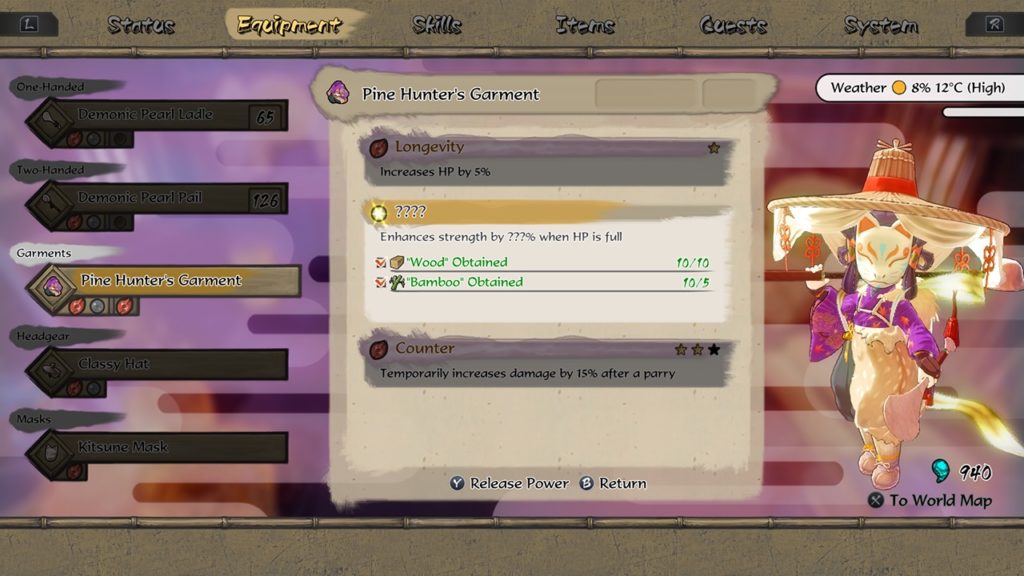 One of the main reasons to go adventuring is to gather materials. Food, crafting incredients and equipment are scattered about the lands if you know where to look, so any shiny spot should be investigated and looted. Anything you don’t use or that goes mouldy can also be used as the base for fertiliser, giving new life and more stats.

Cooking is an important part of Sakuna, and every evening you sit around the dinner table as an odd family and scoff together. These meals not only provide some delightful character moments, but also give you temporary stat boosts for the next day, and regenerating health for as long as your belly is full.

You’ll need all the stat bonuses you can get when you arrive at one of the game’s Boss fights. These huge monsters are capable of dealing massive damage, while their own health is lowered incredibly slowly. You’ll need to dodge constantly using your Raiment, while using any smaller mobs as projectiles. It’ll often take an extra harvest and a good meal to make a boss beatable, and to be honest I do think the difficulty spike at each of them is too severe.

The fact that Sakuna: Of Rice and Ruin was made by a two man development team is frankly astounding. Sakuna blends farming and combat to create a truly memorable experience, with the most in depth rice cultivation you’ll ever experience in a video game. If you can cope with some difficulty spikes and the grind of farm chores, this grainy adventure is well worth investing your time in.

Grappling scarf is great fun to use

Sakuna: Of Rice and Ruin combines complex rice farming and grappling hook based combat to create a truly memorable experience.

Stardew Valley is getting a retail release in April