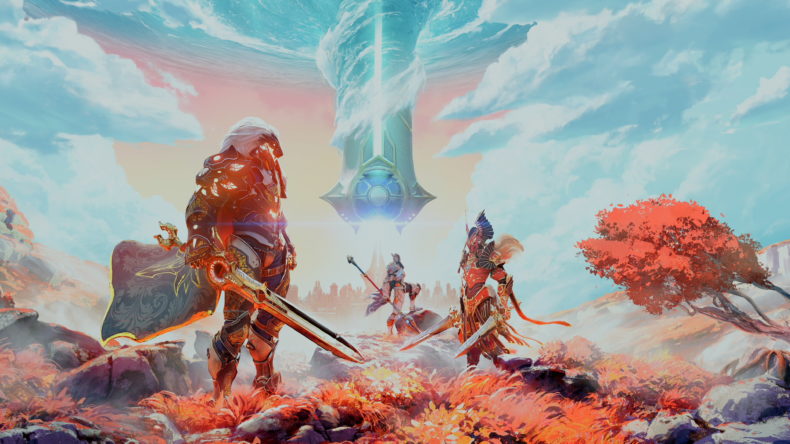 You’ve played Godfall before. That’s a bold statement, perhaps, because you haven’t literally played it before, because it’s not out yet, but you’ve played its key components before elsewhere. But I want to be clear: that’s not a knock against the game. Godfall is a title that feels like people have been ridiculing it for no good reason, and there’s a gaming subset who are going to absolutely love this game, while others will be distracted by just how shiny it is and not realise that suddenly they’re pouring hours into a loot game. Yep, it’s one of those.

Underneath the hood, then, this is a Diablo-alike, or melee-based Destiny 2 game only with less bullshit, you know? That’s not to say there isn’t lore, because there’s loads of that and it’s mostly nonsense, but just in case: two brothers get along really well until they don’t, so they attack one another with their armies. One loses, only he’s down but not out. While the world thinks Orin (the character you play as) is dead, that’s not the case, and it’s Orin’s job to rise up, regain his army and take down his brother Macros, who is trying to become a sort of God who would rule everyone. It’s a fine wrapping for Godfall’s ideas, but honestly, it feels purposefully over the top which matches the gaudy, shimmering art style on offer. 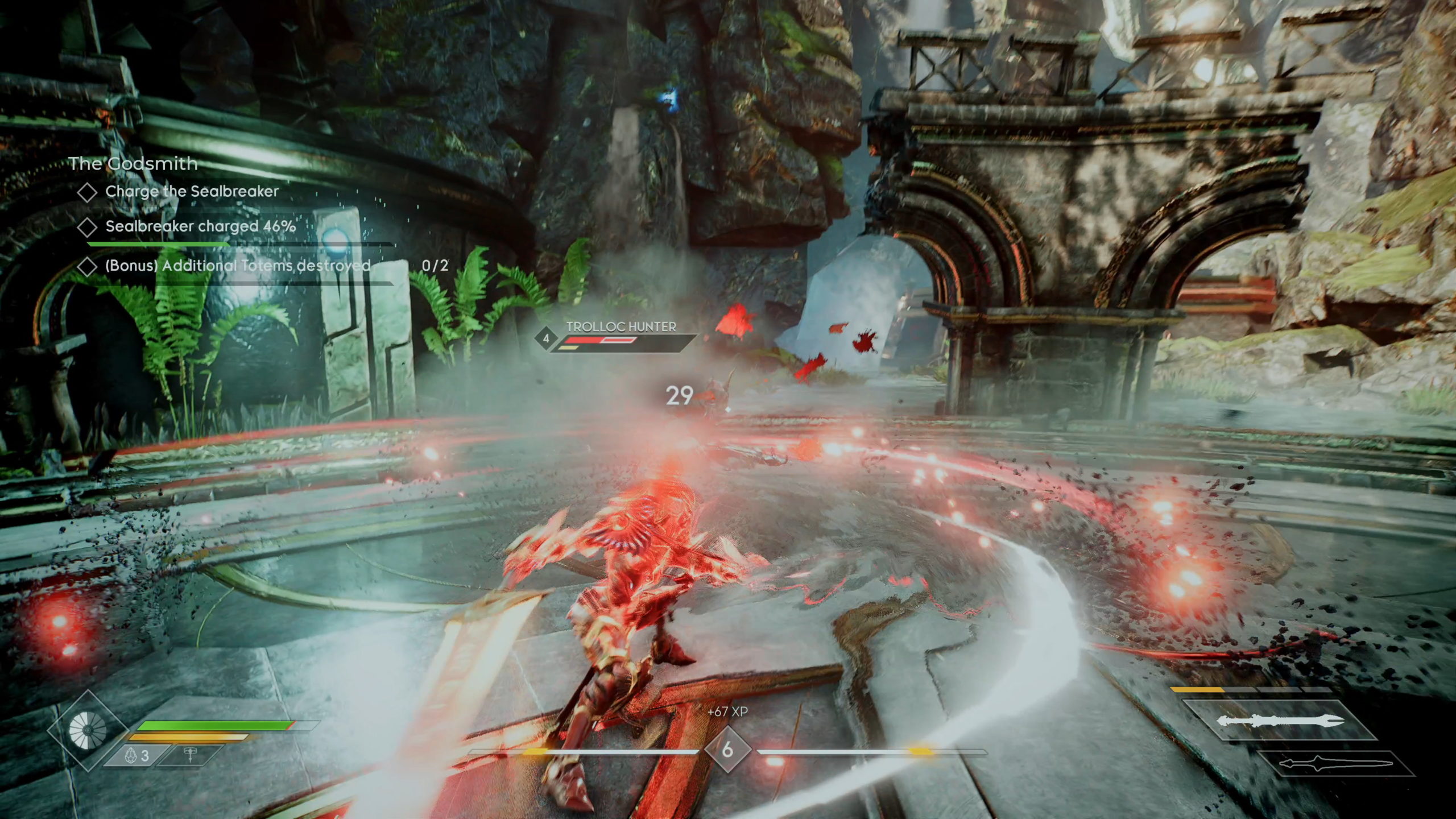 Again, it sounds like I’m down on the game, and I’m not. The art style doesn’t gel with me at all. It eventually does let you see a more naturalistic style, but up front it’s all gold, shiny, and feels like the kind of place Dr Evil would love to live: it’s not my bag. But it does look gorgeous, and it’s executed phenomenally well. I spent all of my time with the game favouring framerate, and not only did I not spot a frame drop, it really does look stunning on a good 4K TV setup. Kudos is earned, then, for showcasing a game that I don’t think could run this well or look this good on the last-gen, in that respect.

The biggest surprise Godfall has to offer is the combat, because this is the closest to God of War I’ve seen a game get since, well, God of War. You can equip two weapons (switchable with Triangle) from Longswords, Greatswords, Dual Blades, Polearms, and Warhammers, and they all feel incredible in your hands. You can set up combos that make use of all manner of additional skills, but crucially, outside of the standard melee combos, the skills all feel utterly badass to use, and flashy to look at. You can make use of a polarity skill to switch weapons at the right time, and there’s an enormous upgradeable skill tree that genuinely does seem to showcase a great amount of depth to the combat. 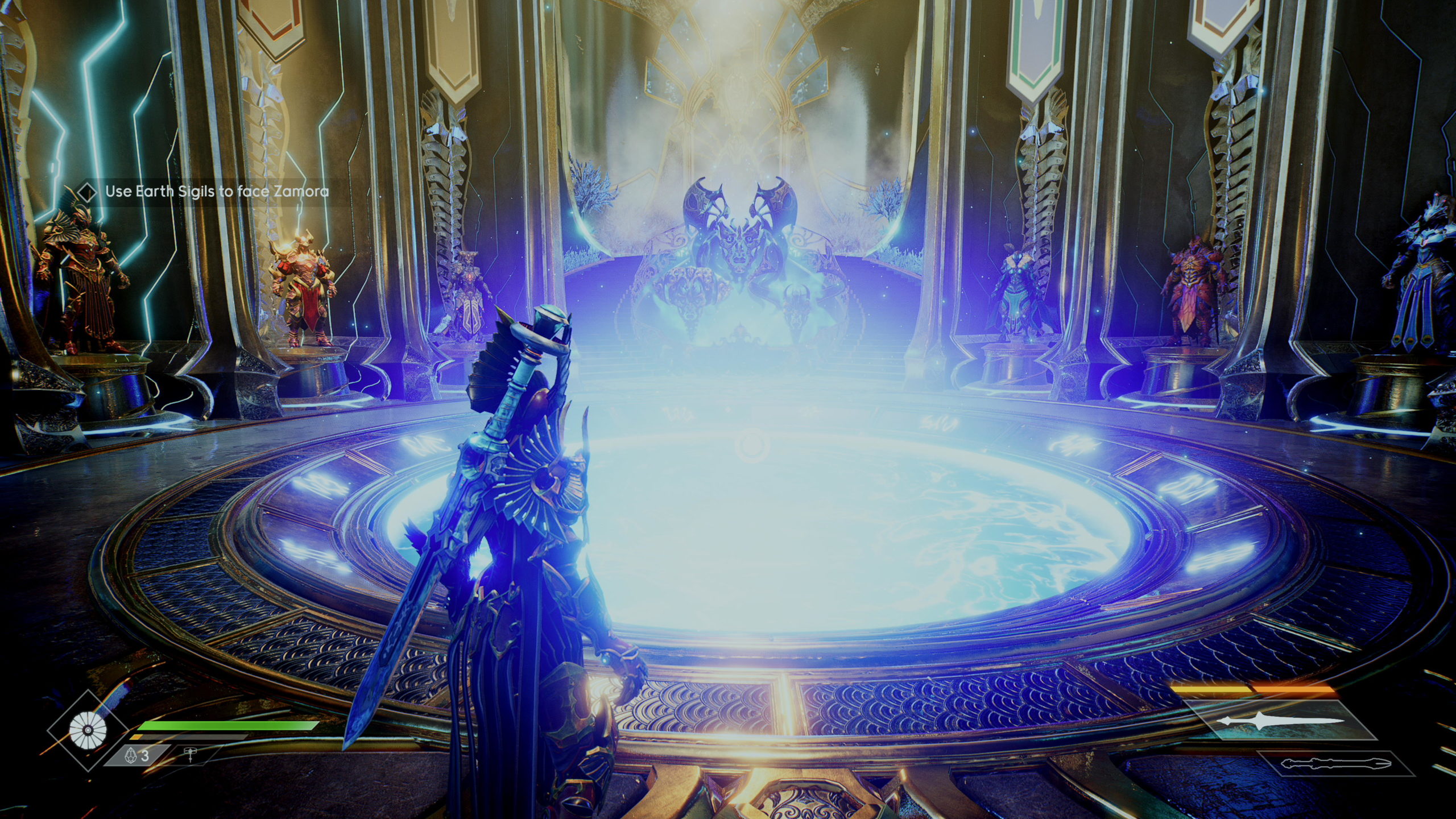 Your shield also offers more than just defence. There’s a shield bash that stuns enemies, allowing you to hit them with a death blow while downed. You can throw the shield, too, and there’s so much going on here that the potential to get lost down a combo rabbit hole is very real. You can target Godfall for not being particularly original, indeed the combat is God of War by way of the Souls-series, even offering the ability to upgrade or enchant your weapons, but you cannot fault it for offering deep, brilliant feeling combat that gives some of the best feedback to the crunching melee attacks I’ve seen in a while.

Another of the pillars to Godfall is the Valorplates you can craft and wear. Twelve in total, they appear to not only change the physical appearance of Orin, but also change him from male to female depending on the plate you’re wearing. Each of these has a specific trait, making them akin to classes: Phoenix is fire based, there’s an earth one, etc: you get the idea. As you’d expect, everything is incrementally upgradeable and these Valorplates are no exception to that rule – only they use rare augments which must be used sparingly as there’s a power usage. These give more boosts to your attacking capabilities, and yet more customisation. It takes some time to get them working for you, but again, the combo possibilities and use case examples are numerous, and it really does showcase depth of gameplay that’s pretty impressive.

What’s less impressive is how dangerously close Godfall gets to an early grind-state. Of all the games I wouldn’t want to compare it to, Anthem is right up there. Gating progress early on is never wise, and aping a game that did it poorly is even less smart. Very early on Godfall blocks your progress asking you to go and collect a certain amount of things which will unlock your path forward. Now look, it’s nowhere near as egregious as Anthem, and the combat in Godfall is so far superior that it’s not going to bother most people (even though it too often drops into a wave-based enemy encounter), but I was a little surprised to see a naturally flowing game halt me in this way and force me to go and spend time in previous areas to unlock trinkets. It does just enough to not fall into too heavy a-grind, but that’s going to be something that’s very much player-dependent. Some won’t even notice, but there is a lot of repetition involved, abated by how good the combat is.

Godfall offers plenty of boss encounters, though, which are always a pleasure. Even on the side-missions when you’re grinding for items there can be a named-enemy encounter, and they’re wild, full of colour, and just exceptional fun. It’s easy to forget how well designed and visually stylistic Godfall is during these battles, but they are explosive situations with particles flying everywhere, enemies being summoned, all while you try to focus on the big bad in the centre of the arena. Truly, the boss battles feel epic.

Which leaves Godfall in a strange spot. It has brilliant combat and stunning visuals, but under the hood it’s still “one of those” games. It doesn’t thrust multiplayer upon you, saving that for the end-game, and it feels like a solo adventure for large parts of the game. It won’t be for everyone, yet I found myself dying to go back every time I stopped. The combat is just so good, and the draw of smashing enemies with such thunderous force was always compelling. Yes, under it all it’s a grind-based loot game, but it’s a very good one and makes so few of the missteps its contemporaries mate. Out of the box this game doesn’t need major loot overhauls, or huge redesigns: it’s not ashamed of what it is, and it does what it intends very well, and because of all of that, it’s one of the biggest surprises of the year.

Godfall is a massive surprise. It borrows combat from God of War and has enough loot to make Diablo blush. It may look garish but it's well designed and has that "one more go" factor.