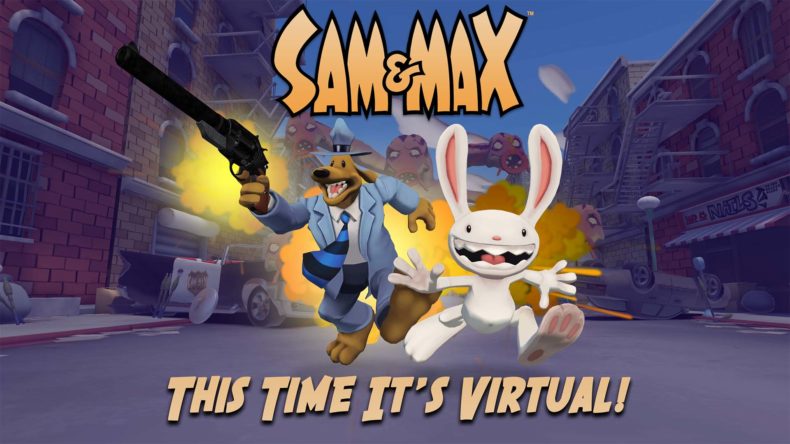 Having inhabited the worlds of point and click adventuring, comic books and animated television shows, Steve Purcell’s irreverent comedy oddballs Sam & Max have been a leftfield pop culture touchstone for over thirty years. Moving quite radically away from their usual videogame style, 2021’s Oculus title This Time It’s Virtual has now been served up for the PSVR. Whilst it undoubtedly captures the aesthetics and humour of the SCUMM classics, this is something of a misfiring, mixed bag that begins brightly but fizzles out disappointingly.

For the uninitiated, Sam & Max are a pair of anthropomorphic animal pals who form a chaotic P.I firm called the Freeland Police. Sam is a lofty bipedal dog who dresses like a gumshoe dick complete with an always-loosened tie and fedora hat. The more conventional detective of the two, Sam is intuitive and clever, packs a comically enormous revolver, but also retains some loveable doggy characteristics beneath the hard-boiled persona. Max is a chalk-white leporine whirling dervish, who is the crazed, near-psychotic opposite to his Irish Wolfhound pal. Rather than try and solve mysteries with logic and nous, he has a maniacal violent streak and a disregard for his own safety. As the cliché goes: together, they fight crime. 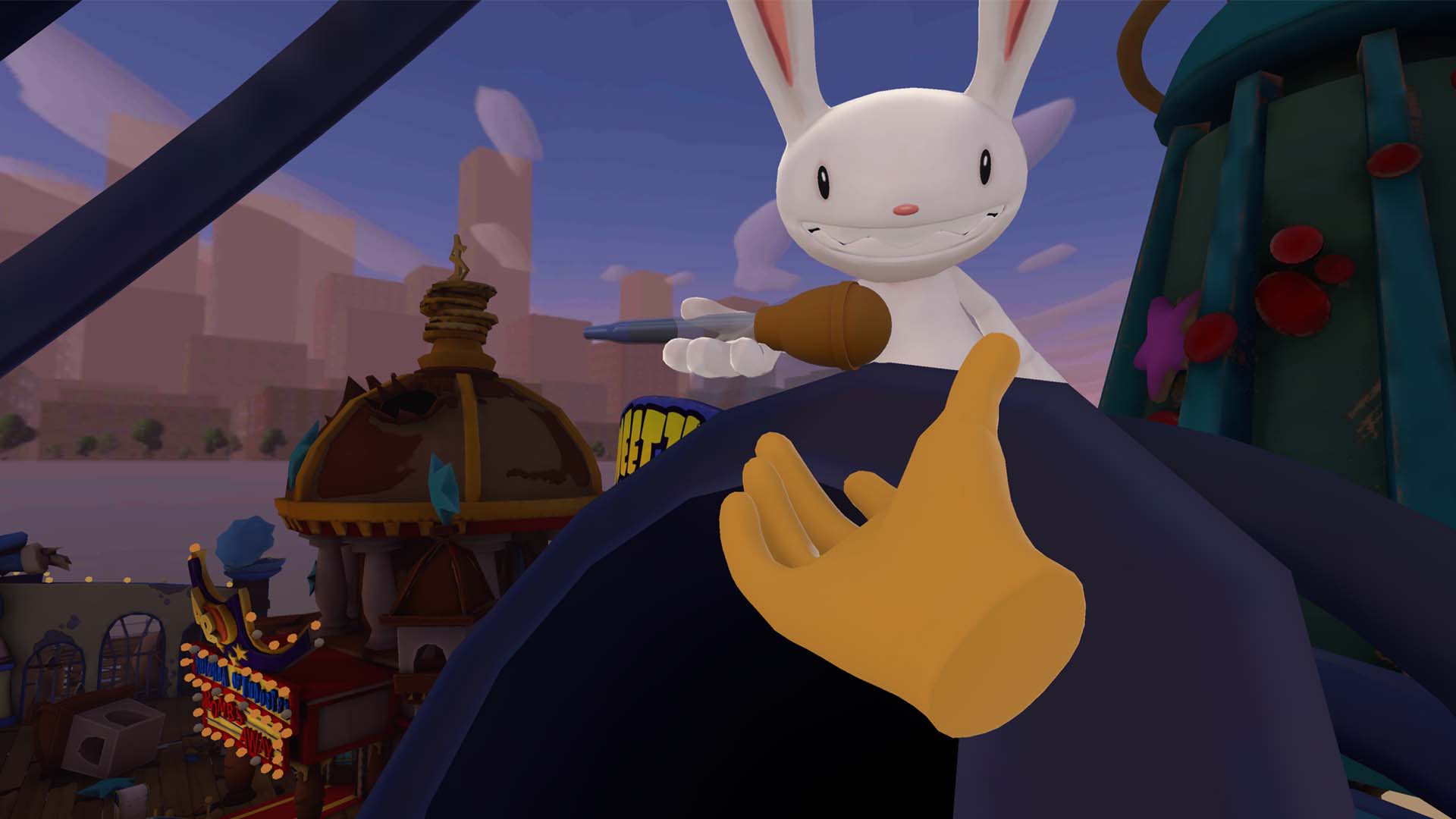 This virtual adventure starts very promisingly, but it soon becomes clear that it is far from the labyrinthine interactive stories we are used to from the due. You are thrown into the action as an ally of the Freelance Police as they are taking on an enormous kaiju style monster in a pitched battle. Once you take care of that situation, you are taken back to HQ and given the opportunity to shoot some cockroaches (a Purcell staple), and channel your inner Gerwyn Price by throwing some darts.

The gameplay loop is established at this point – you are given a series of minigame trials, that are score-graded by Sam & Max – to prove your mettle as a member of their crew. They follow the usual VR tropes: throwing stuff, shooting galleries, parkour-y traversal, sportsy stuff. The trouble is that none of them are particularly interesting, and there are a lot of glitchy, annoying cock ups. Aiming can be off, picking items up can be hit and miss. 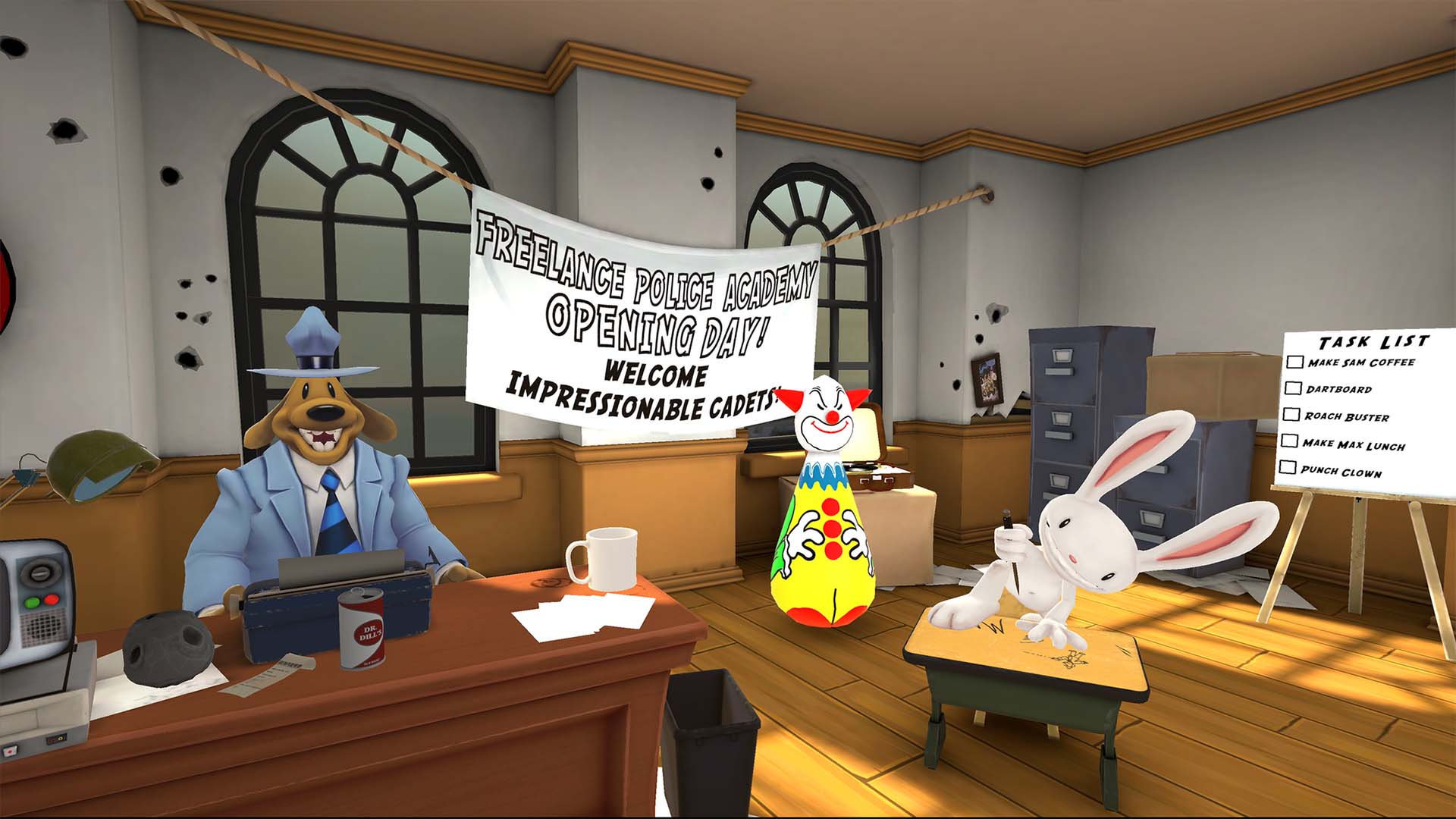 There are “cases” which follow the minigames, and serve as boss battles of sorts. These take place in more interesting environs – with a supermarket showdown a particular highlight. But there are still issues with manipulating items, and some strange collision detection going on. Sometimes you are given more traditional Sam & Max fare in the form of puzzles – a welcome break from what often feels like a constant grind of shooting galleries. But even these can sometimes have some really odd, cryptic solutions. Thankfully, you can get some verbal tips from the titular heroes. And quite frankly, it is the charm and humour of the duo that just about drags this one over the line.

The voice acting for the main duo is exceptional thanks to cracking turns from voice acting stalwarts David Nowlin and Dave Boat. They are assisted by a genuinely hilarious script that is as good as anything we have ever seen from the series. Fans of the franchise will lap it up, and newbies – like my young son – will find it crease-inducing, warm and utterly charming. Your tolerance of the somewhat dull and unimaginative gameplay will have to be the tradeoff for the best This Time It’s Virtual has to offer. Frankly I would prefer to see the same level of imagination and ingenuity in the razor sharp writing translated to another point and click classic.

Frankly I would prefer to see the same level of imagination and ingenuity in the razor sharp writing translated to another point and click classic.

You may also like
digeratiSam & Max: This Time It's VirtualReviews