previous
What Lies in the Multiverse review
random
next
Sam & Max: This Time it's Virtual review
0 likes 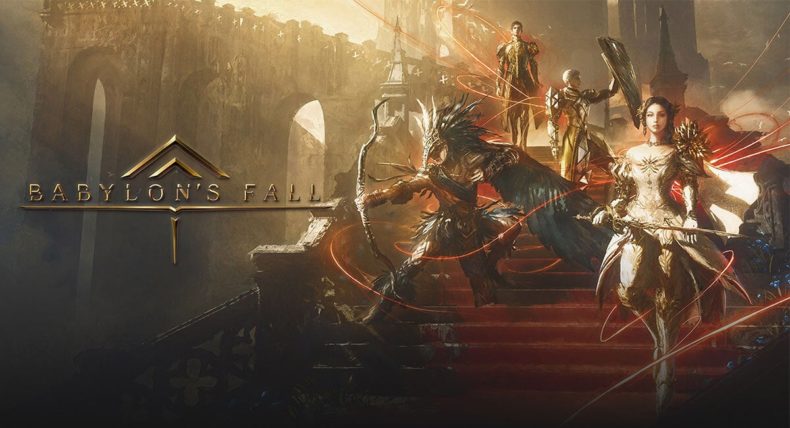 Two theories come to mind when first playing Babylon’s Fall. The first is that it might have been developed by a roomful of robots controlled by some kind of prototype AI. The second, and only slightly less likely theory is that it was developed by some application of the Infinite Monkey Theorem. It’s almost exactly the kind of game you’d get from leafing through a shopping site of standard gaming cliches and clicking Buy Now on the first option in every category.

Designed to be an endless melee grindathon something akin to Godfall, Babylon’s Fall (no relation) sees your character arrive in a city by the sea, which stands in the shadow of the Ziggurat. The Ziggurat is a gargantuan tower powered by a mysterious blue sun. It has infected the people below with a plague called the Blue Death. The Gallu then occasionally descend from the Zigurrat to murder some people. The folk of the city have been at war with them ever since.

Rather than just build a wall or, I don’t know, move, the people of the city instead recruit Sentinels. Prospective Sentinels have a device called a Gideon Coffin strapped to their backs. If they survive the process, they earn the right to go into the Ziggurat. The plan is to reach the top, where the Gideon Coffin will automatically deactivate the Blue Sun, and rainbows and butterflies will shoot out. For some reason only three can go in at a time, all the best armour is in there, and they can come out whenever. If it all sounds like garbled, contrived nonsense, that’s because it is. This is Platinum Games operating on autopilot. 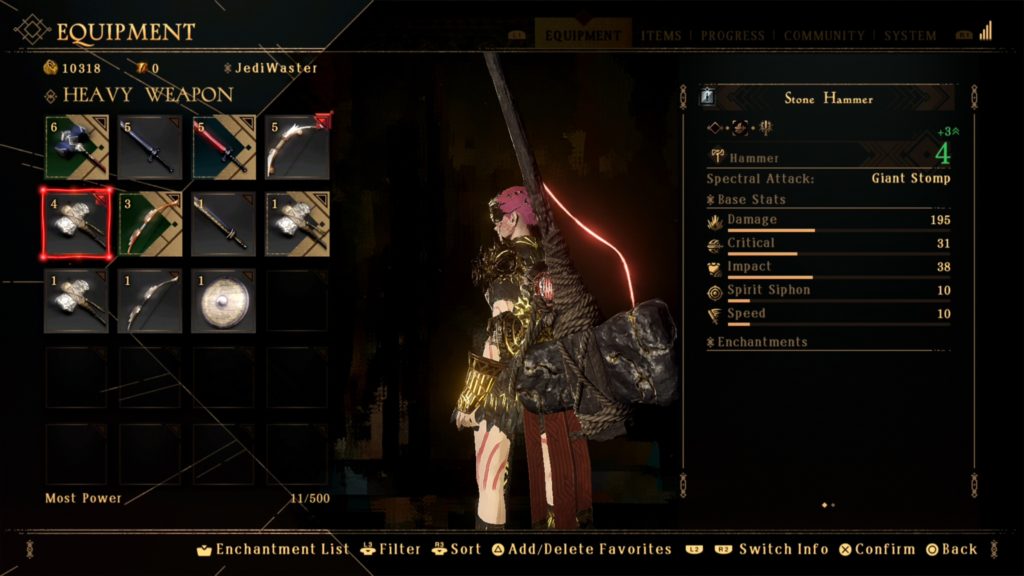 It’s no exaggeration when I say that this feels like a zero effort title from the developer that brought us Bayonetta and Vanquish and even The Wonderful 101. It’s not that the core loop is particularly bad in itself. But this is a grinding game where the onus is on repetition for the sake of it. On paper, it’s no different to any modern MMO or looter-slasher. But the execution here is so achingly generic that it’s not even amusing.

For example, the main innovation is that your Gideon Coffin carries your four weapons. It summons one to each hand by pressing either Square or Triangle, and activates special moves with the other two when you hit the triggers. The energy required for this built up by performing perfectly timed dodges. Initially, it feels pretty good; Platinum, after all, knows their melee combat.

However, it soon becomes tedious when there’s no deviation on combos and no way to satisfyingly chain attacks with different weapons. It’s workaday combat at best from a developer that has shown a propensity to wow us in the past. I spent half an hour kiting one boss enemy with my flimsy bow because it enraged every ten seconds and I couldn’t get near it. Also, the weapons themselves don’t help when they get in the way and obscure the action because they float on weird ghostly tendrils. 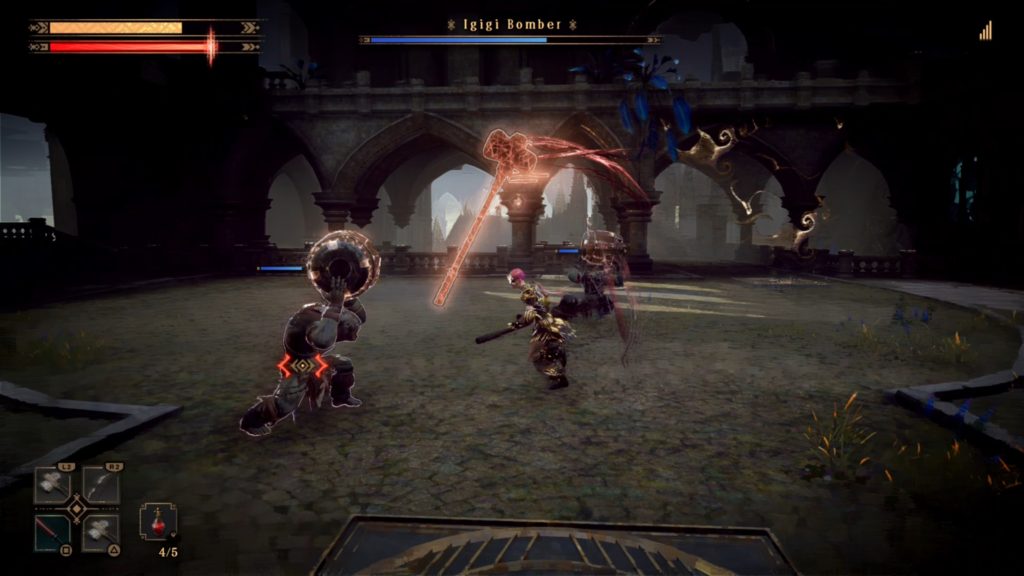 It soon becomes quite clear that Babylon’s Fall exists to sell you things. The only initially active shop in the hub is the cash shop, and the Battle Pass is front and centre. But there’s nothing to hang it all on. The story is almost completely nonsensical, with voices in your ear delivering exposition whilst on solo missions. This is then supplemented by the voices of characters who are apparently there with you. They pop out in cutscenes between missions and then vanish again. But even if you play multiplayer you’re all in control of your own custom avatars. It feels like Babylon’s Fall was once envisioned as something much grander. But then Platinum Games started trimming bits off it like a bonsai tree.

If this were free to play some of it could be forgiven. Even if this was a low-budget indie released quietly into Steam’s early access I’d give it the benefit of the doubt. But it’s not. This is from the combined houses of one of the biggest developers and biggest publishers in the business. The litany of AAA hits created by both is staggering, and yet this game somehow exists.

It also looks awful. I feel bad playing it on the PS5. Maybe it began as a Switch exclusive to follow Astral Chain, but even then it’s decidedly subpar. There’s a sense the artists were going for an “oil painting aesthetic”, which here means forgoing any kind of texture work developed in the last 20 years of game creation and putting a weird filter over the top that looks like something has dried on the screen. Character models are ugly and angular, and wouldn’t look out of place on the PS2. This is not an exaggeration. 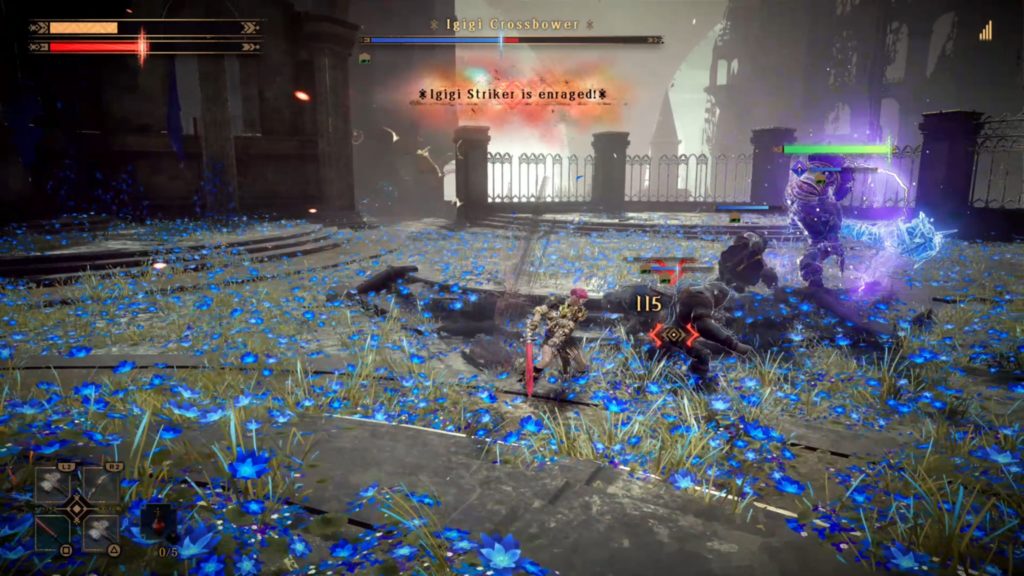 If I was being charitable I’d say that, as a looter, Babylon’s Fall certainly scratches an itch. It might scratch it with a rusty trowel, but if all you want is coloured loot to turn into gear at the end of a very bland sequence of monster rooms it’s got you covered. Having such a simple core loop is not a bad thing in itself. Nor is having a blatheringly anachronistic story where medieval knights use candles for light while strapping Guyver devices to peasants. It’s just that there’s so little here to recommend it over other titles. Even Godfall, which was unfairly derided by many, has more depth, polish and colour than this.

If Babylon’s Fall were free to play I’d say give it a go, as it might give you a little enjoyment if all you want is a button masher that ticks your loot boxes, but ultimately I can’t recommend it over any other game released recently.

That Babylon's Fall comes from Platinum Games is perhaps the biggest surprise here. A banal, uninspired hack 'n' slasher with no imagination or personality.