previous
Children of Morta Switch Review | Switch Re:port
random
next
Doctor Who: The Edge of Time review
1 like 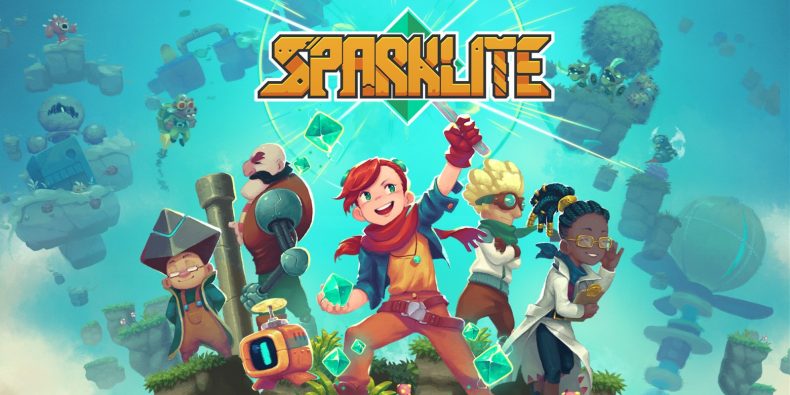 Roguelike games can be a pretty divisive genre. Some players enjoy each run being entirely self contained, with each death bringing nothing but knowledge to carry forward into future attempts. Others appreciate being able to retain progress between each attempt – slowly building your character’s power until finally, that elusive victory run is yours. Sparklite nestles itself firmly in the latter category, allowing you to appreciate its charming world knowing there’s never a chance that all will be lost.

Our hero Ada quickly finds herself stranded in the strange land of Geodia, after her airship is brought down by a freak storm. Losing her robotic partner in the crash, Ada grabs her trusty wrench multi-tool aiming to save her friend and (eventually) discovers there are even more important Crystal based matters to attend to.
This journey takes the form of a classic top down Zelda style game, with a charming steampunk twist. Swords are replaced with a wrench and a hammer, and bombs with grenades propelled via hot air balloons. As you explore new areas of Geodia, you unlock new items to help you access even more of the ever changing world. That is, if you can survive that long. The first “death” comes pretty swiftly, as a huge, seemingly invulnerable mech leaves Ada unconscious. Death may be a bit of an overstatement in Sparklite though – as losing all your health only causes you to faint, and a huge claw follows to pluck you from the dangerous world below. All of your Sparkite (the small gems that serve as currency) is retained, with only a few consumables and side quest items vanishing from your inventory as you are slowly raised to the safety of Refuge.

This floating island is your only safe space in the world of Sparklite. Refuge starts with only a hospital and a console to apply patches to your wrench, but with a bit Sparkite you can build a selection of shops, laboratories, and research stations to help aid you in your adventure.

Patches can be found in a variety of ways. They can be bought from shops in Refuge, found in challenge dungeons on the surface or rewarded for completing side quests. You apply them (in all their shapes and sizes) onto a grid to upgrade your health, attack, and even add helpful icons to your world map every time you drop back into the world. Identical patches can be stacked on top of each other to upgrade them – two quarter heart upgrades into a half heart and so on, saving you precious space on your patch board. It’s in your best interest to keep improving Refuge with the currency you collect. New buildings offer you free consumables to take with you, permanent new weapons, and even research to improve your damage against a specific enemy. With each trip to the surface bringing more Sparkite, it doesn’t take long for you to build a sizable sky base to support you on your journey. It’s a very satisfying loop, which consistently rewards you with even greater power.

It is soon (very elegantly) explained that the reason the world is different on each trip down to Geodia, is due to the huge amounts of earthquakes that take space on the surface. The world is made up of a large selection of pre-made tiles, with the general shape of the map always staying the same – the swamp is always to the south, the desert to west. It means every run feels fresh, but that you never really struggle with finding the area you need to. Coupled with the map upgrades marking more and more places of interest, Sparklite takes away the frustration of exploring a new large world multiple times. You are still rewarded greatly for leaving no stone unturned however, with a selection of side quests awaiting your completion. Most of these involve trying to reunite a young brother and sister, who constantly get separated by the quakes. Find one of them, and they’ll give you both an idea of where the other is and a medallion to show them so they know there sibling is safe. It’s an adorable way of giving you something extra to do alongside farming Sparkite. Even the collectables are charming, small birds called Beats that make “the happiest sound in the world”.
Charming is the perfect word to describe Sparklite. The world of Geodia is utterly beautiful, with a colourful and incredibly detailed pixel art style bringing everything to life. The soundtrack adds to this perfectly, with memorable tunes that wouldn’t feel out of place in a classic Zelda game.

It’s not all sunshine and rainbows for Ada though, with a selection of enemies and huge bosses awaiting her arrival. There’s a nice array of standard enemies, requiring the use of a variety of quick, charged and ranged attacks to dispatch of. Ada can also dash over bottomless pits, and away from attacks to avoid losing precious health.

The bosses especially are very well designed and always a good challenge. Learning the attack patterns of each of these giant mechanised enemies is crucial if you want to come out on top. Beating each of the main antagonist’s 4 bosses leaves them permanently dead, and leaves you with a new skills to explore a new area of the map.
The gradual increase in difficulty in each new area you are able to access is incredibly smooth. Even though death can come quickly it never feels punishing, as you always gather enough Sparkite to make your trip to the surface feel worthwhile. The only time the game felt frustrating was the final area. The snowy mountains to the north bring you head to head with a variety of ice enemies, which often have the ability to freeze you in place and stunlock you into submission. It’s an irritating end to a very relaxing game. Regrettably; Sparklite is not a game without issues, and they mostly come in the form of technical issues. My longest supply run whilst playing the game was cut short by a hard crash, thousands of Sparkite and almost an hour of progress was entirely lost. Alongside this – I was trapped by respawning vines in a cave multiple times, faced glitched unkillable enemies, and noticed considerable slowdown when facing multiple projectile firing enemies on one screen. While none of these issues alone would have been a huge issue, the number of technical problems did detract from my enjoyment somewhat.

Sparklite is, for the majority of the game, an incredibly entertaining adventure through a world dripping with a level of charm usually reserved for first party Nintendo games. The experience is marred by a few technical issues and annoying enemies, but it isn’t enough to offset the enthralling loop of gathering Sparkite and making Ada more powerful. The Roguelike genre is rarely able to strike such a perfect balance between fresh random gameplay and a consistent curated adventure as it does in this game.

A charming Zelda-esque Roguelike with a compelling assortment of permanent upgrades. A few technical issues do detract from the experience, but the beautiful world of Sparklite is well worth exploring.