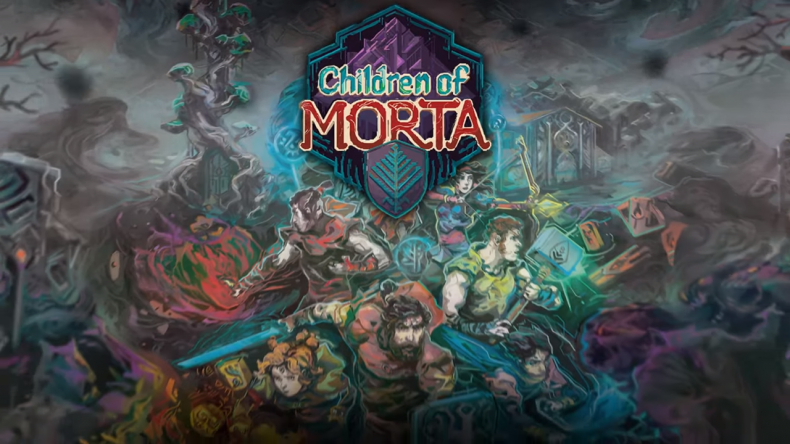 Switch Re:port covers the Nintendo Switch port/version of a game newly released on the platform. Originally released in September 2019 and scored 7/10 on PC.

It’s not often I’m surprised by a game. Not necessarily in terms of quality, but rather in terms of content. It’s not often that I’m certain I know what a game is going to be only to have my expectations subverted upon playing it for the first time. But I went into Children of Morta expecting a very specific experience, a procedural dungeon crawler with some hacking and slashing, a throwaway story, a lot of stuff and no substance. Turns out I was very wrong.

Yes, Children of Morta is a procedural dungeon crawler, but the unique way it weaves its adventuring together with the story of its family of protagonists is something that truly resonates with me. Maybe it’s because I’m from a big family, but the plight of the Bergsons struck a chord with me and I was unable to put down my Switch. The Bergsons are an adventuring family; father John, daughter Linda, and eldest son Mark risk their lives on a daily basis venturing into the caverns and dungeons below Morta, the legendary peak upon which sits the Bergsons family home. Their souls bound by ancient magic presided over by the Grandmother, Margaret, each death returns the Bergsons to their home to begin anew.

They have an individual skill tree to level that includes passive buffs and special attacks, often area of effect or aura spells, and there’s also a family-wide skill tree that you put points into when you return to it between forays into the darkness. The gameplay itself, while smooth and satisfying, isn’t always as precise as I’d like though, if I’m honest. And I find the difficulty to be just a little artificial in that health refills drop at random, and sometimes they fall regularly, while at other times I’ll go through two or three failed runs without seeing a single potion drop. I’m also not in love with some of the bosses. An early spider boss, for example, felt hard to learn and a little too random in its patterns, but I’ll admit switching from John to Linda helped a great deal.

A death requires a fresh start from the beginning of your current dungeon, and it can take upwards of 15 minutes to reach and kill a boss so you can advance. With no checkpoint system serial bad runs can become a little frustrating and repetitive, but the aesthetics and the atmosphere more than compensate. It’s also possible to play it in local co-op, which not only makes staying alive a little easier but increases the fun, too. The screen can get a little busy when you’re both spamming special abilities every time they cooldown, but it looks beautiful and rarely causes any kind of slowdown.

The story is told in between delves into the dungeon, as you’ll be shown slices of family life in the Bergson house complete with familial dramas and dilemmas, such as Kevin running away to stake his claim as a hero. It’s full of great moments that remind you that the Bergsons aren’t just a group of warriors fighting evil, they’re a family with all the trials and tribulations thereof.

Sadly, there are no Switch-specific features in this version, meaning that if you own the game already on another system there’s nothing to get your attention here except the ability to play it handheld which, I’ll be honest, looks much better but doesn’t perform quite as well. That said, aside from my first few hours with it I’ve played it almost exclusively handheld because it just feels more natural.

Fans of dungeon crawlers will find an awful lot to enjoy here, despite the uneven difficulty, and the family dynamic adds a surprising depth to the storytelling and a hook to ensure you keep plunging back into the depths of the mountain to finally bring a bit of peace to the Bergson household.

Difficulty is uneven
No new features