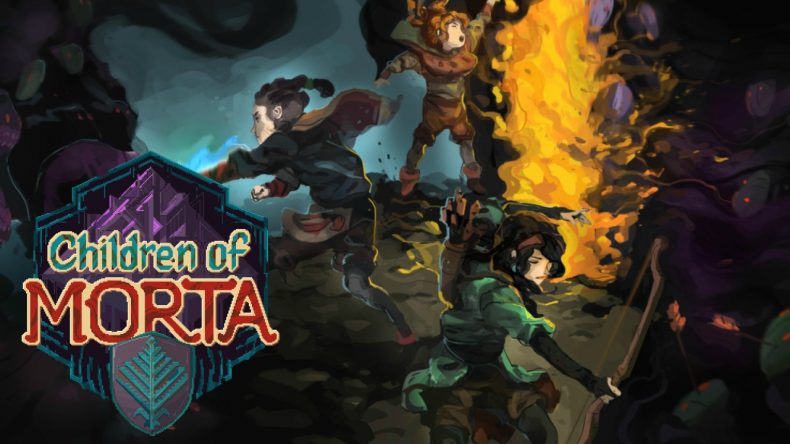 The Bergson family has guarded Mount Morta for generations, but something is wrong. The family’s old seer cannot speak to the god of the mountain and a sickness has begun to corrupt the surrounding lands. Animals are dying, replaced by monstrous creatures, and an inky darkness is covering the forests and neighbouring areas. The Bergsons must discover the source of the corruption and bring peace back to their mountain.

This is largely done through delving into dungeons and cutting a swathe through the evil that infests the mountain’s regions. Children of Morta is somewhere between Diablo and Hammerwatch, as you run around each area, battling and dodging your way through the various monsters and critters that block your way. The Bergson family members don’t die however, instead being snatched from the jaws of death by a magical force, returning them to their family home at the base of the mountain. Here, you can regroup. You can spend gathered gold (known as Morv) to improve your weapons and armour at the family blacksmith, before heading back into danger. This will change the layout of a dungeon, however. The corruption is always changing the landscape, which means that no two dungeon delves will ever be the same. It’s also the reason why Children of Morta can be a fairly repetitive experience, especially in the opening hours of the game. This is because you will find yourself dying and replaying the opening dungeon many times, learning how each of the first two characters play and how the game’s mechanics work. All the while, much like Heroes of Hammerwatch, gathering gold that will help you to improve the family’s chances of success in the next run.

Between runs, whether you’re successful or not, the story will move forward in some way. This is one of the game’s best features, as the deep, soothing tones of the narrator tells us the story of each family member, or of the world’s history, or how the corruption seeks to take over even the Bergsons’ land. This all plays over a short scene, be it the Bergsons debating at the family table, or introducing the next playable character. This constant storytelling helps to break up the repetition inherent in delving into the depths over and over, as well as creating a bond between the player and the family. The dungeons are where you will spend most of your time in Children of Morta however, and as I said earlier, the first few hours will probably be a struggle. You will choose from the first two available characters, John, the father of the family, and Linda, his daughter and firstborn. John is the typical brute character, dealing damage through large slashes of his sword and using his strength to get in the faces of his enemies. Meanwhile, daughter Linda is a crack shot with a bow and deals damage from afar. She was actually my character of choice for most of my time in the game, holding the right stick to fire shots in all directions while attempting to avoid the clutches of the incoming creatures. After three hours or so, going through the same few areas, the game seemed to take pity on me and introduce a third character: Kevin.

Kevin’s dual daggers are devastating, his attacks increasing in speed and ferocity the more he fights. This led to me destroying the first boss, which thus far had thwarted my every attempt. Yet Kevin was not overpowered, as I discovered when visiting the next area. This is because Children of Morta seems to subtly favour using different characters, so despite my fondness for Linda’s archery skills, I had to experiment from time to time. This was fine with me, because the combat is genuinely quite fun and varied, once you begin levelling your characters and the family. It’s just a shame that many will lose interest within those opening hours, because it really can be a bit of a slog trying to fight past that harsh learning curve. Once you do, you’ll find a fun and rewarding action RPG waiting for you. Okay, so the environments and creature designs are a little dull, but it still keeps you engaged with that age-old “one more go” factor, as you refuse to let that boss beat you again. Do you try another character or just vary your tactics? Do you hope for better drops in the form of the randomised power-ups that litter each dungeon? That last one can really make or break a run, too. On top of the basic attacks that each character has, chests and challenge rooms can yield random power-ups that can provide temporary buffs or even permanent boosts (well, semi-permanent, as they only last until you either finish the current dungeon or die) that add things like a healing sprite or a ranged helper that attacks your enemies. It’s a little like Dead Cells, in that these randomised drops can really have the last word on whether you’re successful or not, in your current run.

There is so much to like about Children of Morta, and it really does grow on you, if you let it. The problem is, its opening hours will beat you down somewhat. Playing and replaying the same dungeon, even with its randomly-generated layouts, can feel dull and monotonous. If you battle through it, however, you’ll find a rewarding action RPG with a lot of heart.

Children of Morta is a rewarding action RPG with a lot of heart, providing you can make it through its repetitive opening hours.