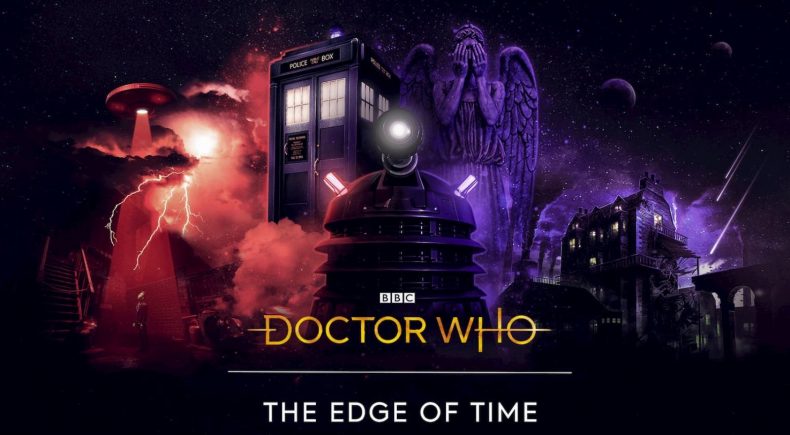 I’ve always wondered what it must be like to be the Doctor. How great would it be to fly around the entirety of time and space, getting to see anything you could ever want to see. Personally, I’d go back to the ninth century and share an ale with the Vikings, although I’d probably only end up seeing a huge axe being swung at my head. It’d be an amazing experience, albeit a terrifying one, especially if I’m face to face with those hideous Weeping Angels. There’s the TARDIS, a Sonic Screwdriver, and some pretty funky clothes, so being the Doctor would have more benefits than not. In Maze Theory’s Doctor Who: The Edge of Time, you don’t exactly get to be the Doctor, but you will fly in the TARDIS, meet some of their biggest enemies, and visit some rather interesting places.

The current Doctor, played tremendously by Jodie Whittaker, is trapped at the far edges of space and time. She manages to get in contact with you whilst you’re in the local launderettes and tells you that things are going to go bad, fast. What follows is a mix of completing arbitrary puzzles across five stages, each with a different setting. Connect wires correctly to open passages, redirecting lasers, and opening safes are just a few of the puzzles you’ll solve, and for the most part are relatively simple. Movement on the other hand is the biggest irritation regardless of how you prefer to play. You can adjust settings so that you can move around freely, or use the teleportation mechanic, but it’s so slow. There’s an option to move faster, but it doesn’t feel like it at all. For a series that often relies on running away from an enemy, you’ll move like a slug in tar. It became increasingly frustrating the more I played. There’s also no way to move back when using the Move controllers, so either switching between 22.5, 45, or 90 degree angles is about the best option you have. There seems to be no particular reason why movement is so restrictive, and constantly moving slowly ruins the immersion and takes all the fun out of some of the game’s finer moments.

Speaking of those finer moments, Doctor Who: The Edge of Time provides some excellent guest service for fans of the show. Watching as the opening credit sequence plays out means you’re moving through the colourful time tunnels whilst listening to the iconic theme music. Subtle references to past doctors are also lovely, and walking around the TARDIS provided a nice touch. The Weeping Angels appear in one of the chapters, and having to deal with them in VR gave me a bloody heart attack. It’s done ever so well, adding a sense of horror I wasn’t expecting to see. Not only that, but the Doctor’s oldest enemy, the Daleks, also play a role in the story, and when you hear them for the first time outside the launderette, you’ll get goosebumps.

A lot of the sections require you to interact with certain objects, but it’s hard to know what can be touched as there’s no notable difference, other than when you move your hand over it and it glows white. When you’re struggling to find what to do next, the voiceover – whether the Doctor or someone else – just won’t shut up talking. It’s off-putting and really frustrating if you think you’re doing what you’re being told only for nothing to happen. An early puzzle set on the TARDIS almost caused me to headbutt the wall because the control panel was so fiddly, with tiny buttons and levers I needed to push that I struggled to interact with. It feels like Maze Theory has played it as safe as possible, trying to focus more on fan service than actually making an intuitive VR game. The puzzles are dull, the movement is painfully slow, and the story is lacking any real bang. Think of the filler episodes where there’s no overarching story progression, and the aliens are unoriginal or just plain ridiculous. It’s by no means a terrible game, though. Some of the locations are pretty, and the atmosphere can be really tense. It’s a shame we don’t actually get to see Jodie Whitaker’s Doctor that often, and that almost all of her dialogue is delivered via audio only.

Doctor Who: The Edge of Time is a plain adventure that doesn’t push the boundaries of virtual reality. It’s more about fan service than it is about anything else, but it does have moments where it shines, particularly when the Weeping Angels pop up. If you’re a big fan of Doctor Who, you’re going to enjoy visiting the TARDIS, bumping into the Daleks, and swinging around the Sonic Screwdriver, but even then the excitement wears off rather quickly.

Movement is horrendous
Puzzles are rather dull
Story is generic

A Doctor Who game set in a virtual world could have been something really special. Unfortunately, the slow movement and generic puzzles don't do much for Maze Theory's game.