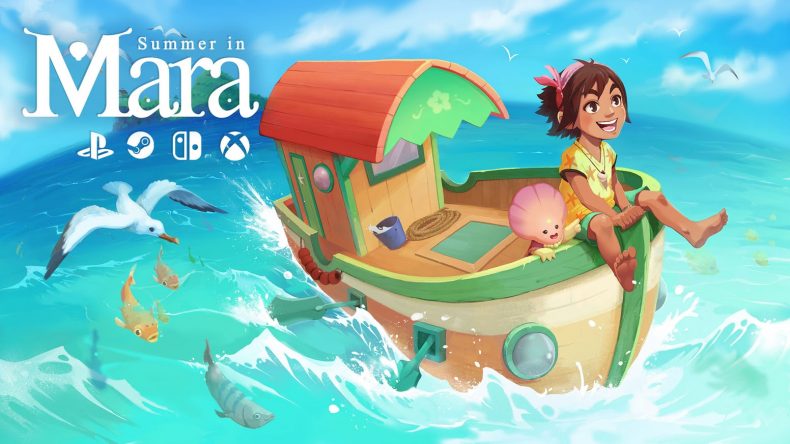 There’s lots of things I really like about Summer in Mara, not least the gorgeous art in the cut scenes. They are beautiful, Ghibli-esque, two dimensional creations and are utterly delightful. The world itself is bright and colourful, and it is inhabited with a cast of cute sea humanoid characters. The story too has a lovely uplifting message about how people should take care and responsibility for the environment around them. Sadly, a lot of what is really great about Summer in Mara is eroded away by some dull backwards and forwards style quests and a real lack of any meaningful waypoints or signposts as to what you should be doing and where you need to go.

You play as Koa, a young girl rescued by a kindly old lady called YaYa Haku one stormy night out at sea. The prologue serves an an introduction to life on Mara. YaYa impresses upon the young Koa that everything you take from the world should be replenished and this lesson is neatly achieved through the planting of a seed shortly after you have felled a tree for wood for some crafting recipe or other. It is a lovely sentiment, but one that doesn’t feel explored in any depth once the game itself gets going. In fact much of the story isn’t explored in any depth as there is far too much reliance on the player to be already familiar with the world and its belief systems. There is very little exposition to quickly paint a picture of the way this world works and the story suffers for it because there’s always a feeling that it’s assumed you know something when you don’t. This lack of clear direction transfers into the game play as well. My biggest frustration with Summer in Mara is that all to often you are given a quest which might be to speak with someone you have never encountered before and that is it. There is no direction indicator telling you where to go, and the map is meaningless in terms of helping you to navigate. It is an issue when you first begin on your tiny island that constitutes your home, but it is amplified when you leave that and start to explore the surrounding islands. As such there is lots of wandering around trying to find out roughly where you need to go. Thankfully when you are a little closer an arrow appears above the individual you need to speak with, but that is only visible once you are in close proximity. As such, there is a lot of dead time wandering around in circles, which feels very much like wasted time.

Despite the narrative threads, Summer in Mara is essentially a farming and crafting sim, with a steady drip feed of recipes from the various individuals she meets. Gradually as you progress you can shape the island that Koa lives on with areas to grow crops and rear animals. Your hut serves as your crafting space, and it is in here that she makes her tools and crafts various food recipes to sustain her. Koa has itchy feet and likes to explore, however anything that requires crafting to progress in quest objectives will require her to return to her home island as this is the only place she can do that. It is fine in principle, but you will end up going backwards and forwards between locations as you are first sent to one place to find out you need an item that needs to be crafted first, and you don’t yet have the recipe so you need to pick that up from somewhere else. It feels like unnecessary filler and combined with the lack of direction each time in terms of quest indicators it quickly becomes a chore, and one that I found very difficult to push through. It is a shame, because the individuals that you do meet and have conversations with are full of character. Each quest giver has a lesson for Mara to learn, be it with YaYa and her message that if you take you must also replenish, or an early quest that teaches Koa that she should be polite with people and not just expect them to help her. There is an enormous amount of characterisation delivered through the text conversations you have with each individual and those combined with the lovely art style made me really enjoy this aspect of the world of Mara.

Summer in Mara is ultimately a disappointing experience. There is a great promise in it, and with some real quality of life improvements I think it could be something else entirely. Things like a functional fast travel system, or the ability to craft some lighter recipes on the fly without the endless need to travel backwards and forwards between your home island would make a drastic improvement. Similarly some proper guidance on where to go, particularly in the early hours of the game where everything is new, would go a long way to negate the feeling that I had missed some vital piece of information at some point and that was why I was wandering around lost. There’s a good foundation here, the visuals and writing are strong enough to create a special experience, and the farming, whilst rudimentary, is satisfying enough, but there’s no escaping that in terms of your quest objectives there’s a lot of bloat and endless, over-lapping fetch quests that make playing it more of a chore than the relaxing experience it promises.

Summer in Mara is farming and crafting sim with a lovely message around sustainability. It features some beautiful Ghibli-esque visuals and strong character writing, but ultimately descends into endless, over-lapping fetch quests with a lack of direction that make it more of a chore than the relaxing experience it promises.

The Escapists The Walking Dead shuffling onto PS4