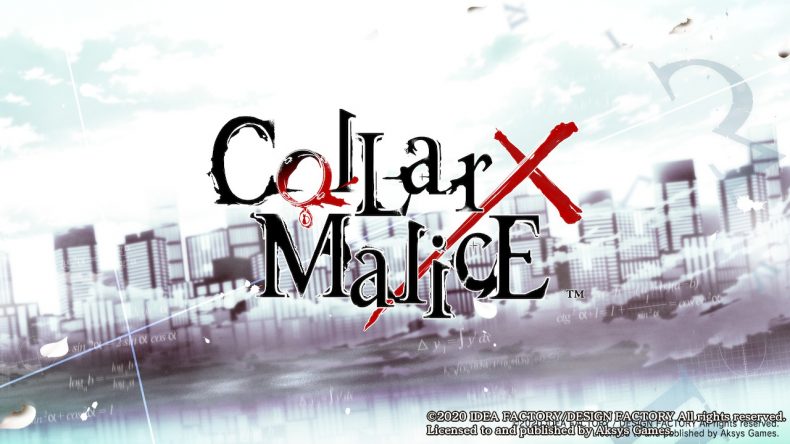 Switch Re:port covers the Nintendo Switch port/version of a game newly released on the platform. Collar X Malice released on PS Vita originally and was scored 8/10.

Beginning with the first Code: Realize game, Aksys has been bringing more and more otome games to Nintendo Switch. The newest is one of my favourites in the genre, Collar X Malice. Collar X Malice originally released only on PS Vita in 2017 and unlike the other otome games from Aksys Games on Switch, it was never ported elsewhere. Collar X Malice on Nintendo Switch brings the thriller detective experience that happens to be an otome visual novel to a hybrid system offering TV and handheld play options.

Otome games are usually pure visual novels but Collar X Malice shakes things up. It blends in bullet segments with QTEs, investigation sections, and more to make things feel fresh for those who have played otome games in the past. This also helps people unfamiliar with otome games ease into the niche by offering more than just reading. It also has multiple endings that have their own requirements and you are looking at about 30 hours to see everything here. Having already played it on PS Vita, it has been excellent to revisit one of the best otome games on PS Vita now given life on another system. In Collar X Malice, you play as Ichika Hoshino, a young police officer in Shinjuku that is currently quarantined thanks to a terrorist organisation. After a few events in the beginning, a new murder is set to occur each day and this is where you come into the picture. Hoshino wakes up with a collar around her neck after being drugged during an investigation and this collar can kill her. The otome portion of the game involves various potential bachelors with their own character development through branching paths. The survival and mystery aspect of the story definitely elevated the experience here.

Visually, it looks great for the most part docked. There are some instances when art is zoomed in where it looks blurry but the remainder of the experience looks and runs great docked. Handheld is excellent as expected all the way. It is good to see the art originally designed for PS Vita shine on higher resolution displays.

In terms of controls, Collar X Malice offers full touch and button controls when playing in handheld mode and full button controls when playing docked. Otomate continues to show how visual novel ports to Nintendo Switch should be done. Barring the hybrid nature of the console, there isn’t anything extra for returning players here. It does support the Nintendo Switch cloud save backup option if you own multiple Switch consoles and has an excellent icon for those who care about that. Overall, Collar X Malice on Nintendo Switch is the best way to experience this game. If you’ve already played it, there’s isn’t much for you barring the fact that this is now playable docked and handheld with touch and button controls. Players who already enjoyed this on PS Vita are better off waiting for Collar X Malice Unlimited that is out in a few months on Nintendo Switch. For everyone else, this is a great way to get into otome games with its gorgeous art and excellent music. I love it when developers try to push the envelope to keep things fresh after multiple releases in the same genre. I’m even more excited to play Collar X Malice Unlimited that gets its first English release this year on Nintendo Switch.

Collar X Malice is a great way to get into otome games with its gorgeous art and excellent music and the perfect game to play before Collar X Malice Unlimited arrives this year.