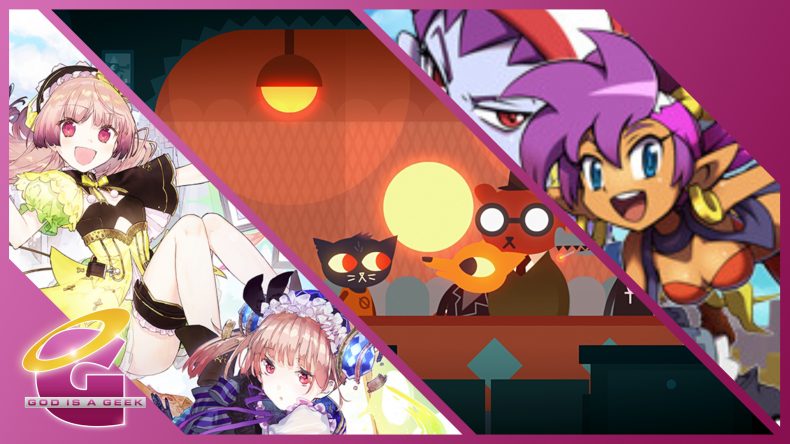 For the 10th Re:Port, I decided to slow things down a bit because there are too many games across different embargos and sometimes things don’t all line up together. If you aren’t aware, the Switch Re:Port is a collection of reviews that goes over Switch ports of existing games, new games on Switch, and even just anything on the Switch really. For this week’s early Re:Port I’ve looked at the new Atelier game that marks the first entry on a Nintendo platform outside Japan, Shantae and the Pirate’s Curse, and Night in the Woods. Get your materials ready for some synthesis with Shantae and Mae in this week’s Re:Port.

Shantae and the Pirate’s Curse

Originally released on Nintendo 3DS, Wii U, Xbox One, PlayStation 4, and PC platforms between 2014 and 2016 The Shantae franchise made its Switch debut with Half Genie Hero that is an excellent conversion and a fantastic game in general. WayForward went back and has brought Shantae and the Pirate’s Curse that originally released on the 3DS (before seeing releases on multiple platforms). It has been interesting seeing this release in particular that has a retro aesthetic for character models in game and the environment go to HD platforms. The 3DS physical release had an exclusive mini-game that was like a Shantae WarioWare game. That is now also present in the Switch release which marks the first time that has seen a release outside the 3DS retail release. Jake Kaufman’s soundtrack is as excellent as it was a few years ago when this debuted on the 3DS.

WayForward always do a great job with conversions and Pirate’s Curse on the Switch is a fantastic way to experience the release with all content from before together. The Switch version has excellent HD Rumble support. I think WayForward is one of the few developers to nail this in each release. Shantae looks and runs brilliantly on the Switch across both modes as well. It is a near perfect port as far as I’m concerned and the only thing I would’ve wanted more than the current release is a co-op mode with single Joy-Con support.

Night in the Woods Night in the Woods is an amazing game. It has great visuals, lovely writing, a memorable soundtrack, and superb characters. It originally released on PS4 and PC platforms and has you playing as Mae in a lovely story driven exploration game. Mae just dropped out of college and returns back home to see how things change and how some have remained the same. Gameplay is very basic and just involves interacting with objects or people in the 2D world while exploring. There are some rhythm game like segments as well though. It is well worth experiencing for the story.

The Switch port is almost excellent. Performance targets 60fps in both handheld and docked modes and the game runs at the native resolution for both modes which is great. Some situations where you’re moving around town with cars on the road see frame drops and the Switch runs quite warm with the fans on in handheld mode. The biggest offender in this port is the load times. They are far too long for a game like this. I hope they address this if possible in a future patch. There is basic rumble support but no use of the Touch Screen on the Switch in handheld mode. Night in the Woods is a great port considering it is a Unity game and we all know how those run on the Switch but the load times are kind of a deal breaker.

Atelier Lydie & Suelle ~The Alchemists and the Mysterious Paintings~ The first Atelier game on a Nintendo system outside Japan happens to have an interesting release. Atelier Lydie & Suelle ~The Alchemists and the Mysterious Paintings~ is the final game in the mysterious trilogy that began with Atelier Sophie on the PS4 and Vita. The Switch gets the third game in a trilogy directly (the games can be played on their own) while the PS Vita gets only the first two in the trilogy. This is definitely a very weird decision from Koei Tecmo. This game follows the twins Lydie and Suelle as they journey to make their atelier grow and become the best it can be. It has returning characters and as with other games in the franchise, it is a relaxing JRPG.

The Switch port is very inconsistent. In both handheld and docked modes, the frame rate is inconsistent. I shouldn’t be surprised considering it is 30fps on the PS4 Pro but it is so erratic that moving the camera in some situations might give you motion sickness. Loads of effects and textures have been toned down compared to the PS4 release as well. Atelier Lydie on Switch lacks various lighting effects making the environments feel even more bland than they do on PS4. Shadows are another thing that have been toned down quite a bit and in some cases they are straight up absent compared to the PS4 version. The only thing that looks great aside from the UI is the character models. In fact if you’ve been playing Atelier games on Vita, this Switch port will feel right at home to you. The environment design is a step back from the Plus Atelier games though. I was hoping this would be better experience after Nights of Azure 2 on Switch but it is most definitely not.

Note: Currently sharing screenshots is blocked. I’ll update this with a screenshot from the Switch version when possible.

Night in the Woods Review

Night in the Woods releases on February 21