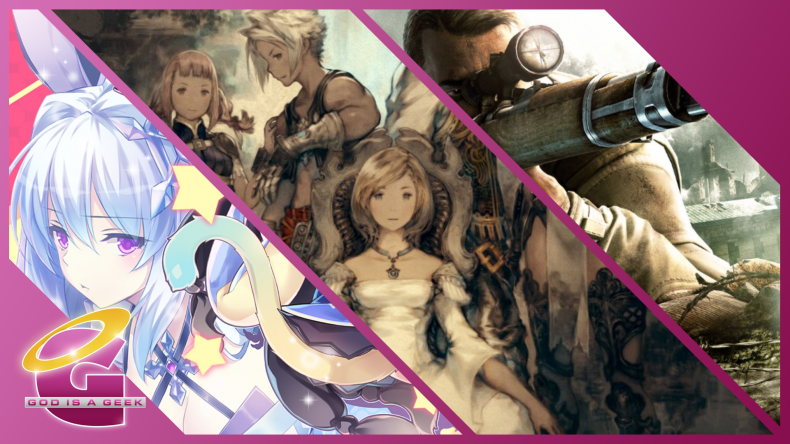 Today’s Switch Re:Port Review looks at one of the best Final Fantasy games of all time finally getting a portable release, Mick tackling the Switch port of the Sniper Elite remaster, and a game no one really expected to get a release in the West on console. If you’re new to the Switch Re:Port Reviews on the Geek, I (with the help of the fine folk here) look at the Switch ports of games that have been released on other platforms. These reviews aren’t just to talk about the game but to look at how the games run and play on the Switch and how they use the Switch features. After Square Enix released Final Fantasy X/X-2 HD Remaster on PS3 and PS Vita, everyone was looking at Final Fantasy XII and Square Enix delivered a fantastic package when The Zodiac Age hit PS4. That has since been ported to PC with some enhancements and now has arrived on not only Switch but also Xbox One with even more features. Having now played it on all platforms, the Switch release is definitely my preferred way of experiencing this gem of a game.

Final Fantasy XII: The Zodiac Age was already a massive step up over the PS2 version when it arrived on PS4 with a plethora of enhancements. The Switch version offers new features like license reset which is huge alongside new gambit sets and a better new game+. Having the ability to reset licenses so easily allows for more experimentation in play and I hope this gets patched into the PS4 version eventually. The Switch version offers one huge feature that I adore for a game like this and that is the ability to play on the go.

When it comes to visuals, the Switch version runs at subnative resolution in both docked and handheld modes but it isn’t Xenoblade Chronicles 2 level. Since the game itself is built using a lot from the PS2 version, it isn’t a deal breaker but is noticeable. It supports cloud save backup and video recording on Switch as well. One welcome addition to this port is the ability to use A or B as confirm. Considering how some ports completely disregard console norms with buttons, it is great to see the developers of this port offer the option to players. I hope Dark Souls Remastered gets this feature eventually.

With the enhancements and ability to play anywhere, The Zodiac Age on the Switch is everything I wanted from a portable release. It was obviously not feasible to have this on Vita but I’m glad Square Enix put this on a portable because the gameplay perfectly suits portable play and it is the full game with even more features than the PC version that was already a step above the PS4 version. I know its unlikely but the only thing I’d want more from this version is the ability to sync my save with Xbox One since I have that version as well.

Originally released on PS Vita (in Asia) and PC platforms The Switch has proved to be not only to be a great Nintendo system but also one for smaller games from all over the place. A lot of people want the Switch to be the true successor to the Vita for smaller Japanese titles and it is slowly getting there with the likes of NIS and Idea Factory bringing their titles to the system. One game I didn’t ever expect to see outside Asia let alone on a Nintendo system is Moe Chronicle. The PS Vita original dungeon crawler with a ton of fan service was localised into English for Asia and eventually released on Steam but it now gets a proper release with the Switch version that has been released all over on the eShop.

After the poor quality for the most part of the Fairy Fencer F port, I was a bit concerned about this release but thankfully, it has exceeded my expectations. It runs and looks very good both docked and handheld. This port also has full touch support including battles. It also supports video recording and has pretty good rumble support. In terms of an actual Switch port, there isn’t anything else I really wanted and I’m very happy with the use of Switch hardware like the touch screen coupled with how the game looks and runs in both modes.

Overall, this is definitely the version of Moe Chronicle to play since it has all the content, a few extras, and the ability to play on the go or at home on TV. If this is the standard for Idea Factory ports from the company, I welcome the likes of Death end re;Quest eventually.

As with Dungeon Travelers 2, there’s a lot of fan service in this dungeon crawler and if that puts you off, you should skip this. For those who want that, Moe Chronicle Hyper is definitely one that pushes things quite a bit and it is still pretty crazy to see this released digitally worldwide on Switch given how it never even released outside Asia on PS Vita. If you’ve been craving a first person dungeon crawler on the Switch, Coven is definitely a much better game but if you already played that, this is worth looking into if you’re after fan service. Now and then something comes along that may well enter my life in a completely innocuous manner and yet still make me question whether it’s existence is some kind of direct afront against me personally, like a fly repeatedly banging itself against the bathroom window two inches from the actual opening while I sit on the loo unable to shoo it out or kill it. It’s doing me no harm, and yet it offends me in some way nonetheless.

That’s kind of how I feel about Sniper Elite V2 Remastered on the Nintendo Switch. Not because it’s a particularly bad game, because it’s not, but because I have no idea what purpose it serves. It’s not the best or brightest Sniper Elite game, and really is only distinguished in any way because at a certain point it allows you to shoot off Hitler’s last functioning nut in glorious X-ray vision. I mean I don’t know, that might be enough to warrant a re-release but I can’t understand why a system that does a mostly passable job of Doom and Wolfenstein: The New Order wouldn’t be a better home for Sniper Elite 3 or 4. Or Sniper Elite: Nazi Zombies, which is quite possibly the best of the bunch anyway.

But hey ho, this is the side of the bed we find ourselves on this morning with Sniper Elite V2 Remastered on the Switch, a game that looks and feels so incredibly bland that if it weren’t for the aforementioned super slow-motion X-ray death-cam nobody would even remember it. In it you play franchise stalwart Karl Fairburne, a veteran recon sniper sent behind enemy lines to assassinate three key Russian scientists and therefore erase all traces of the atomic bomb launch codes they carry. A relic from a time before everything had to be open world and crammed to the crap-hat with microtransactions and side missions, Sniper Elite V2 presents a straightforward mission structure that almost feels progressive in today’s climate.

You bounce from ruined cityscape to secret base to featureless urban firing range with fairly simple instructions each time: reach a vantage point, recon the enemy, booby-trap your immediate surroundings and start perforating skulls and vital organs like you’re shooting plastic ducks at a carnival. What’s really quite interesting though is that you can tweak the difficulty each time, allowing you to decide whether you care about things like wind speed, resistance, direction, elevation, or all those little details that in other games might take the fun out of popping colons like party balloons. And it is actually a lot of fun in those moments, when you’re camped out somewhere shooting the heads off fascists like a a kid with a magnifying glass and a hive full of ethically-challenged ants. In fact, you can even see why it was so popular when it launched in 2012; I just can’t quite work out where it factors in today’s market, particularly on the Switch.

Perhaps the things that bothers me most about Sniper Elite V2 Remastered is that you can’t do anything about the weird controls. Rather than subscribe to the now-standard CoD shooter controls we’re all used to, Sniper Elite slings commands onto random buttons like discarded undergarments on a brothel floor. It’s a little bit frustrating, though not as frustrating as the fact that unless you’re actually using a sniper rifle for the business of sniping, the shooting is bloody awful. Any time the game makes you cross a shell-shocked hellscape to reach the next headshot node you’ll likely swear, and by the fourth or fifth time you’ll be sick of it and kind of wish the game was simply mission after mission of you in a sniper nest blowing slow-motion goolies off Nazi scum.

Unfortunately the Switch version brings nothing new to the experience and won’t incentivise you to play it unless you really enjoyed it last time or perhaps missed it, and believe that what Nintendo’s console needs is a half-decent sniper game tacked onto a really ropey 3rd-person cover shooter. Which it doesn’t. Sniper Elite V2 is not the worst Sniper Elite game (the first one is) but it’s also nowhere near as good as the actually impressive 3, 4, or Nazi Zombies, all of which I’m sure would play just fine on the Switch. There is certainly enjoyment to be had here, particularly if you go in dragging your expectations on a limp length of twine behind you, but otherwise you’re better off just playing the later games wherever you can.

You may also like
Final Fantasy XII The Zodiac Agenintendo switch

Dive back into Ivalice with launch of Final Fantasy XII

My time as a gofer boy in Final Fantasy XII: The Zodiac Age