previous
Once upon a Jester review
random
next
OlliOlli World: Finding the Flowzone review
0 likes 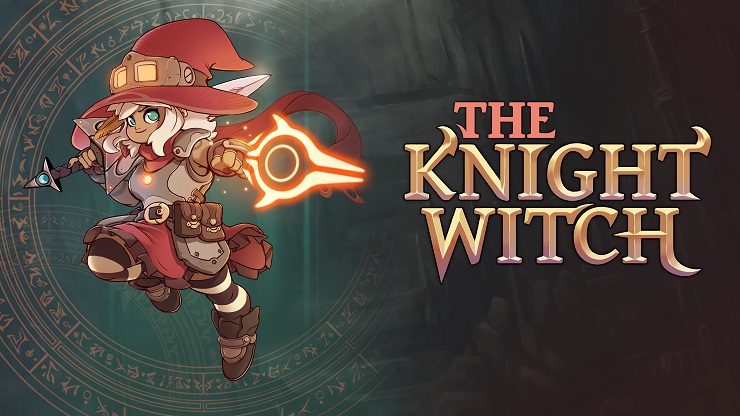 There’re a lot of different ideas at play in The Knight Witch, and having so many concepts at hand manages to breathe life into a genre that doesn’t always get it right. The bullet hell combat can get pretty intense at times, but having the card system to provide a literal ace in the hole makes fighting the waves of enemies so much better. Super Mega Team has crafted a wonderfully layered game filled with charm and humour, solid controls, and some gorgeous hand-drawn environments that continually impresses you the more you play.

Rayne wants so desperately to be a Knight Witch, one of the sworn protectors of the realm you find yourself in, and when the underground city of Dungeonidas is under attack, you get your wish. Once you begin to get new abilities and find/unlock new cards to use in combat, The Knight Witch opens up a lot. Not only when fighting, but also in traversing the different environments, as the Metroidvania elements start to show themselves. You might see someone who needs saving underwater or a doorway blocked by vines that are unreachable, but it’s clear those abilities will be unlocked at some point. 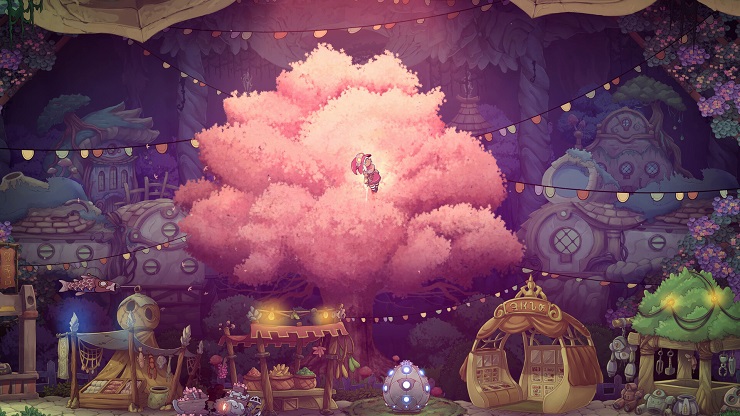 Using the right stick while shooting allows you to shoot in the direction your aiming, but you can also hold in fire to aim automatically, albeit not with the same effectiveness. Unlocking dashing makes everything so much better, as you can avoid incoming fire and attacks while trying to find a great opportunity to fire back. Most battles are intense, even when its just a handful of minions, but when boss fights are underway, your skills are tested to the max. Throw in countless environmental threats like those dreaded lasers, and you’ll find that The Knight Witch can be a hugely challenging game.

Luckily, your deck comes in very handy, and by selecting one of three buttons, you can choose a particular attack as long as you have enough mana. Enemies drop mana all the time, and you can find crates that replenish it (along with health) everywhere. There’re even glowing crystals that have an aura for you to bask in, refilling it as long as you’re in its presence. New cards can be unlocked and purchased, and by mixing and matching them, you’ll start to build up a collection that can be customised however you choose to play. 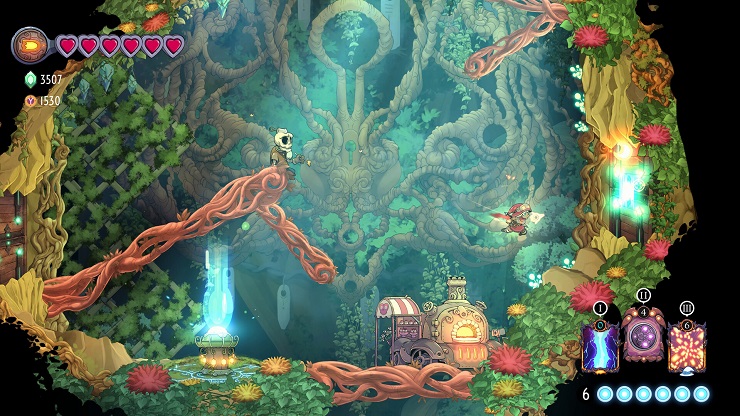 There’re defensive options to provide shields or remove projectiles, and some devastating attacks like lighting bolts, machine guns, and explosives that all range in power and duration. These attacks can be vital when overwhelmed by countless enemies, but you’ll need to pick the right moment to use them or else the golems will kill you quickly. Death is a constant, as The Knight Witch is a tough game to play, even with all the skills and cards you gain. It’s as much about pinpoint movement than it is about effective shooting, because the encounters have been designed so smartly you’re always on your guard and always required to move around the screen or else you’re going to die.

It reminds me of Hollow Knight in its design, just with a lot more colour and life. The various locations are filled with colour, whether that’s the city of Dungeonidas, the lush forests, or icy lakes. Along with getting around the maps, killing enemies, and finding items to solve puzzles, you also gain access to shops where you can buy health and armour, chat with NPCs and build friendships, and find tons of secrets hidden within. There’s plenty to keep you occupied, and much of the enjoyment comes from finding new areas once new abilities are unlocked where you couldn’t go before. 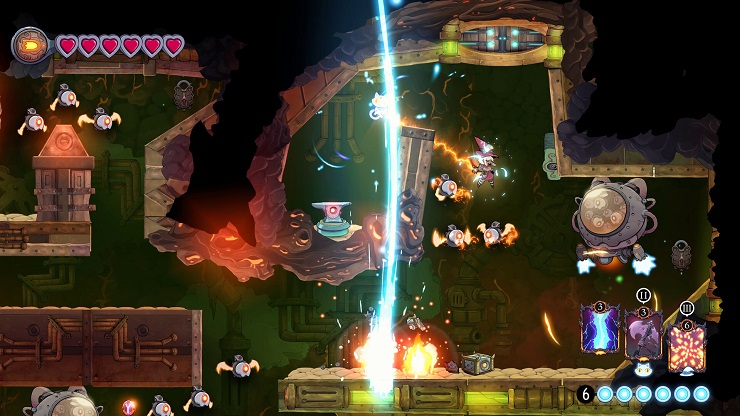 RPG elements also play a role in The Knight Witch. By helping others and making friends, you can build links to level up, and from there you’ll increase your attacks and your magic abilities. Health and mana can be increased along the way, meaning you’ll be able to last longer and also use cards that require more mana to initiate. Lots of moving parts make up your adventure, but they all blend well together to provide a fluid experience. I thoroughly enjoyed having to decide whether I would give honest answers when asked about certain things, as you can choose to lie and offer answers that give you more experience, or tell the truth to gain a moral victory and less XP.

Super Mega Team has thought of everything, and despite The Knight Witch getting harder with every new area, the satisfaction of clearing a level and defeating a boss makes you feel amazing. The art style is spectacular, and despite there being no dialogue, I fell in love with Rayne and her way of looking at things, along with the colourful cast of characters that support her. Combat and movement is tight and fluid, allowing the key combat concepts to work well together, and with every victory comes a great sense of accomplishment.

Can be very tough

The Knight Witch not only looks stunning, but the gameplay is tight and inventive, providing an enjoyable bullet hell extravaganza.