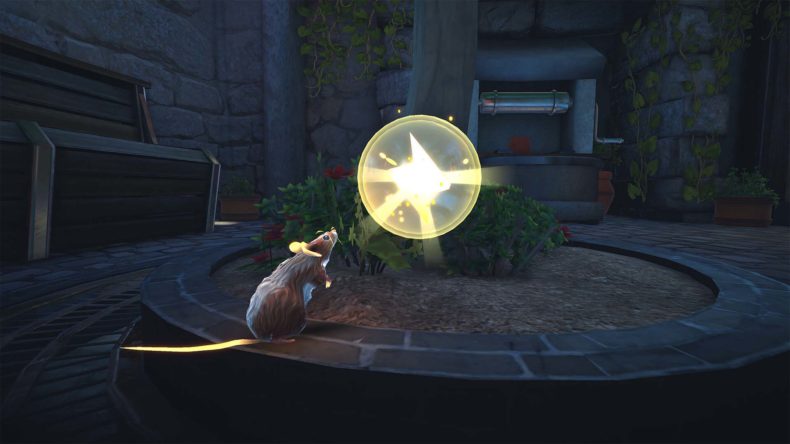 As someone who loves animals, I’m constantly baffled by how few games feature animal protagonists. I don’t need to play as a bland man holding a weapon anymore, just let me explore a forest as a spider or escape a farm as a chicken who’s sick of pumping out eggs. Thankfully my prayers were answered recently by Alblune Games, and their debut game The Spirit and the Mouse.

The sleepy French village of Saint-et-Claire is normally a lovely place to live, but on this particular night the humans living there aren’t having a good time. The village is having power issues, and because of this everyone is pretty miserable. Our hero The Mouse is upset by this, and despite being a small fluffy rodent decides to take action.

In her quest to save the day, the mouse collides with a magical spirit called Lumion who falls from the sky. Lumion was on the way to fix the voltage problems of Saint-et-Claire, but after the fall has lost his powers. Blaming The Mouse for this unfortunate set of circumstances, he decides to use the little strength he has left to grant it the power of electricity and sends it off to fix everybody’s problems. 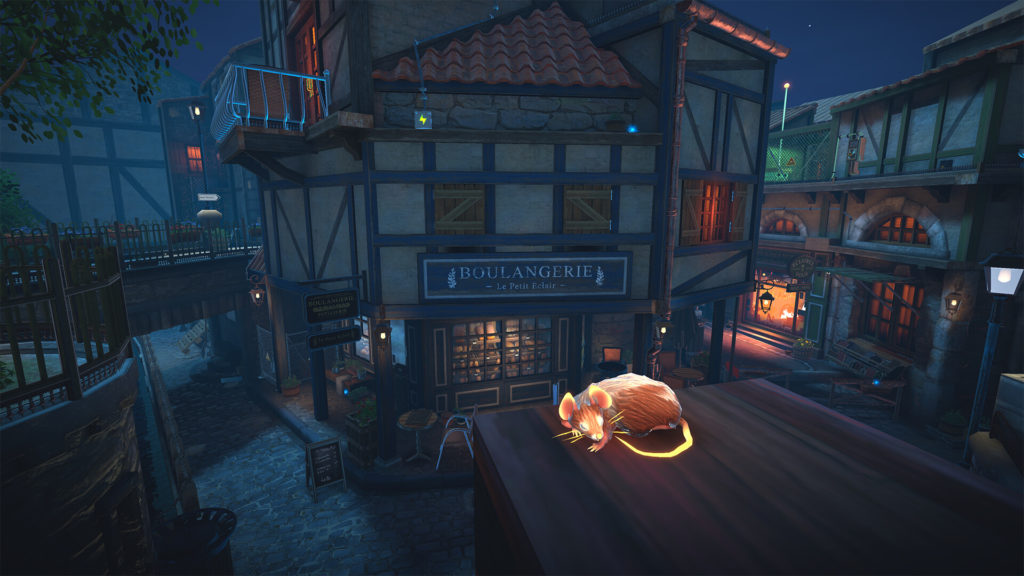 Getting around a village isn’t easy when you’re such a tiny critter. Our squeaky hero can move around and climb ledges, but when it comes to manoeuvrability that’s about it. Without even the ability to jump, you’ll spend a lot of time in The Spirit and The Mouse trying to navigate your way up onto the rooftops via many a trellis.

You’ll need to get on top of the villagers houses to access the Kibblin boxes that are up there. These handy devices power Saint-et-Claire, using weird electrical beings called Kibblins. Each box has 2-3 Kibblins missing, and it’s up to you to find them and convince them to get back to work. This is easier said than done, because these charming little sparks all have their own agendas.

You’ll have to complete a task for each Kibblin if you want to restore the power, and each of these is completely different. One Kibblin wants to make sure the menu of a restaurant has the correct prices listed before it goes home, whereas some younger Kibblins just want to play hide and seek. Some of these objectives require a bit of exploration, others are more of a minigame, but every single one of them is a joy to accomplish. 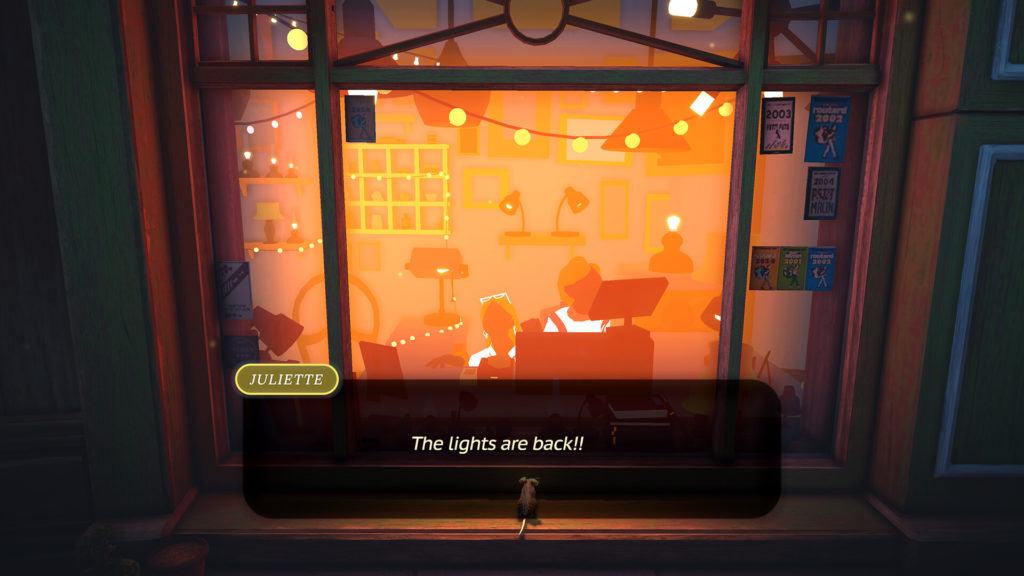 When you aren’t busy helping Kibblins, you’ll probably be looking for the collectable lightbulbs littering the streets. Every corner of Saint-et-Claire is a potential hiding place for these bulbs, so it’s well worth checking everywhere. When you hit certain milestone numbers of bulbs a Kibblin in the village square will sell you power ups like maps and speed boosts in exchange for energy, so you always feel rewarded for your diligence.

I haven’t yet talked about the electric powers of The Mouse, and honestly that’s because they aren’t really that remarkable.From the moment you get your new abilities you’ll be able to shock objects to get power from them (which is useful for the shop and activating Kibblin Boxes) and can travel through power lines to get from one place to another. Later you’ll also gain the ability to pass through chain link fences by turning into pure energy, but outside of that you’re still very much just a mouse.

There’s not a lot to The Spirit and the Mouse, but the relaxing nature of wandering around a quaint rural environment with gentle music in the background is just magical. There are no enemies or fail states in the game, and much like recent release Tinykin the game is all about the exploration. 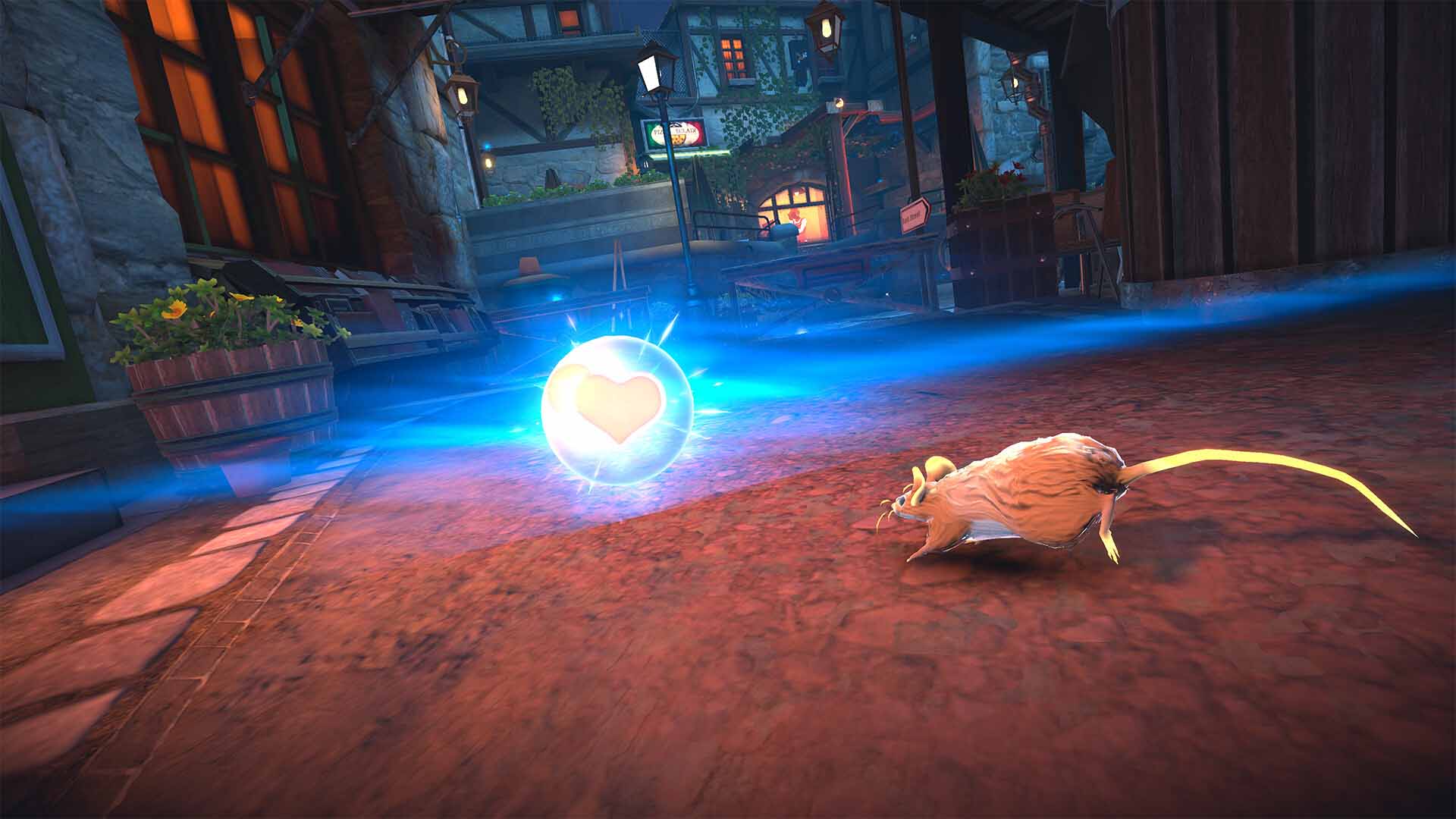 It’s worth mentioning how long The Spirit and the Mouse is, if only for the fact that I wanted it to go on forever. It’ll take you around four hours to roll credits, and maybe one more hour to collect everything. It tells a satisfying little tale in that time frame, but I’d be more than happy to dive into an even longer mouse-based video game.

The Spirit and the Mouse is simply a delightful game, with a lovely setting and no enemies or pressure to spoil the laid back experience. If you’re looking for action or challenge this likely won’t be for you, but for anyone else the adventure of a little mouse with a big heart is well worth playing.

The Spirit and the Mouse is a heartfelt and relaxing game that’s well worth experiencing if you don’t mind a lack of action.

You may also like
Armor Games StudiosThe Spirit and the Mouse