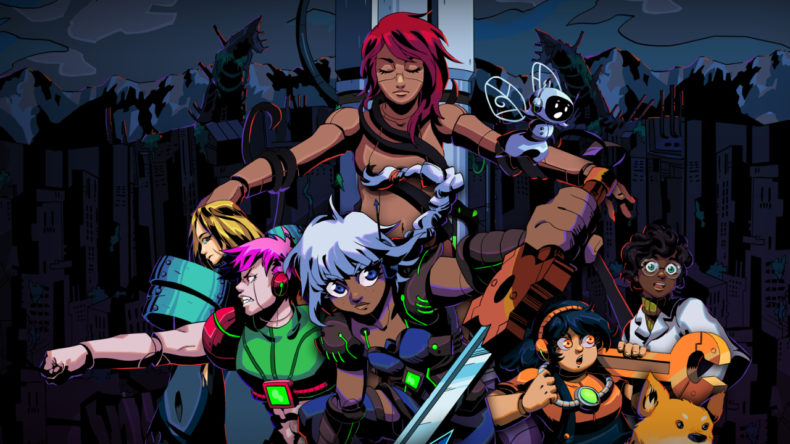 We are all blessed with a certain measure of time on this little blue-green rock of ours. Whether you believe your fate is predetermined or the future is up for grabs, the fact remains that sooner or later, everyone’s time runs out. But if you knew exactly how many hours you had left at any given moment, would you live differently? Would you make every hour count? That’s the central conceit in Unsighted, a new rogue-like Metroidvania from Studio Pixel Punk.

In it you play Alma, a highly advanced automaton. In this world, all automatons and machines were granted sentience by the impact of a mysterious comet, which emitted a power known as Anima. All humans either perished or fled in the ensuig war. The automatons won, but at the cost of much of the world. 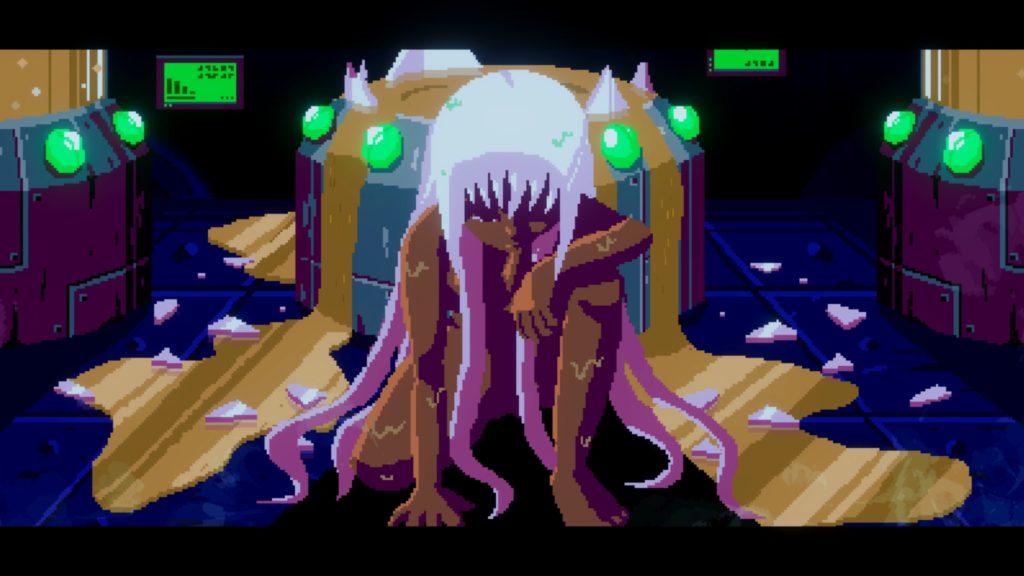 Now the Anima is dwindling, and automatons who run out of time become deranged killing machines known as the “Unsighted”. Alma is special, though, even among automatons. She received advanced combat training and conditioning, and so it’s up to her to climb the tower at the centre of the city to uncover the secrets of the Anima and save her kind from extinction.

First you’ll need to find 5 pieces of an eldritch Macguffin to allow you access to the tower, which means five areas to explore, and a pile of nails-hard bosses to contend with. This being a roguelike, the onus is on parrying and evading to stay alive, with more tools and abilities unlocked as you progress.

Armed with two weapons at a time, Alma can dish out melee or ranged damage. Weapons like the blaster can also activate distant switches to aid in traversal and solving environmental puzzles. Most Metroidvania tropes find their way in, such as a boosted jump and a hook-shot. The roguelike difficulty is tempered somewhat by plenty of fast-travel terminals that act as respawn points. However, make no mistake, Unsighted is seriously tough. 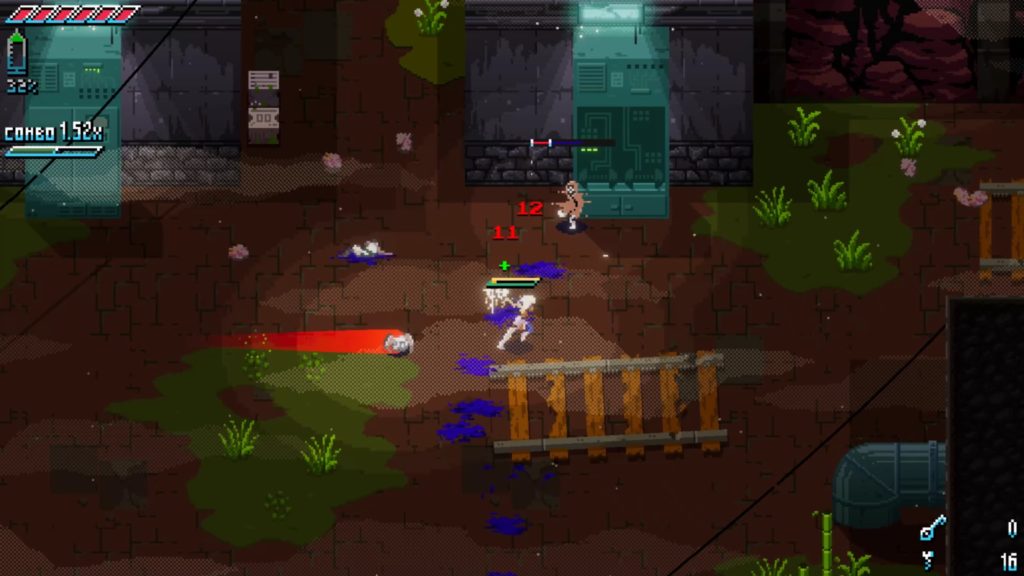 Some areas come close to bullet-hell, while some of the bosses are genuinely taxing. There’s one that will one-shot you every time until a certain point in the game. If you find you can’t progress, you’ll need to go look for alternate routes or new gear. There are hidden chests and tablets containing lore and backstory, revealing snippets of info about Unsighted’s tragic world.

You upgrade using Cogs and Chips. The former are installed on Alma but must be activatednand deactivated. While active they provide bonuses for a set time, such as increased damage for 20 attacks or high defence for 3 hits. They can make the difference in a boss fight, but are finite. Chips, on the other hand, must be installed in unlockable slots. Once installed they provide passive buffs or new moves and abilities like a Spin Attack, for example.

Combat is rhythmic and exhilarating, and has maybe the best sense of weight and impact in a pixel-art game since Dead Cells. It feels good to hack your way through Alma’s world, even if the stingy health refill mechanic means you’re constantly at Death’s door. 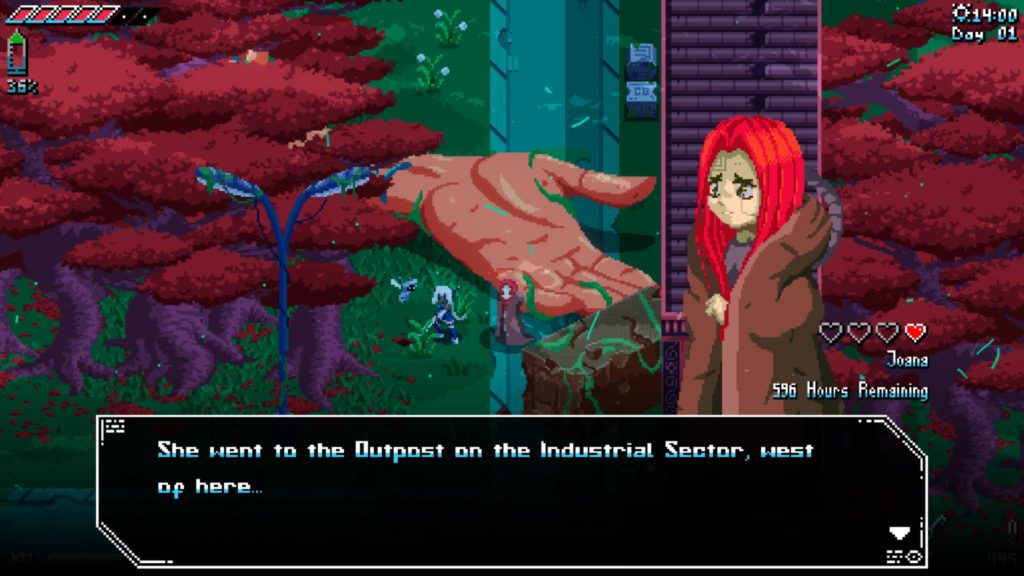 Speaking, of which, time is running out not just for Alma, but for all the denizens of this world. A countdown below the character portrait shows how long each NPC has, and it’s always ticking down. Each death robs a few hours at a time, which will lead to Alma’s eventual demise. Interestingly though, your NPCs can also die. This can close off quest lines, lore reveals, even services in Gear Village. Not only that, but when they do go Unsighted, someone has to put them down… Sometimes, amnesia doesn’t seem so bad for a video game protagonist.

The story has a few tangents, such as Alma’s relationship with two other automatons, Vana and Raquel, and the plight of the people of Gear Village. They are slowly going Unsighted, and so Vana sends the strongest out on veritable suicide missions to help those that remain. You’ll come across the remains of many as you travel. You’ll also find workbenches everywhere, upon which you can craft Chips, Cogs and weaponry from items you scavenge in the world. Death respawns enemies but doesn’t reset progress or take away your gear, and so it pays to craft and upgrade often.

If you don’t want to play the story or you’re done with the multiple endings and choices, you may opt for one of the other modes. Dungeon Raid is a pure roguelike, allowing you to select two starting weapons or items to see how far you can progress. This mode is fun but challenging, and offers a ton of replay value. It makes me wish I had it on Switch so I could stretch out on the sofa and run endless loops of Dungeon Raid. 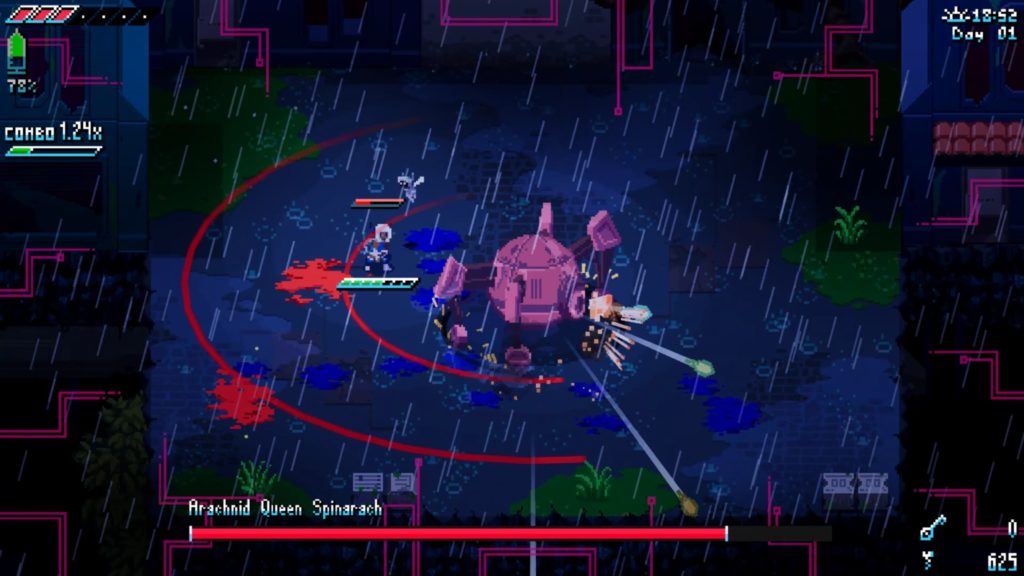 Unsighted: Well worth your time

Alternatively, there’s also a Boss Rush mode which is fairly self-explanatory. The couch coop multiplayer is also a nice, old-school option, though the screen gets super busy at times and the level art isn’t the easiest to decipher. In fact, it’s super easy to get lost, even with the map, because you can’t fathom where to go. Alma herself is beautifully drawn and animated, but there’s a little too much pink and grey going on to separate walkways and walls.

Go into Unsighted expecting a challenging time and you won’t be disappointed. It’s a nice-looking game with a great central concept that makes for a lot of replayability, some solid RPG-lite mechanics, and an addictive mix of combat and exploration. It’s let down by a really weird soundtrack that sounds all the world like lift music, difficulty spikes that come out of the clear blue sky to slap the smile off your face, and some level design that makes it very difficult to discern your elevation, let alone find your way out.

And yet, Unsighted is still an extremely well-made title. Hard enough to be a challenge, but just fair enough to hook you in for one more go, it’s well worth checking out if you’re after something tough but pretty to play through.

Unsighted is hard enough to be a challenge, but just fair enough to hook you in for one more go. Well worth checking out.