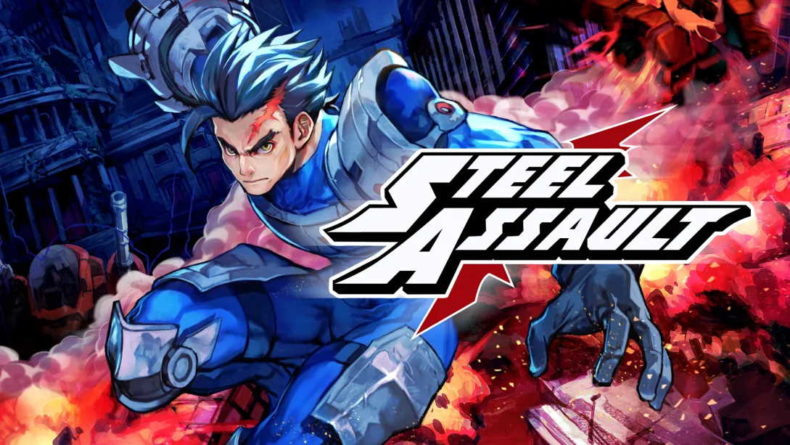 I won’t beat around the bush – as far as future-retro modern titles go, Steel Assault is an absolute banger. Raised as I was on the games that clearly inspired it, this long-in-gestation Kickstarter labour of love grabbed me the instant I fired it up, and didn’t let me out of its grip for the next several hours of hardcore run and gun action.

Developer Zenovia have proudly boasted that this is not a Metroidvania, or a roguelike, or anything remotely bowing to modern trends. This is a resolutely old-school experience that has beautifully designed linear levels, just like days of yore blasting through a Rockman X or Contra game. If you are of a certain vintage age-wise, it takes just a few minutes play to see that Assault draws upon just about any decent title from your youth.

Your hero is equipped with a whip-like melee weapon that can be employed multi-directionally, and comes off like a cross between Simon Belmont’s whip and Strider’s Cypher, and can be upgraded with power ups that add projectiles and all kinds of mayhem to it’s mechanical flail. Added to this rather handy tool is a Bionic Commando-esque grapple which can be aimed at platforms, vehicles and allows you to zipline your way around or dangle precariously in battle. It works as smooth as silk and becomes second nature within seconds. 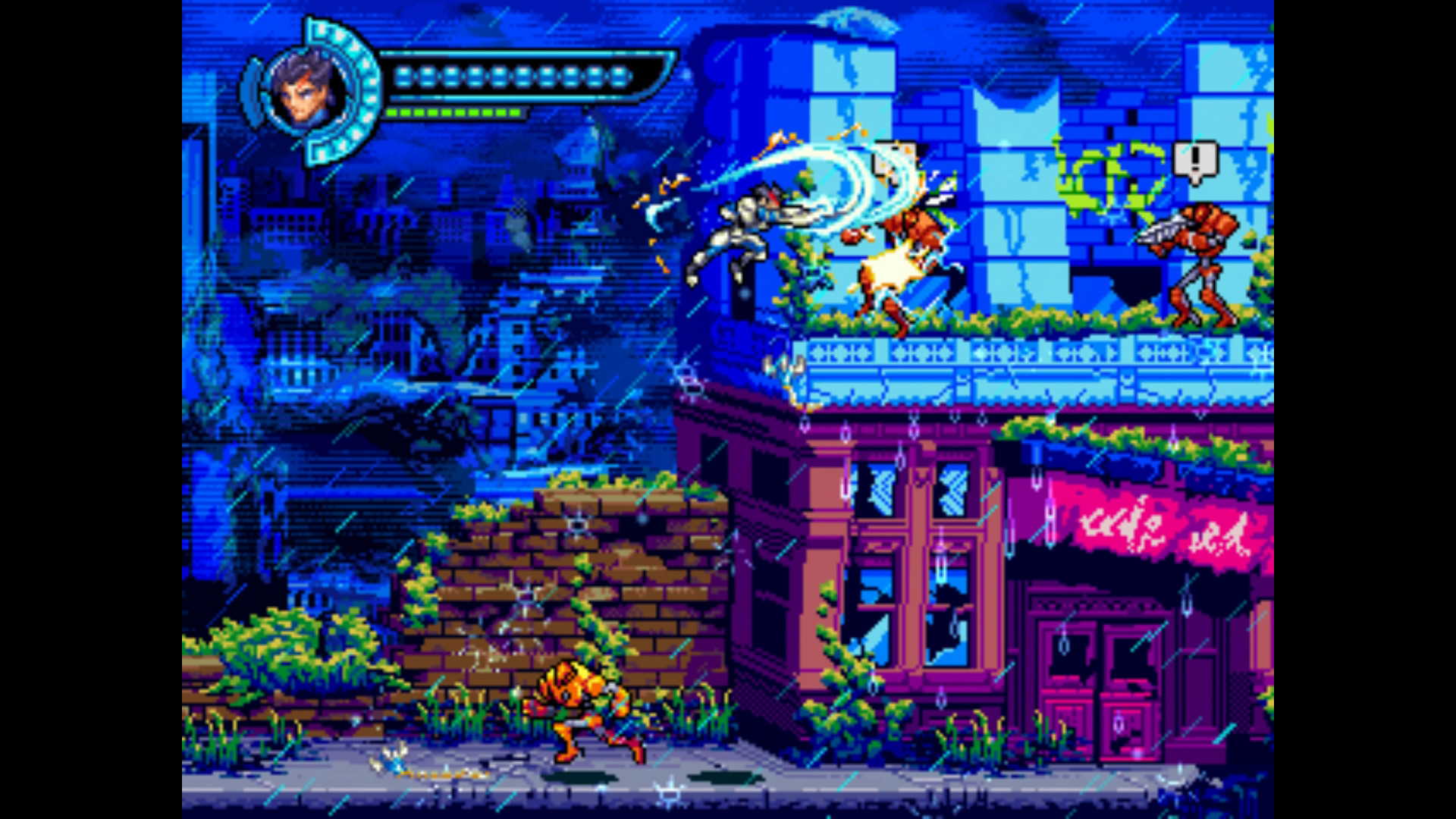 Movement is equally fluid – you can jump, double jump and slide. It feels like you are playing something special. If I had popped a cartridge containing this into my first SNES I probably would have spent the next week locked in my bedroom in front of my CRT.

It’s modern but keeps the feel of the era

Much like the legendarily brilliant genre pieces constructed by Treasure, or the almost cinematic way Contra III bombards the senses, Steel Assault plays out like a series of increasingly more staggering set pieces and situations and doesn’t let up from the throttle. That it does so whilst being entirely fair and beatable with practice, regardless of difficulty level, is an admirable feat. And it does get hectic, right from the off, as you are swarmed by enemies and forced into a death defying climb upwards with an instant death chasm beneath. 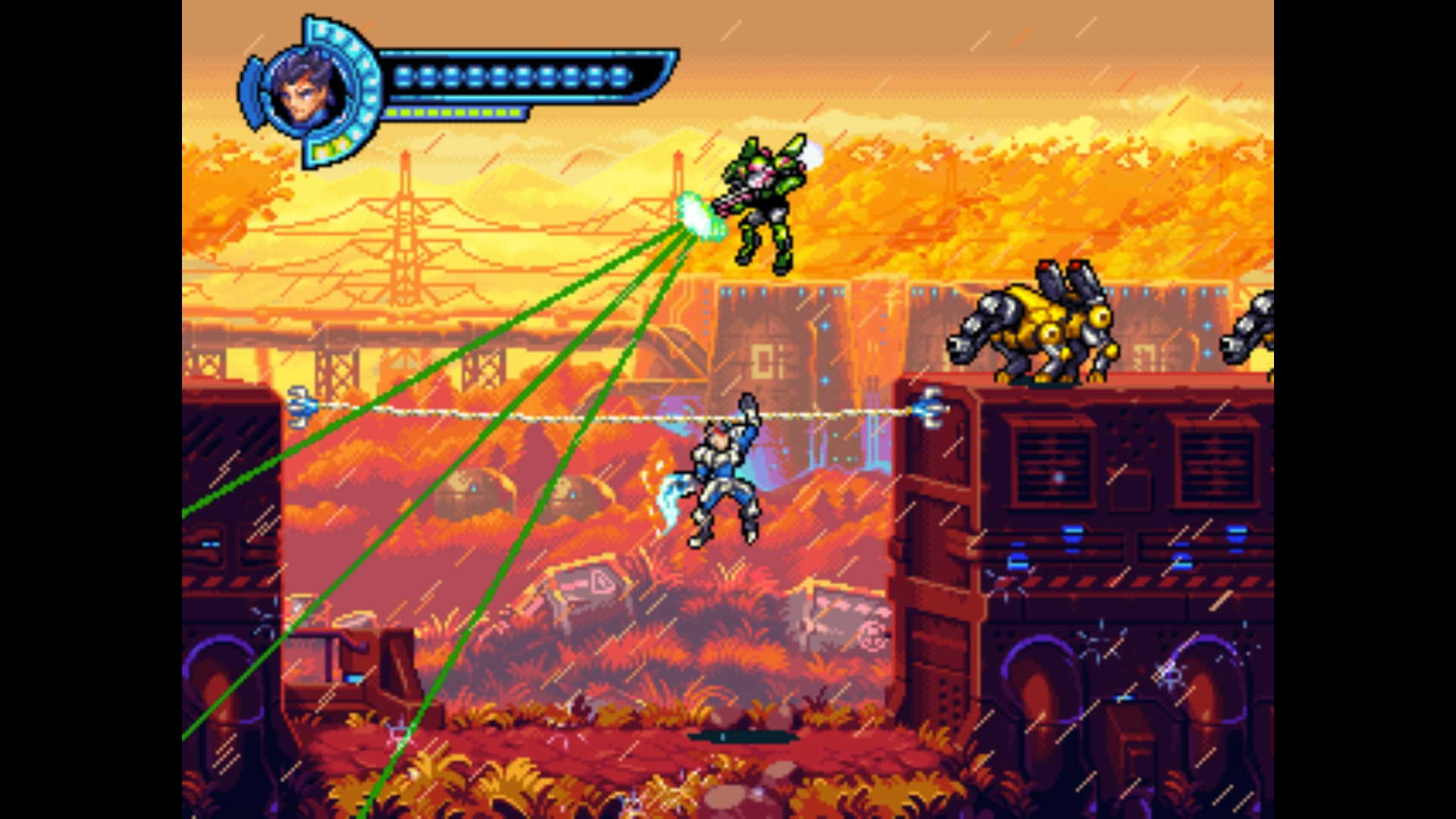 One minute you will be traversing the beautifully hand-drawn post-apocalyptic city on foot, the next you are riding a tooled-up speedboat, or hanging off the fuselage of a crazed flying contraption. There are bosses, mini bosses, into-the-screen perspective bosses, and standard enemies that feel like they could be bosses in other games. It looks and sounds incredible, with a panache that could probably not actually be squeezed out of 16-bit hardware, but completely retains the feel of that era.

I have played a tonne of modern, retro-inspired fare that find this kind of delicate balance very difficult. There is a very real reason why the myriad titles I have spouted off about in this review are regarded as classics – and that is because of their taut design, unforgettable atmosphere and perfectly measured gameplay. This is the first game that Zenovia have released commercially – what a way to enter the stage. This is a fantastic effort that was well and truly worth the wait, and deserves the full attention of action platform fans young and old.

May be too hardcore for some

A fantastic effort that was well and truly worth the wait, and deserves the full attention of action platform fans young and old.