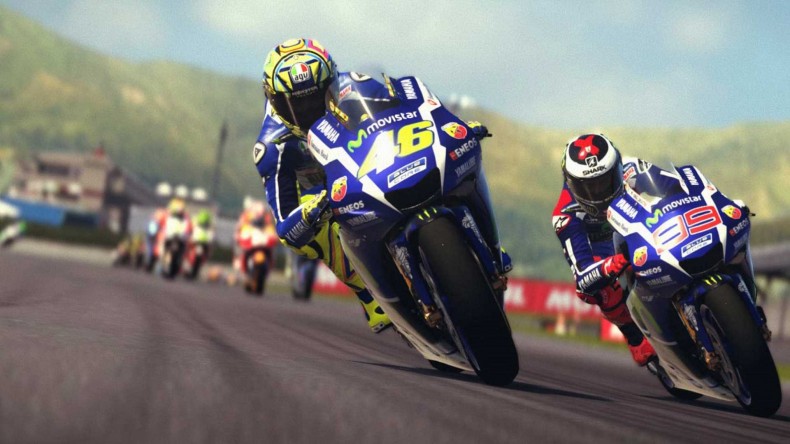 Racing games have grown in popularity over the past couple of years, mostly with the four-wheeled variety, as games like Forza Motorsport 6 (and the second in its Horizon spinoff series), Dirt Rally, DriveClub and even The Crew have kept players coming back again and again. The F1 series has also been popular despite a lacklustre showing in its current generation 2015 offering, and is probably still the leading format for structuring a believable and engaging career mode.

The MotoGP games, conversely, have struggled along with the majority of motorcycle-based racers in recent years. Their popularity has been confined to fans of the sport and haven’t really appealed to a more mainstream crowd, something that nobody has seen fit to rectify until now. Milestone has built a reputation for creating interesting racing games over the last decade, from taking over development of the MotoGP games in 2007, to the more hardcore simulation of its SBK series, proving that it is a developer capable of breathing new life into the motorcycle sub-genre of racing games.

When Milestone took over the WRC series in 2010, and particularly when it returned to the series with WRC 2 in 2011, it began to build a robust career mode that included building a rally team and bringing in new mechanics and other team members to help grow the brand and keep the player competitive as they moved up from an amateur driver, all the way up to a potential WRC champion. In Valentino Rossi: The Game, the developer has brought that same energy into the world of motorcycle racing. Instead of creating your own team however, the focus is shifted to a more personal level as you’re tasked with creating your own rider with the aim of taking them to the top level of MotoGP racing. With Valentino Rossi, one of the biggest names ever to grace the world of motorcycle racing, your rider will be guided through the various sports on offer in this new game. He will be with you when you start your career, competing at his MotorRanch track and learning how to handle a bike. The odd thing about this opening race is that it’s not actually on a traditional circuit, instead focusing on the new Flat Track style which is essentially dirt bikes, handling very differently to the Moto 3 bikes you’ll be racing on initially. It throws you in at the deep end, trying to teach you how the handling model works and how shifting weight around quickly can throw the bike off-balance through twisting chicanes, but it doesn’t punish the player for not winning. It is designed as a tutorial of sorts, and once you’ve completed that race you’re free to explore in any way you see fit.

There is plenty to explore here, too. There is the full career mode mentioned earlier, in which you move from the lower Moto3 class all the way up to MotoGP; there is the standard MotoGP mode in which you can run a championship at the top level right from the off, based on the current 2016 season; the VR46 mode allows you to take part in the various Riders’ Academy events, such as the Flat Track races and even rally and drifting events. On top of these modes, there are even historical challenges in which you will be taken back to various points in Valentino Rossi’s career, and tasked with recreating those events in-game. It sounds tedious and is definitely a bit too much of an advert for the titular rider, but it adds an extra layer to an already generous amount of content in the game.

The handling here is incredibly realistic but, much like its four-wheeled counterparts in the Forza Motorsport and F1 series, can be tailored to suit almost any player. Braking and steering assists can aid new players, along with a racing line to help them learn how to ride each track, and a realistic physics option can be applied for the more hardcore player, recreating the more punishing style of Milestone’s SBK series. This game also introduces something that all racing game studios could learn from: a guided set-up for tweaking the handling during practice runs. Just tell the mechanics how the bike is behaving, via a simple menu, and they’ll tweak the bike accordingly. This is the sort of thing that could greatly benefit games like F1, Forza and Gran Turismo for those players who just don’t know the ins and outs of engines, etc. Racing itself is great fun, even on lower difficulties it can offer some exciting and tense races against over 30 opponents, thanks to its full grids. The AI is a bit too aggressive though, as it rigidly sticks to the racing line like in a PS2 game, no matter who is in its way. It doesn’t stop the game from being fun, but it’s definitely frustrating when you’re on a qualifying lap and a slow rider just blocks your path. Luckily, the rewind feature made popular by other games enables you to correct these mistakes – or mistakes of your own, as you inevitably take a spill off your bike during your career.

It does suffer from being the first in the MotoGP series to be developed solely on PS4, Xbox One, and PC, much in the same way F1 2015 did. Visually it has some nice lighting and some sharp textures, but trackside detail is lacking, making it look like a game that was developed for the PS4/Xbox One launch, rather than a game released over two years into their lifespan. It is detailed in places and night races or wet races look very nice, plus the framerate is silky smooth, but perhaps it will take another release in 2017 to get things right.

Overall, the breadth of content available in Valentino Rossi: The Game is astonishing, and will keep players going for months at least. New players are finally welcomed properly, only time will tell if they’ll stick around, but the hefty career mode and its friendly nature will be a big help in that department. Maybe it’s time for two-wheeled racers to make a comeback.

A career mode from which other developers could learn
A handling model suited to almost everyone
Exciting races
A ridiculous amount of content, with nearly 50 tracks and plenty of game modes

Valentino Rossi: The Game may be too much of an advert for the motorcycle legend himself, but it finally brings the MotoGP series back to the top of its game.