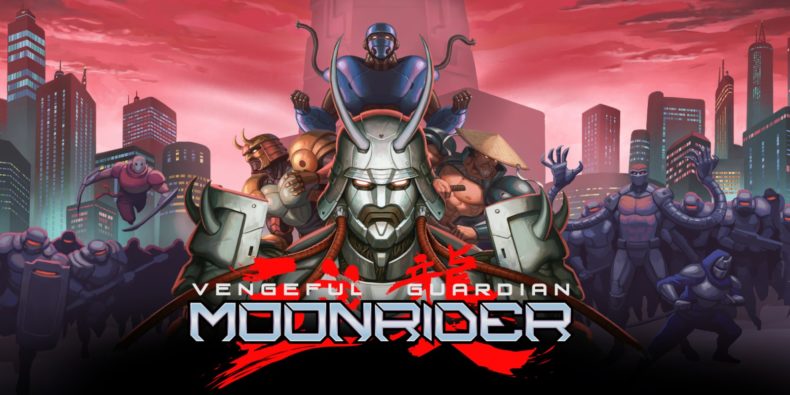 When I’m in a bit of a gaming slump, I often find the best way to shake it off is by going back to the classics. Chunky pixels and hardcore difficulty are guaranteed to get my gaming juices flowing, so it’s not uncommon for me to squeeze in a playthrough of an NES Mega Man game or fail happily at Shinobi for an hour or so. You don’t have to plug in a dusty old console for that classic action platformer fix though, instead you can just play Vengeful Guardian: Moonrider.

Our super powerful robot protagonist was designed to fight back against the rioting masses who want to overthrow their tyrannical rulers, but something has gone wrong with its programming. After realising that its combat abilities are being used for evil, our metallic hero sets off to destroy all the other robots being used to oppress the people in the hope that the world will be a fairer place. This means there’s a whole lot of slashing and jumping in your future. 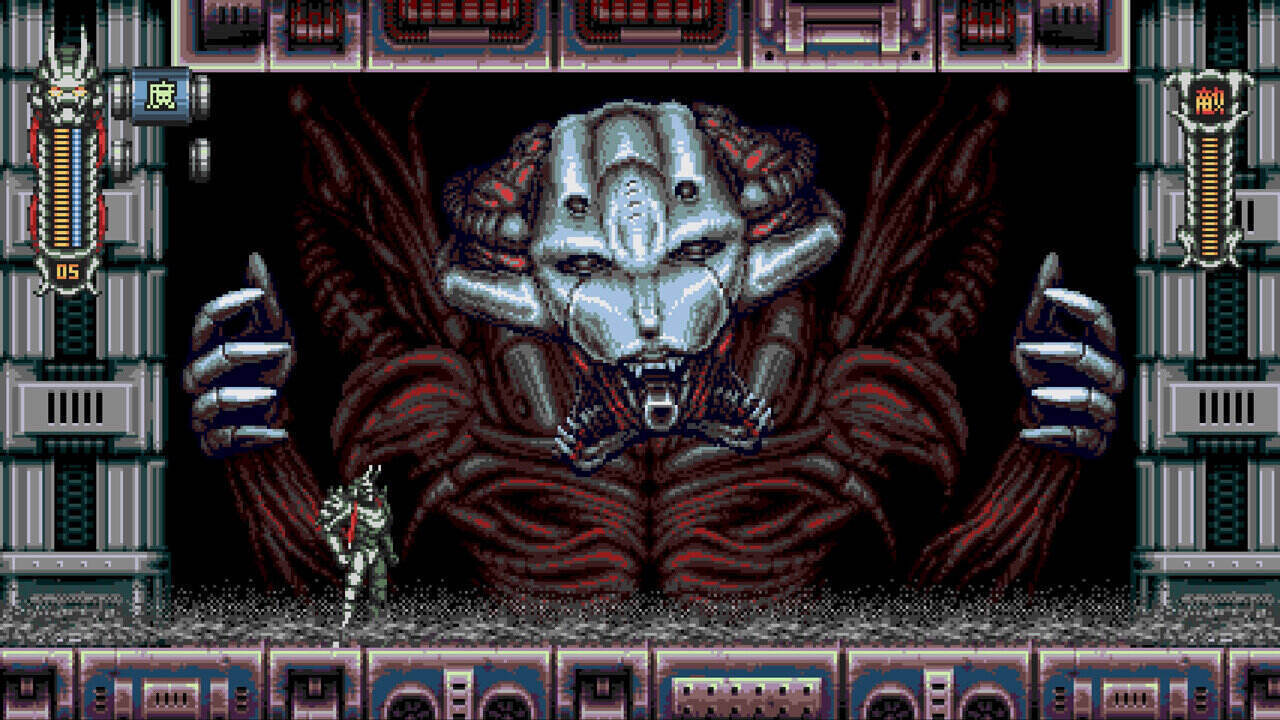 Controlling the Moonrider is fairly simple, and consists mainly of moving, slashing and jumping. For speed lovers a double tap of a direction will send you running that way, and can lead to a powerful running slash. There’s also a diving kick you can do from the air and some wall jumping to indulge in. Although it may sound like a bit of a limited moveset, you’ll have to master it to make it through the six stages and reach the robot villains on your hitlist.

Much like those classic blue bomber games, you can pick any of the stages to take on first. There’s a real variety in what you’ll find in these challenging levels. One sees you running through a forest being blasted by a mech in the background, another is a labyrinth of water filled pipes. There’s even a level where you ride a radical motorbike. The one constant is that there’s a boss you’ll find at the end.

These boss fights are always a blast, with plenty of attacks you’ll need to memorise if you want to keep your health bar. I always enjoyed dodging screen filling attacks and finding a moment to get my blade in, although admittedly spamming the attack button for long enough was often a route to victory too. 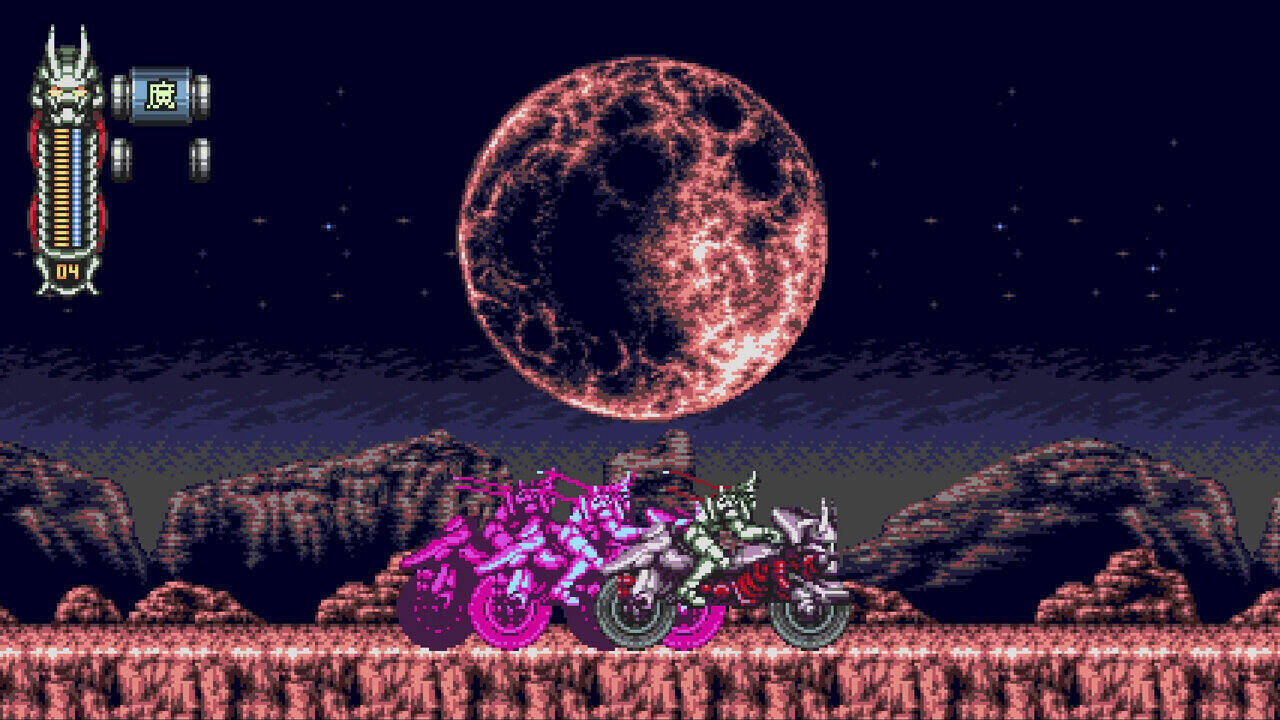 Another similarity between Vengeful Guardian: Moonrider and Mega Man is that each of these boos robots will give you a new weapon once you beat them. I never worked out if these abilities were super effective against certain other bosses, but I certainly enjoyed using them. These attacks use up a magic meter, and really help upgrade your offensive capabilities. Whether I unlocked a flaming boomerang or the power to open up a portal to a tentacle filled dimension, I always appreciated a new way to take down my oppressors.

As well as growing stronger up by getting new powers, you can also find chips to install in the robotic protagonist hidden in every level. You can only equip two of these at a time, but they make a huge difference to the way you play. The first chip I found gave me a very slow health regeneration which was a huge upgrade, then I found one that helped me deal extra damage and made me feel like a god. There are all sorts of other options too, from a double jump that makes any platforming problems feel trivial to the ability to change your colour for more stylish slashing. 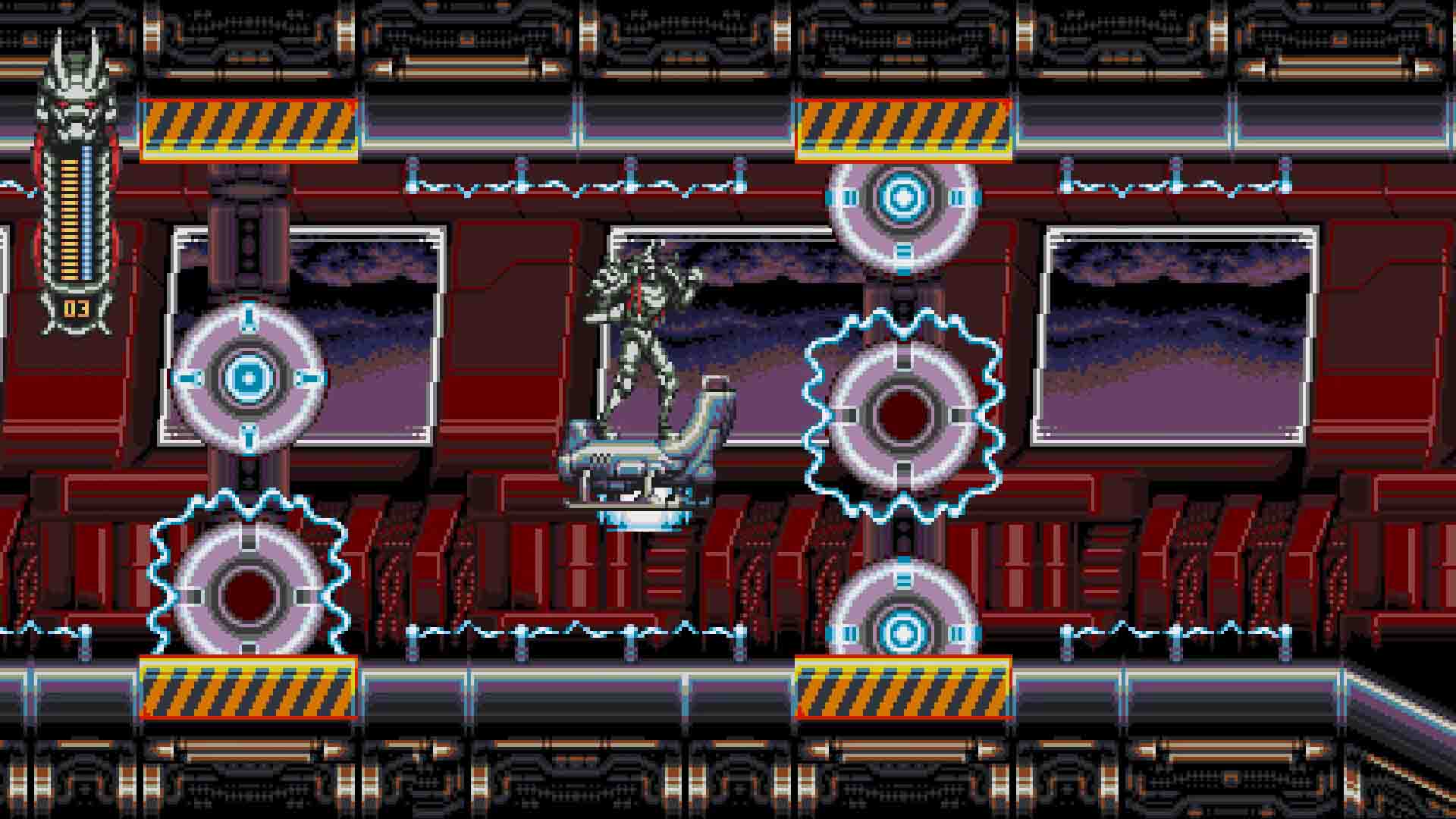 As good as it feels to upgrade your character with these powerful chips, they do end up ruining the balance of the game. Once I found the right combination of upgrades I ended up maxing out my lives and beating most bosses on my first attempt, and that just isn’t what I want from a retro style action platformer.

I should mention how much the developers absolutely nailed the 16-bit aesthetic. Vengeful Guardian: Moonrider absolutely looks like a game you’d play on your SNES after school, and the funky soundtrack fits right in too. Even the runtime is positively retro, with the game clocking in at around two hours total. The nostalgia factor is simply off the charts.

Vengeful Guardian: Moonrider is a lovely retro treat to start off the year, with interesting stages and sword slashing action. The game was a little easy for my tastes once you start powering up, but the bosses and pixel packed visuals more than make up for it.

A bit too easy
Is over too quickly

Vengeful Guardian: Moonrider is easy to recommend for those longing for retro platformers, but is over a bit too quick.