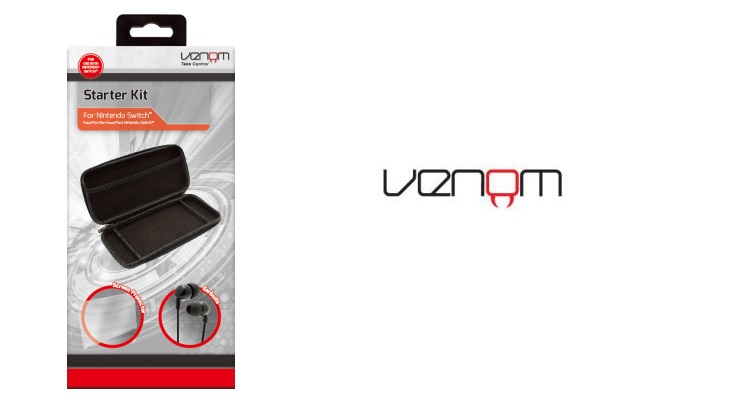 The Nintendo Switch is a lovely piece of kit. There it sits, snug in its dock while you sit on the sofa playing Breath of the Wild when you find yourself having to head out to a friend’s house, or work, or something or other. Up you stand, slot the Joy-Cons into the rails, lift it up, and off you go. The games look great on that screen and you’ll want to do your utmost to protect it, but what should you buy to do this?

There’s always a raft of accessory bundles when a new console launch and the Switch is no exception. There’s an officially licensed Nintendo case and screen protector, which is fine and dandy, except that it doesn’t come with a screen wipe for removing dust before applying the protector. One frustrated attempt later and I’m left having to throw it away.

Venom’s offering is a bit different, it comes with a cleaning cloth for one thing, although it tends to molt while being used, so a considerable amount of wiping is required before you can commit to applying the protector, but it’s a sturdy piece of plastic, nice and tough, so once it’s on you’re safe in the knowledge that your screen will be okay. The sticker indicating the side that the peel off film was on the wrong side though, so that led to a very confusing few minutes before I realised. You’d be forgiven for thinking that the thickness of the protector would lead to issues with touch detection in tablet mode, but this isn’t the case. Menus work fine as and I was able to play VOEZ with no issues whatsoever. It’s tough but functional, just as a protector should be.

The case is also a sturdy beast, much tougher than the official Nintendo offering, but it is an unattractive black shell. There’s no embellishment or detail, it’s just a great black expanse designed to keep your Switch safe. There are two elastic straps inside that wrap around the Joy-Con ends that will hold your console in place, and there’s a mesh pouch on the underside of the lid to hold any accessories you want to take with you.

A startling omission though is the lack of elasticated pockets for cartridges (you know, those disgusting tasting things that way too many people are putting in their mouths). This obviously isn’t a problem if you want to go completely digital, but considering storage is at a premium and microSD cards can only be so big, you will eventually get more than one physical game, so why there’s nowhere to put your games in here is beyond me.

The kit also comes with a decent set of in-ear headphones too. The rubberized ends aren’t too big so they won’t make your ear canals ache (an issue I regularly have with earbuds) and after a while I completely forgot I was wearing them. The sound quality isn’t the sort of thing you’re going to rave about, but you’ll hear everything you’ll need to and they’re comfortable to wear so all things considered you could do much worse than Venom’s offering here.

That’s basically it. Venom’s starter kit offering is extremely no frills, but it does the job it’s supposed to. The sticker issue with the protector is most likely a one off, and aside from that it’s a much better prospect than the one that comes with the official Nintendo kit. And while Nintendo’s official case is nicer to look at (and has those wonderful elastic cartridge pockets) the Venom case feels like it’ll keep your console safe should you accidently drop it. That sturdiness is the standout feature here for this set, and at £14.99 it comes in cheaper than the official kit, plus you get an okay set of headphones in the bargain. So, if you can see your way past those niggling issues you’ll find yourself secure in the knowledge that your Switch is well and truly protected.