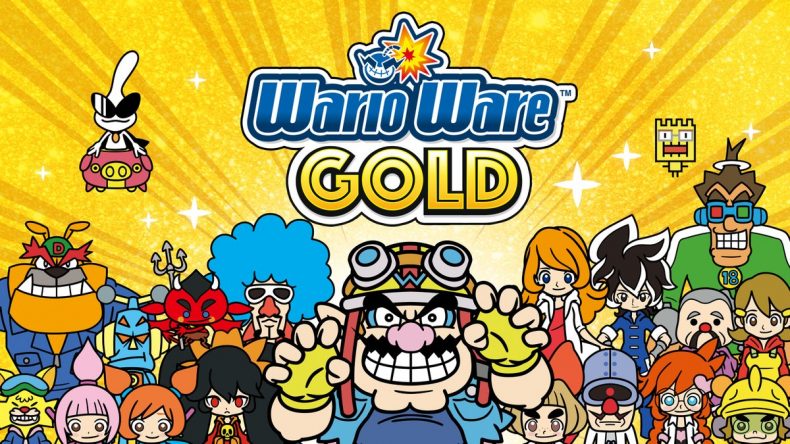 Five years it’s been since Wario last graced us with his scattergun take on electronic entertainment, but now Wario is once again in need of money and instead of doing things the easy way and either selling something or getting a job, Wario decides on a grand tournament with the overall goal being to stiff people for an entry fee and not bother giving the winner their prize. The thing is, Wario seems to think games are for people with incredibly short attention spans.

My son has ADHD and as a result finds it hard to concentrate on individual things for significant periods of time, which is why WarioWare seems to be a perfect fit for him. For those not in the know (where have you been?) the main aim of Wario Ware is to figure out what you have to do and execute it before the time runs out, and then do it again and again. Each action is referred to as a microgame and they last literally seconds, for some you’ll need to push a direction or the A button, others you’ll need to tilt your DS, or you might have to blow into the microphone or poke the screen with your stylus, most of the time you’ll be told what action you need to take, but others you’re left to figure it out yourself.

Things don’t just proceed leisurely either, it starts off at a relatively decent lick, as you work games out and believe you’ve started to get to grips with what’s going on the game gets faster and you’ll need your wits about you as the games change up. It’s even better when you’re doing a mashup of all the game styles as you’ll need to remember what inputs do what; it can really fry your brain when the music’s tempo increases and the bomb timer at the bottom starts shrinking quicker and quicker. Every now and then the action is punctuated by a ‘Boss Battle’ which if anything can come as a welcome respite from the chaos, because it all slows down, there’s no timer and all you have to do is successfully enter the required inputs.

The microgames are introduced via a series of colourful characters which range in terms of quality. They’ve all got distinct personalities, but the way they’ve been drawn in the game is a little odd, with some seemingly nice and sharp with others rendered fairly blocky, sometimes in the same scene, which is really odd. But it’s the microgames themselves which are the stars, picking noses, plucking hairs, lifting weights, rubbing out pictures and even shaving the earth. The games are as nonsensical as they come but the way they surprise you never fails to satisfy. While those with a lot of the games of yesteryear, the microgames on offer from 5 Volt, 9 Volt and 18 Volt offer a nice dose of nostalgia. You’ll find Starfox, The Legend of Zelda, Super Mario World, Balloon Flight, Metroid and more included within the quantity of zany tasks you’re asked to complete.

WarioWare Gold is packed with other stuff and unlockables too. The story mode itself can be completed in a couple of hours, but from there you have challenges such as a gauntlet to complete as many games as you can before you lose all your lives, or with only one life. There’ll be ones where Wario impedes you by reversing your controls, or my son’s personal favourite Sneaky Gamer. Sneaky Gamer comes from the Wii U’s Game and Wario where as 9 Volt you’ll need to try and play while his mum 5 Volt tries to catch him. When you hear 5 volt coming you’ll need to time a press or the L and R buttons to make 9 Volt pretend to be asleep, and when she leaves you release the buttons to continue playing, it’s tense, but a lot of fun. There are missions you can complete by replaying the modes and achieving set objectives which grant you coins, coins can then be used in a capsule machine which unlocks items within the game’s Toy Room.

Boiled down to its basic element and WarioWare Gold is a high score chase, you go again and again to complete as many microgames as is humanly possible, and the thing is despite being a single player game it’s brilliant in groups. Have a turn while everyone watches over your shoulder then pass it to the next person and see how far they get, the competitive element ensures the hilarity increases. Thing is, Nintendo understands that, hence why the story mode is based around a videogame tournament of Wario’s making, which just adds to the silliness because, let’s face it, everyone should know not to trust Wario by now.

WarioWare Gold is a great slice of Nintendo craziness, it’s a celebration of their unique gameplay, their retro history and tight design on minimal inputs. There’s the right mish-mash of microgames in here as well, with returning games mixing brilliantly with new ones and the best elements of past titles. My son is eight-years old, and to be honest if a game isn’t all that good then he’s not playing it, and he absolutely loves this. Granted it’s not like the gameplay has evolved over the last fifteen years, but if you’re in the market for a bit of madcap fun this WarioWare is indeed Gold.

Mad, silly fun
Plenty to do

Wario Ware is back and like all the bozos who fall for Wario’s schemes we really should fall for this all over again.