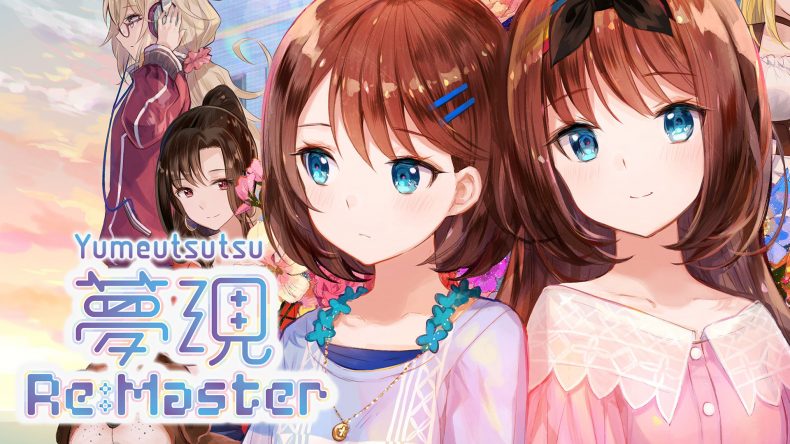 Unlike the Nurse Love games, Yumeutsutsu Re:Master’s tale is set in a game studio in Japan. You play as AI Otori who moves to a city to work in Eureka Software alongside her sister Kokoro. Eureka Software sees AI not only move to a city after living in the countryside, but also get thrown into game development with no real prior experience. Through Eureka Software, AI learns the ins and outs of game development, crunch time, missing deadlines, and more as the company tries to release a new version of a popular doujin game. This happens through interactions with various employees and people they are involved with at the company. In terms of story routes and the actual game flow, Yumeutsutsu Re:Master doesn’t have a ton of endings, but it makes up for the number in the sheer quality and length of the routes. There are three main characters that have their own good and bad endings before you are able to attempt the true ending in the game. These routes are very long and I spent about 70 hours to get everything I wanted from the story. Just like other Kogado Studio stories, expect a slow burn initially. The difference here is that the pacing felt a bit more erratic. If you’ve watched the Shirobako anime, this feels like a visual novel version in premise but a game studio instead of an anime studio.

Yumeutsutsu Re:Master’s true ending is brilliant and half of the character endings were amazing. The only route I didn’t like is Nana’s story because it ended too abruptly. Marie’s (the artist) story was very well done and Saki (nocturnal writer) was a bit too long. The one thing to keep in mind is this game had different writers tackle the individual character routes so some characters felt different in others’ routes. I love how the story can get meta because you are playing or reading a visual novel about a studio working on a remaster of a visual novel.

The actual story for the common route is slow moving, but it has a lot of interesting references to games and game development. Franchises like Dragon Quest are indirectly referenced with a name change and some locations in the game even have ads for Nurse Love games. I also appreciate the Fist of The North Star reference thrown in and one very popular movie that I won’t spoil that showed up towards the end of the game. Barring the main story, Yumeutsutsu Re:Master has the usual gallery for CG images and videos, voice players, music players, and multiple save support. The Switch version currently has a bug where you can’t save more when there are less than around 20 save slots left. You can fix this by overwriting older saves. The lack of a glossary is disappointing because the localisation assumes players will know certain terms from Japanese culture. I knew most of them, but many people will likely feel lost.

Since this is on Switch, it has full touchscreen support and button control support. It also supports cloud save backup through Nintendo Switch Online and I played a lot of it while switching across docked, handheld, and the Nintendo Switch Lite.

Visually, the character art and environments are gorgeous. The one area this falters is the colours used for the text boxes. I’m not a fan of how those look and adjusted them to be mostly transparent from the in-game settings. The character portraits also look a bit blurry when played docked. This isn’t an issue handheld or on the PS4 version (going by the demo I played). If you play handheld, there are no issues here.

Voice acting in Yumeutsutsu Re:Master is amazing. Every main character sounds amazing across their routes. It is only some of the side characters that sound a bit off. The music is full of some tense and upbeat songs and piano melodies that never get old. I’m not tired of the main work song even 70 hours later. As of now, the Switch version has a few issues. The opening video and some of the credits videos are only in Japanese. This is a weird bug because the trailer Degica released of the opening has the full English (text) opening. The other issue is the localisation has a few errors. These aren’t bad like some other Switch visual novels, but I noticed a handful in my time with some being pretty jarring. I’m hoping a patch can fix the video issue and the save issues.

Overall, I liked Yumeutsutsu Re:Master’s story a lot more than Nurse Love Addiction despite its pacing issues. As a complete package, the save, video, and few localisation issues hold it back. If you don’t mind a few of those, Yumeutsutsu Re:Master is easily worth your time if you enjoy long visual novels. Just be prepared to use a guide because it is a bit difficult to figure out how to get some of the endings. I didn’t expect Yumeutsutsu Re:Master to be this long, but I do not regret putting in 70 hours after seeing the story play out and have already gotten into the sequel Yumeutsutsu Re:After which I will be playing for a while now.

Yumeutsutsu Re:Master is easily worth your time with its multiple endings if you enjoy long visual novels.