previous
Need For Speed Won't Be Released Until 2015
random
next
Star Wars: Battlefront To Make Appearance At E3
0 comments 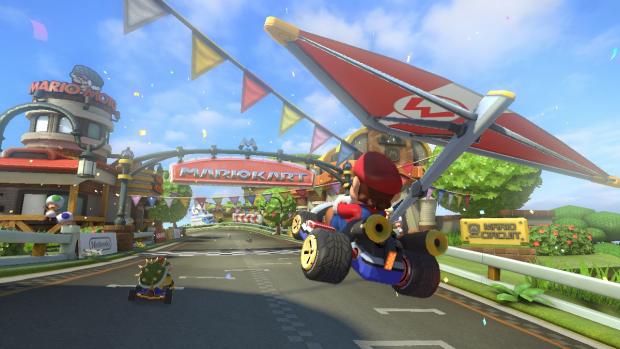 More than twenty odd years down the road, and I can still hum any one of the race themes from the original Mario Kart, as well as Soya Oka’s genius opening music, which hits you hard with its thrilling, chirpy, cartoon-like glee. Playing again recently, I was shocked at just how familiar I still am with the expertly designed tracks, the wonderfully balanced driver classes, and the perfectly implemented Battle Mode. Anyone who has the audacity to claim it is dated needs to take a long hard look at how the future of the karting genre – something Nintendo EAD undoubtedly helped create and popularise – panned out.

Even now, kart racing is an easy way to shoehorn a popular gaming character into a cheaply made throwaway game. Historically, there have been more licensed names in miniaturised vehicles than most even realise – the Muppets, Pac-Man, Sonic (whose woeful Sonic Drift was a direct response to Nintendo’s classic), even Simon Belmont, for goodness sake. If you don’t believe me, take a look at your tablet or mobile device now, and Angry Birds are there, perched in a sodding scaled down car. You see, as we approach the first ever high-def slice of Mario Kart action, that 1992 original has still yet to be truly bettered. At a push, the four-player thrills of Mario Kart 64, which for a time edged out Goldeneye in my student house of yore, is the closest Nintendo have come to their iconic SNES racer.

A valiant effort from Hideki Konno, it moved the racetracks away from the trademark Mode 7 of the N64’s predecessor and into 3D polygons, but just lacked the same impact that Mario 64 and Ocarina of Time managed to generate when they took the company icons into full three dimensions. Sure, it had undulating tracks, and the fantastic Toad’s Turnpike, but it wasn’t as tightly focused, as undeniably perfect as the game that preceded it. Other handheld renditions have been very good racing games, but are much more expansive than their inspiration, and suffer by comparison. Shaving milliseconds off your Ghost Valley time employing use of boosts, jumps, and short-cuts is the stuff of gaming legend, discovering ways to bypass sections of track, or when to use the power slide or hopping abilities to overtake a foe or dodge a projectile – these are experiences that helped forge my current gaming self. In my circle of friends, achieving a perfect run on the original Rainbow Road earned you respect.

Let’s hope that (the very pretty looking) Mario Kart 8 shows its own degree of respect to the game that has inspired it, and goes beyond offering futuristic graphics and gimmicky racetracks. It is nigh time that Mario Kart became a regular fixture in my home again.