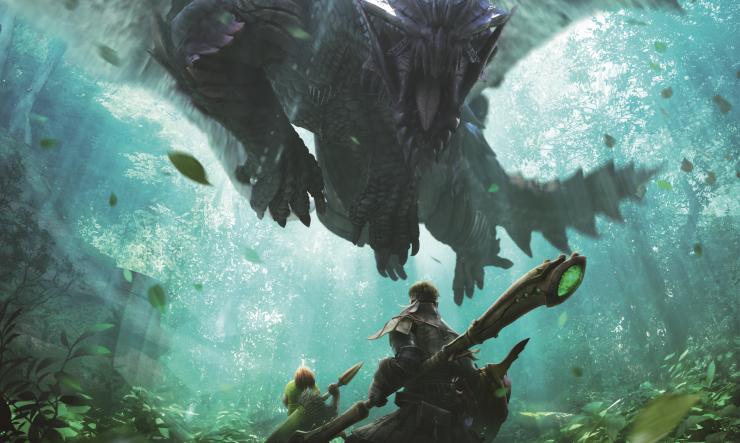 How did you jump on it’s back!? Is the usual question. It’s a squeal of genuine enthusiasm and excitement, a squeal more surprised than most you’ll hear in a typical Monster Hunter fight. Monster Hunter is traditionally a game of measured movement, careful trap placement and flat motion, but Monster Hunter 4 Ultimate gives that system an injection of verticality and spontaneity that imbues the franchise with a fresh vibe that is felt instantly from only a handful of short demo hunts.

This is the same Monster Hunter. Selecting a Long Sword I felt very much at home with my attacks, the inventory box still tempted with its goodies, I still picked up an assortment of familiar raps, potions and bombs. And of course, my objective was to kill a rather large nasty that was stomping around the zone. But this is slick Monster Hunter.

It’s still Monster Hunter because you still have to think a lot. You still need to sheath your weapon to use an item, you still need to carefully consider your placement around a beast (particularly in multiplayer), but within minutes the improvements Monster Hunter 4 Ultimate makes to movement, such as the way a hunter easily mantles a ledge even with a weapon drawn, is a minor alteration with major repercussions.

In many ways it’s the removal of some of the bad ‘hows’ that’s as important as the addition of the impressive ones, but going into details of all the minor alterations would make for a very boring article. To add a few quick examples though, I could move between my Long Sword’s attacks, including normal swings and those that use my focus meter, with far greater ease than ever before due to an appreciation of it being something I would want to do, and climbing things doesn’t paint your hunter as a wall snail. It’s all just improved playability at the end of the day, but it’s enough that newcomers will find Monster Hunter 4 Ultimate easier to get into, while old hands will find the new options liberating.

When you find the Monster it’s business as usual, and it is already proving that it will offer an interesting menagerie. The first foe we (myself and one partner) felled was a basic Great Jaggi. Merely a trifle, these raptor-like creatures are barely larger than a human and don’t put up much of a fuss. What was impressive, particularly coming straight over from Monster Hunter 3 Ultimate, was how the Great Jaggi itself was able to use the extra verticality of Monster Hunter 4 Ultimate’s areas to spice up the scrap. The Jaggi has always been agile, but watching the beast leap backwards to a higher ledge and roar down, summoning its allies and causing us to scramble for a route up towards it, is a thrill that establishes the importance and challenge that Monster Hunter 4’s more dynamic zones bring to even a basic foe.

Then things got tough. We decided to tackle the Tigerstripe Zamtrios, a new beast in Monster Hunter 4 Ultimate. This creature is a bizarre cross between a frog and a shark, with the teeth and expanding throat bubble you’d expect. Oh, and it’s about four times the size of a human, unexpanded, and a terrifying gelatinous wrecking ball when puffed up. Watching the beast move around the zone, organically placing its feet on the varying heights of terrain, is an intimidating sight, and the sort of impressive technical feat you wouldn’t think the 3DS was capable of. Elements like this render Monster Hunter 3 Ultimate’s zones flat in comparison. Well, they were largely flat anyway, but you notice just how flat they are after playing Monster Hunter 4 Ultimate. It’s the sort of sequel that makes you reluctant to return to its predecessor.

When the Zamtrios puffs up, things get really scary. He will roll and leap around the zone, and (I’m tired of singing its praises constantly, but here we go again) the extra verticality makes running away an inherently more exciting task as you have to keep check of walls that would block an escape, and take brave leaps if you’re near an edge before re-evaluating both yours and the monster’s positions.

During combat the increased amount of platforms and elements helps remove a modicum of the predictability from fights as avoiding an attack, or indeed attacking a creature, in one part of a map feels noticeably different to doing so in another. The world itself is more of a factor in Monster Hunter 4 Ultimate than it’s ever been before (did I mention a moving sand river that shifts you as you fight? Because that’s a thing), and it’s an organic improvement to combat that actually makes moving from area to area to chase a fleeing monster feel more constantly engaging. Plus, the fact that there’s more things to learn about and work with talks to the very core appeal of Monster Hunter.

Then there’s the mounting. Sheath your weapon and run off a ledge and you’ll be able to attack in mid-air, potentially grabbing on to the back of a beast. Impressive to do, exciting to see, and functional too. Tell your team to stop attacking as that makes the beast angrier (not that they should dawdle, this gives team-mates a nice breather to perform tasks such as sharpening their weapons), play the little mini-game and then you’ll topple the creature. It’s an exciting bit of drama that adds some tense spice to combat along with the empowering bravado.

The confused questions of Monster Hunter’s past are replaced with excited desires to be as cool as everyone else, to know how to do the fun things and how you should fight in this zone rather than the confusion over menial tasks that was such a barrier to many. Combine this added sense of flair with the easier, more fluid movement, and you’ve got an instantly more appealing Monster Hunter.

Yet it does all of this without sacrificing the item and monster understanding that underpinned its predecessors, instead developing this area of the game as well thanks to a more involving world itself. Knowledge is still power and effective use of traps and bombs, alongside the environment, is still the best way to take down the likes of the Tigerstripe Zamtrios. So, how you do you ‘get into’ Monster Hunter? Monster Hunter 4 Ultimate, that’s how.

If writing ability was a flavour, I would be the warming embrace of apple and cinnamon - wonderfully familiar and pleasantly spiced. Ever the optimist, I spend most of my game time diligently failing at fighting games (BlazBlue and Persona 4 Arena being the preferred titles), Monster Hunter and Dark Souls. As you can surely ascertain from such preferences I'm a gamer at my most content when a title is punishing me, abusing my feeble abilities and forcing me to improve myself in order to overcome life affirming challenges. Feel free to question my opinions and such on Twitter, @Dalagonash, or find me on every gaming network available as Dalagonash.
MORE LIKE THIS
CapcomMonster HunterMonster Hunter 4 Ultimate