Take to The Skies In Latest Set Of GTA Online Jobs 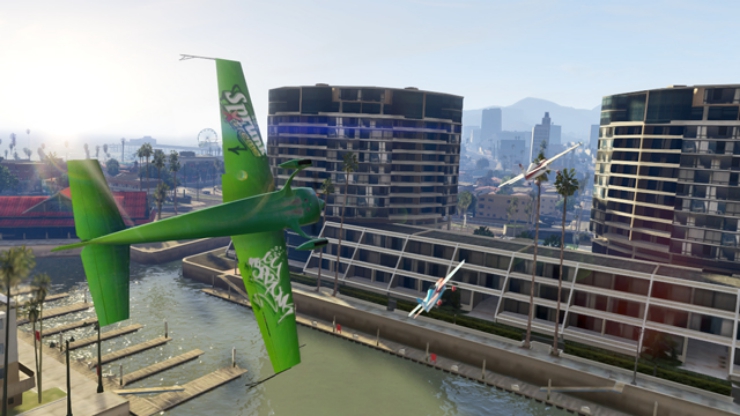 A brand new set of Rockstar verified jobs have been unleashed into GTA online on both the Xbox 360 and PS3. The collection is known as #FlightSchool Selections and features 10 air races that see players take to the skies in planes and helicopters to compete for glory.

Five of the races are from the #FlightSchool Event Weekend Creator Competition that Rockstar ran a while back. Each of the successful creators managed to pocket GTA$1M plus the AVIATOR custom license plate. Meanwhile the other five job creators get the satisfaction of having their job verified and featured on all platforms, including the Xbox One, PS4 and PC when the new versions of GTAV launch.

You can see a brief description of each of the new jobs below.

“Easy,” reads the one-word description for jjjpelo’s long loop along the  coastline, but in reality it’s anything but. The Swift is the default choice of chopper, and its maneuverability and speed make it an excellent fit. If you’re not too busy getting in the blades of your opponents, look out for great views across the city as you climb over the Land Act Dam.

The introduction of San Andreas Flight School to GTA Online has arguably increased the skill of local pilots, while at the same time encouraged greater recklessness. This creation from LoneWolfOfNorth features some of the most difficult low flying sections we have seen, to the point where we wondered if it could even be classed as flying. We think that this will be a Race that many players will come back to again and again, especially to try and beat the three-minute Lap challenge laid down in the description.

GunterDaPenguin has made the city the star of this Besra Race, a north to south tour at a time of day (hence the title) when the world beneath your wings has a stunning amber glow. Not that it’s advised to spend too long sightseeing – challenging sections weaving through wind turbines and knifing between skyscrapers should keep your attention on the stick.

Conventional logic would suggest that spinning helicopter blades and overhead power cables are rarely a good mix – but conororor has disregarded this completely and created a fun aerial slalom between pylons in the Besra. Quick reactions and close control over your plane’s rudders (L1/LB and R1/RB buttons) are a must.

This Mallard Stunt Race is as extreme as the benzene-packed drink from which it takes its name. Loops and tight turns in the skies above Vespucci Beach make for an entertaining test for the most able pilots. Non-Contact is selected by default and we recommend keeping it that way, unless mid-air collisions are your idea of a day at the beach.

The title couldn’t me more fitting in this Air Race for San Andreas Flight School graduates looking to take the Besra Training Jet for an off-curriculum cruise. The route is varied, with sections under bridges and over the crest of a mountain, and we suggest keeping the time set to morning so you can enjoy the sunrise around Raton Canyon.

This helicopter Race feels like a change from the norm right out of the gate, with players starting at the peak of Mt. Chiliad and immediately going into what is accurately described as a “near-suicidal descent”, followed by a “treetop-trimming run through Paleto Bay”.

Another challenging race in the Swift helicopter, with players starting out at the docks and working their way through downtown, squeezing between buildings and climbing to pass over the Maze Bank Tower.

This Race is pitched as a chance to put everything you’ve learned at the San Andreas Flight School to the test, and this proclamation is backed up with a series of tight turns, low flying sections and tight squeezes along its short route. The varied verticality, with some checkpoints requiring you to climb steeply and others forcing you to dive down under bridges, made the Race stand out from the rest.

Another great, high speed Jet Race with good variation. Highlights include dangerously low flying sections over the rooftops of Chumash beach houses and under bridges as you skim the water in Lago Zancudo, which are separated by a highly technical number of tight turns around the tower of the Fort Zancudo Military Base.

eSports! I joined God is a Geek all the way back in September 2013 and since then have spent most of my time on Dota 2, and occasionally posting the odd review, news article or totally wrong predictions for The International. When I am not playing Dota I can probably be seen watching some kind of strange eSport or begging for more Twitter followers (@MikeStubbsy if you are interested). Aside from GiaG I am a computing student, football coach and major Apple fanboy.
MORE LIKE THIS
Grand Theft AutoGTA OnlineRockstarRockstar North