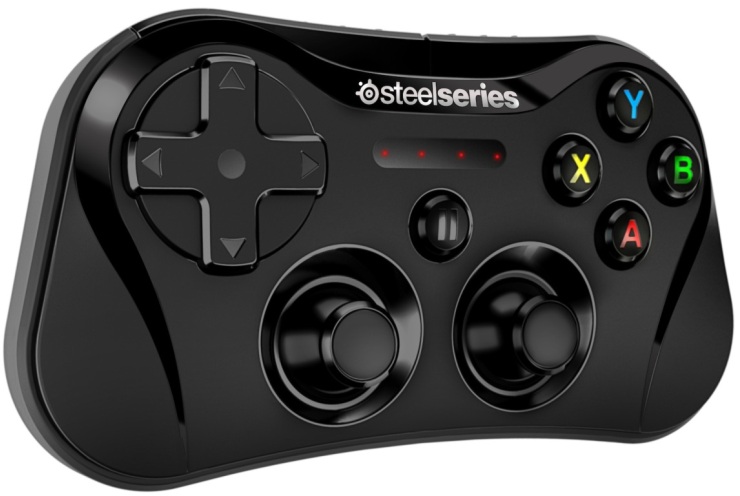 When iOS game controllers first launched I was skeptical to say the least. The majority of iOS games have great touch controls and personally I don’t find virtual buttons all that bad. However, using the SteelSeries Stratus has changed my opinion and improved the experience of many iOS games.

Once in your hand, the Stratus has a strange feel. The device is quite small; meaning those with big hands may struggle to use it effectively, but at the same time feels incredibly well built and solid. The supplied cover that can snap onto the front to protect the buttons during travel also snaps onto the back to boost the size of the device, which made it much easier to manage. On the Stratus are 4 face buttons, two analog sticks, a D-pad and 4 shoulder buttons, along with a pause button and a sync button. The D-pad is very reminiscent of the one found on the first 360 controller; it doesn’t feel great to use and is perhaps the least satisfying of all the buttons to press. The shoulder buttons have an interesting design: two are long and thin while the remaining two are short but wide. They aren’t necessarily hard to press or reach, but those of us with sausage fingers will probably end up pressing two at the same time quite often.

The face buttons are nicely spaced and feel responsive to press while the analog sticks are fairly small but still manage to feel satisfactory. They do have quite a high resistance and are very close together which may not suit some. It is worth noting that on our review unit the right analog stick had a slightly out-of-place grip, which made it have a raised edge on the right of the stick.

Connecting the controller to your iOS device is as simple as connecting any other Bluetooth device. Simply open up the Bluetooth options on your iPhone/iPad, hit the sync button on the Stratus and select the controller. Fortunately the connection is remembered so when you turn the Stratus on after initially connecting it should auto connect. I did have a few issues connecting to my iPhone 6 Plus but I think that was more down to user incompetence than an issue with the hardware.

Four LED’s appear on the front of the Stratus and show a number of things, from which player you are (apparently 4 controllers can be connected at once) to the charge level of the controller. According to SteelSeries the Stratus has a 10-hour battery life and although I didn’t time it meticulously that seems like a reasonable figure. The controller wont be disconnecting mid play session providing you charge it (via the supplied micro USB cable) every few days. As with all iOS game controllers, not all apps support them. SteelSeries does have a list over on their site but its not exactly over run with top tier titles. Bastion, Limbo and GTA San Andreas all felt great whilst using the Stratus, almost turning my iPhone into a portable console, while The Impossible Road became an entirely new challenge that is just as difficult as it is using touch.

The biggest elephant in the room regarding the Stratus is the price. Amazon is currently the cheapest option with the white version retailing at £48.44, which lets face it isn’t exactly cheap. The tech behind the device and the build quality don’t really feel like it should cost £50, which will certainly leave some disappointed.

At the end of the day the SteelSeries Stratus is a perfectly competent device that will suit anyone who wants a portable iOS controller, providing you don’t have large hands. The list of supported games and slight issues with the device itself such as the D-pad and shoulder buttons stop it from being the perfect controller. If you are desperate for an iOS controller you will probably stomach the cost, but anyone sitting on the fence may simply decide that touch controls work fine, and don’t cost £50.

eSports! I joined God is a Geek all the way back in September 2013 and since then have spent most of my time on Dota 2, and occasionally posting the odd review, news article or totally wrong predictions for The International. When I am not playing Dota I can probably be seen watching some kind of strange eSport or begging for more Twitter followers (@MikeStubbsy if you are interested). Aside from GiaG I am a computing student, football coach and major Apple fanboy.
MORE LIKE THIS
iOSSteelSeries