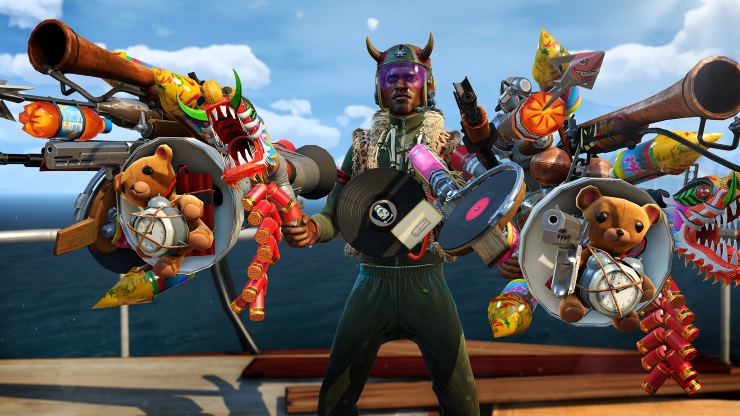 A whole host of Sunset Overdrive stuff has just been revealed by Microsoft, and it looks pretty interesting.

First up is player voting, where every other week players will get to vote on what will be included in forthcoming updates. The first vote is live now and runs for two weeks through Sunset TV. It’s between Buck National and Floyd. Whichever character wins will have their outfit made available to players as a free preset.

Next is the news that the hard to get Propain Launcher has had its drop rate increased, making it more likely for you to stumble upon this hard to get weapon.
The first weapons DLC pack has been announced, for £3.99 you can gain access to:

Plague Bomb – Instantly intoxicate enemies in the area with this weapon. Enemies hit with the Plague Bomb will start vomiting, take damage over time and explode when killed. Plus, enemies affected by the Plague Bomb can spread the disease to others!
Rager – Releases a confusion-inducing cloud which causes enemies to attack each other in a fit of rage. And yes, they also explode when killed.
Shield Buddy – Activates a shield that protects you and your friends but also deploys bombs that will decimate your foes. No need to choose between offence and defence when you can have both with the Shield Buddy.
Multi-Lock Rocket Launcher – The most literal of the weapons included in the pack, the Multi-Lock Rocket Launcher does exactly that and locks on up to eight targets. Release the trigger and send a legion of homing rockets at your enemies.

A ‘Best of’ Soundtrack has been released. Now you can listen to your favourite Sunset Overdrive music tracks away from your Xbox One with The Best of Sunset Overdrive Music on iTunes for £11.99 and also available on Spotify and other music services.

And finally, from now until the 2nd of December you can earn 27.9 times more Overcharge than normal whole playing Chaos Squad. That should make it easier for you to get what you need for those much sought after upgrades.

Well, if that’s not a good content drop then I don’t know what is. Enjoy!

A lover, not a fighter and an all round good guy (he would say that, he wrote this after all), he's happy to be here as part of GIAG.
MORE LIKE THIS
Insomniac GamesMicrosoftSunset OverdriveXbox One