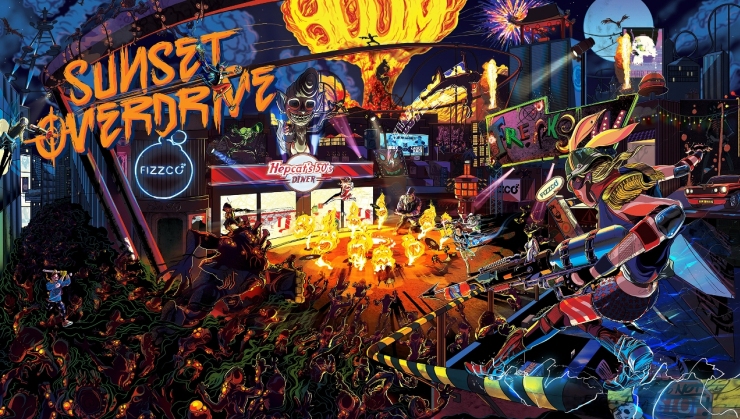 Remember when games were fun? Insomniac do. Although, to be fair, that’s mainly because they’ve always clung onto that element during the development of their games – sometimes to the detriment of the overall quality. Ratchet & Clank is a notoriously hit and miss franchise; almost every entry is undoubtedly fun, but very few have reached the heady heights of, say, A Crack in Time in terms of quality. Most recent Insomniac offering Fuse underperformed, despite a decent campaign and a slant towards bonkers four-player co-op. But they’ve been waiting to find their niche, that gap in the market that only they could fill, an opportunity to not only rise back to the top, but to become relevant again.

Very few developers are able to truly leave their mark on a game. While we have to pause and think to remember who developed this year’s iteration of Call of Duty, and big publishing outfits like 2K and Ubisoft have multiple global in-house dev teams, there aren’t many games that broadcast their maker’s identity like an Insomniac game. They have hallmarks that stand out a mile away: bright, cartoonish visuals, genuine, unforced humour and off-the-wall arsenals. It’s why, no matter the metacritic scores they garner, they remain one of my favourite developers.

Sunset Overdrive positively screams “Insomniac!” at you with every silly gun, every tongue-in-cheek gag and every inch of its technicolour world. Not much will make me use terms like “zany” and “eye-popping”, but Sunset Overdrive does. The story is nonsense: a mutated energy drink has turned the douchebag citizens of Sunset City into ravenous monsters called the OD. As one of the few who didn’t partake of the brew during its obnoxiously over the top launch party, you find yourself trying to survive in a city going to hell, as FizzCo. take drastic steps to cover up their mistake and wall-up Sunset City, rolling in the robots to wipe out the evidence.

So far so zombie game, right? Well, no actually. See, Sunset Overdrive knows what it is. Like, really knows. It’s utterly self-aware; hell, it revels in the fact that it’s a game, reminding you at every available opportunity that the rules of the real world don’t apply. Your protagonist is a blank cipher, with a universal personality no matter how you make them, dress them or conduct their behaviour, and the onus isn’t placed only on surviving, but on surviving with style.

Grinding rails, bouncing off cars, swinging from high-wires, air-boosting and double-jumping, even water-surfing on your own two feet, Sunset Overdrive seems to frown upon the very concept of walking around. The more tricks you chain together, the higher your style meter climbs, and it’s your style meter that activates Amps. These temporary perks feed back into the relentless loop of mayhem and madness that drives Insomniac’s game, triggering in stages to deliver boosts like melee swings that launch fireballs and evasive rolls that damage your enemies. Kills and tricks splash numbers up and down the screen as your combos climb, and the faster you go the more insane it gets. When Sunset Overdrive was shown at E3 this year, I immediately thought (and wrote, natch) that this could be the shooter to save its bloated, over-wrought genre – and in many ways, it is. In an industry dominated by military shooters and lofty space operas, Sunset Overdrive stands out like a big, swirling, cursing beacon of noise and colour. It’s a sad state of affairs these days that setting out to make a game that prioritises fun is considered a risky venture, but that’s what Insomniac did – and they succeeded. More than that, though, they’ve created something that’s increasingly only found in the indie domain: Sunset Overdrive is a unique AAA. Remember those?

Perhaps most importantly, it may even be a bit of a system seller that will help boost sales for the Xbox One. I know of two others besides myself who bought Microsoft’s console just to play Sunset Overdrive, which bodes well for a fledgling franchise. If you own an Xbox One, I’d go so far as to say that Insomniac’s game is a must-play. It might not change the way we look at games, but it will certainly remind you why you started gaming in the first place: for fun, above all else. So strap on a pair, grab your explosive teddy-bear launcher, puff up your multicoloured afro and go nuts in Sunset City. Life’s too short to sit it out.

Read our original Sunset Overdrive review.
Liked it? Take a second to support GodisaGeek.com on Patreon!

Senior Content Editor Mick has been playing games for over 30 years and writing about them for around 12. After drifting from site to site for a while, settling briefly at the now-defunct Made2Game and freelancing for the gone-but-not-forgotten NintendoGamer Magazine, he came at last to rest at Godisageek. Mick has been a reviewer, staff writer and content editor here for some time, while also moonlighting a little for Red Bull Games. He has 4 kids, has written 2 novels, and sometimes even manages to pay a bill or two. You'll usually find him defending the galaxy in Destiny 2, battling evil in Diablo 3, or lurking in the background on Twitter. Find him there @Jedi_Beats_Tank, or on XBL (JediWaster247), PSN (Jedi_Waster) or Nintendo (JediWaster).
MORE LIKE THIS
Insomniac GamesSunset Overdrive