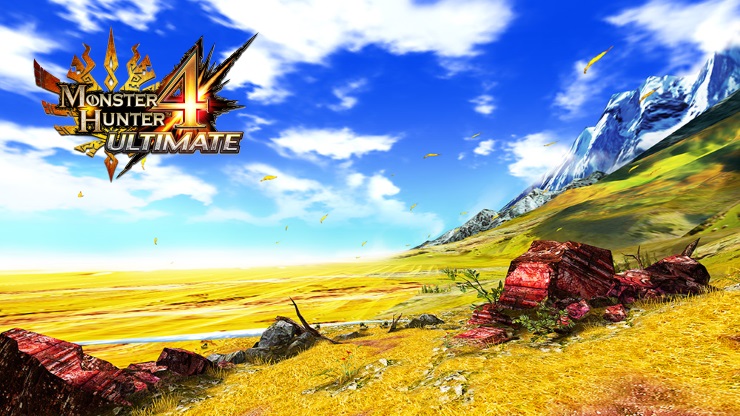 The hardest part of Monster Hunter as a franchise has always been in selling its progression to other would-be hunters. The grandeur of fighting gigantic mutated dinosaurs always seems worlds away when you’re stuck roasting meat and struggling to drop a beast only a mite bigger than a velociraptor. Previous Monster Hunter games haven’t so much made themselves up-hill climbs as much as treacherous, soul destroying mountain death-climbs. Put simply Monster Hunter games (as incredible as they can be) rarely do a good job of drawing the player in. The first thing that happens in Monster Hunter 4 Ultimate is a fight against a massive Moh’ran, one of the game’s largest beasts. Want to know what it feels like to tumble with one of the game’s later bosses? Want to get a feel for movement? Want to see what your humble little 3DS is truly capable of? This fight is a whirlwind of an introduction and is exactly how you impress the scope and impact of this series upon new players, as well as simultaneously reminding old hands of the joys they once felt. It’s huge, it’s impressive, and if this were the first page of a book then you’d be snuggling in with a steaming cup of your favourite heated beverage for an afternoon marathon because the words were just that exhilarating.

Then you start the game properly and it’s largely business as usual. Thing is, the appeal of the series is there within the first ten minutes, in a safe environment. Want to give someone a feel for the franchise? Hand them a fresh copy of Monster Hunter 4 Ultimate. What’s more, after the initial handful of quests there are optional weapon tutorial missions that explain the focus and controls of each weapon in a safe environment instead of hiding them away in the options, another thing that will make wading into the world of Monster Hunter that little bit smoother for greenhorns.

Yet, what accounts for business as usual here is also much stronger, narratively speaking, than previous titles. You’re hired by ‘The Big C Caravan’ as their personal hunter, alongside a blacksmith, cook, merchant, and guild clerk, and each ‘chapter’ of the story impresses a greater deal of importance to both your hunts and the monsters themselves than previous titles have. Alongside genuine set-piece levels every plot hunt has an obvious purpose, relayed through amusingly written text that emphasizes why you’re hunting what you’re hunting, and this helps grease the 15-20 hour initial tale as it moves towards its grander goal of discovering the origin of an item in the Caravan leader’s possession (there’s a completely different narrative that kicks in after this is found that increases the solo game time dramatically, and this is before even considering touching multiplayer).

Needless to say, Monster Hunter 4 Ultimate’s single player experience is substantially more involving than Monster Hunter 3 Ultimate’s endless blame game while also serving the essential purpose of setting up a lot of the game’s additional systems and components as you move through it, such as item exchanging through the merchant, StreetPass functions, and the ability to recruit a whole army of Palicoes – the customisable cat-like followers that help you on missions (you can only take two with you, but their abilities are widely varied so you’ll want a lot of them to choose between). This isn’t to say that Monster Hunter 4 Ultimate’s single player is easy. While I personally felt that overall Monster health had been reduced and there isn’t such a reliance on weapon and armour upgrades (I can muddle through with one Insect Glaive upgrade and by creating only two new sets of armour), creatures are still incredibly aggressive, you still need to hunt and chase them around huge sprawling stages, and brainless play will be punished as the usual parameters apply – mission failure comes after three ‘deaths’ or 50 minutes without achieving your objective.

With that said, the combination of slightly weaker monsters alongside less obnoxious environment traversal and more exciting combat options (as covered in our previous Monster Hunter 4 Ultimate preview) will both work to help ‘get’ players into the series. Less getting stuck wailing on that first Great Jaggi for three hours, wondering where his health bar is and why he isn’t dying; more having fun working out and carving through Monster Hunter 4 Ultimate’s refreshingly varied menagerie. In the initial story alone you’ll fight everything from a bi-pedal dinosaur to a mushroom chomping ape to an inflatable shark-frog to a huge spider to a dragon-like creature to a massive snake, it’s remarkable how many different types of monster you’ll encounter, which is another huge improvement over Monster Hunter 3 Ultimate.

Monster Hunter 4 Ultimate doesn’t appear to be a huge overhaul of the franchise, nor is it a betrayal of the core values of knowledge, pre-planning, and educated decision making. It is, however, both a logical evolution in terms of movement and environmental design, as well as being the most outwardly appealing and rewarding Monster Hunter when taken at a purely presentational level. This is key, as presentation can often be the single most important value when it comes to establishing the initial appeal of a game with the player, and with the initial appeal established, the gameplay roots can then start to take hold. If you’ve ever been interested in the series and wanted to know a good place to start, this is it. Monster Hunter 4 Ultimate, I’m pleased to say, bucks series tradition by doing a good job of drawing the player in.

Preview code supplied by publisher.
Liked it? Take a second to support GodisaGeek.com on Patreon!

If writing ability was a flavour, I would be the warming embrace of apple and cinnamon - wonderfully familiar and pleasantly spiced. Ever the optimist, I spend most of my game time diligently failing at fighting games (BlazBlue and Persona 4 Arena being the preferred titles), Monster Hunter and Dark Souls. As you can surely ascertain from such preferences I'm a gamer at my most content when a title is punishing me, abusing my feeble abilities and forcing me to improve myself in order to overcome life affirming challenges. Feel free to question my opinions and such on Twitter, @Dalagonash, or find me on every gaming network available as Dalagonash.
MORE LIKE THIS
CapcomMonster HunterMonster Hunter 4 Ultimate