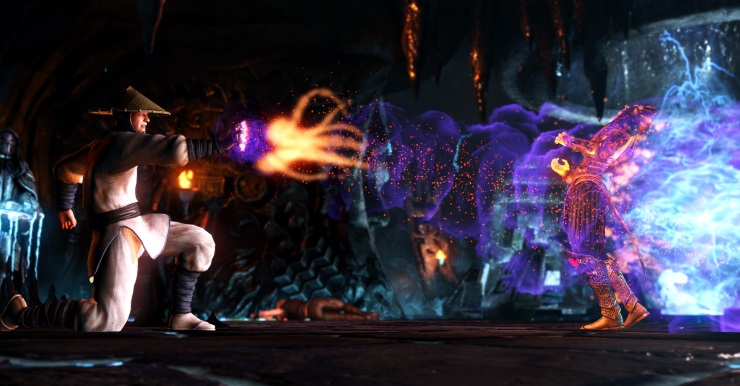 In the interest of being complete honest, aside from Smash Brothers, I wouldn’t consider myself a fighting game expert. So when I sat down to play some Mortal Kombat X at a recent Warner Bros. hosted preview event, I wasn’t entirely sure what to expect. It was a happy surprise, then, that it took mere minutes before I was pulling off combos and special moves. MKX makes you feel like a badass from the get go, and that’s a very good thing.

Combat is sleek and satisfying. Like the rest of the series, X relies on a few basic attacks (mapped to the four face buttons and the shoulders) for the foundation of the combo system. Fights become a dance between you and your opponent; each attack weighty and subtly changing the momentum of things. The environmental interactions from Injustice: Gods Among Us have been brought over as well, meaning spatial awareness is a must if you want to avoid being slammed into a statue. As you would expect, it’s brutal and brilliant, characters getting bloodied and bruised as fights progress. Each character fights in a different way, some quicker with longer ranged attacks, others slower but deadly up close. As if the roster wasn’t full enough (containing fan favourites like Johnny Cage alongside new protagonists/antagonists such as the insect-like D’Vorah), each character has three different variations, granting a handful of new attacks. Scorpion can have dual swords or fiery special moves, while the aforementioned D’Vorah can call on a swarm of insects or spurt acid. From my limited hands-on time they didn’t seem to make that much difference, but once the game is released I’m sure everyone will gravitate to their favourite.

Solid combat would be nothing without plenty of modes to play with, and from the look of it, MKX has you covered. Story mode takes pride of place, with NetherRealm aiming for a movie-like feel again. Following on from Mortal Kombat 9, MKX takes place 25 years in the future. The story is told through cutscenes which then blend almost seamlessly into a fight. It’s neat and (again) very slick, although there was a quick time event fight I saw where I would rather have just watched a cool fight scene.

Once you’ve exhausted the story, NetherRealm’s attempt to keep you playing is the new Living Towers mode. An evolution of the MK9’s Challenge Tower, Living Towers regularly updates the parameter’s of its challenges, with a Quick tower that changes every hour, a Daily Tower that will change every day, and Premier towers for special events. Each will have different modifiers, such as acid rain, or quick recovery from a certain attack. The theory’s pretty sound, and if they can pull it off it could prove as addictive as Destiny’s Daily and Weekly Strikes. Other modes are being kept under wraps so far – single fight was the only other one on the menu screen of the build I played – but NetherRealm promise that there are more to come.

All of the modes will tie into the Factions Wars metagame, which has you affiliate yourself with one of five factions: Black Dragon, the Brotherhood of Shadow, the Lin Kuei, Special Forces, or White Lotus. You’ll earn points for your faction in every mode in the game, with all players on every platform competing for their chosen faction on a single leaderboard. If your faction is the winner at the end of the week, you’ll get a faction specific reward, that we’ve yet to see revealed.

NetherRealm are quite keen on cross-platform inter-connectivity, with the mobile version of the game linking up with its bigger brother no matter what platform you have it on. Unlock something in one version and it’ll appear instantly on the other, although (again) what these unlocks might be is being kept under wraps for now. Mortal Kombat X is quite the looker as well. Characters are incredibly detailed, while the stages are dynamic, with destructible portions and movement in the background. In story mode, there is a slight drop in quality between cutscenes and gameplay, though it’s only noticeable because of the quick transition between the two.

It would be easy to say that this is just more Mortal Kombat, but it feels like more than that. With the new Living Towers mode and the persistent Factions War, it feels like NetherRealm has built a game designed to keep you coming back to it, provided the rewards for doing so are right. The inclusion of another proper single-player story, where you’ll switch between characters, feels like a departure from regular fighting games whose campaigns are little more than a string of single-fights – which is a good thing. That all of this is underpinned by solid combat that easy to pick up but no doubt incredibly deep means that things are looking good for Mortal Kombat X.

You can find me on Twitter and PSN as MacShanks, and feel free to hit me up if you have any questions, queries or feedback!
MORE LIKE THIS
mortal kombatMortal Kombat XNetherRealm Studioswarner bros