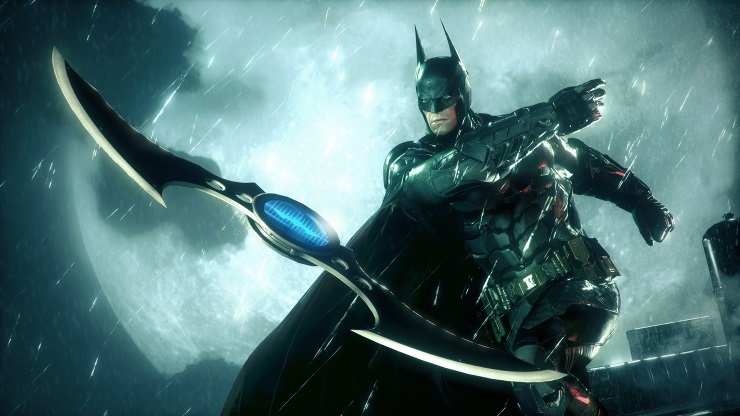 Recently, I got the chance to have some hands-on time with Arkham Knight, and straight afterwards I was whisked away to have a chat with Gaz Deaves, Social Marketing Manager at Rocksteady games. My first question – as I’m sure many of you want to know – is why they decided to include the Batmobile after three games.

“When we started to create the epic conclusion to our Arkham trilogy we really wanted to go out with a bang and make sure that there was a really cool, innovative, very new strand to the gameplay to add to that Dark Knight experience, and the kind of the obvious thing for us to do was say: what does the Batmobile look like in the Arkham universe?”

“Our Batman continuity is completely separate from everyone else’s. We have some of the same themes – Gotham city is there, Batman is there, Alfred is there – but they’re our own versions of those and those need to make sense both in the context of the previous games but also it needs to work as a game. So having this massive, all-terrain, unstoppable wrecking ball driving around the streets of Gotham, I think, feels incredible, it really ties into that power fantasy of being the most powerful man in Gotham, being the Batman” Adding the Batmobile into the series hasn’t been the easiest experience for the developers though, requiring quite a large re-working of the level design.

“I remember talking to (Rocksteady Co-Founder) Sefton Hill quite early in the project, and he said when the decided they wanted to put the Batmobile in one of the first things they did was say ‘lets make a Batmobile and put it in Arkham City, as we’ve got the existing lay-out there.’ So there were tech demos that were done there and we realised that because Arkham City had been designed for Batman to navigate on foot and to glide around all the streets had really sharp corners and were really narrow, and it wasn’t much fun to navigate in, so one of the things we realised when we decided we wanted to put the Batmobile in was that Gotham would need to be a lot bigger.

“The area that we’ve just shown here is about the size of Arkham City itself, and that’s just one island; and we’ve got two more islands plus a load of massive interior environments for you to explore. It’s a much bigger game and we didn’t make it bigger for the sake of it. I don’t think anyone thought Arkham City was a small game – but we partly made it so much bigger because we wanted the Batmobile in it to feel awesome and for it to be a really meaningful experience to drive around Gotham to have that kind of Batman experience available as well.” While the game world has been scaled up considerably,the amount of on screen enemies has also been dramatically increased. Happily it hasn’t come at the expense of the excellent combat system.

“The Dual Play combat is one of our big combat innovations in there. So while you’re fighting you’ve got an AI companion you can switch between at will whose also attacking thugs and dealing with them. The freeflow combat has always been very scalable, and I think some of it is at its best – and most fun – when you’re dealing with big groups of thugs; that’s one of my favourite things about this game. It’s been made possible by us making this jump up to new-gen, having that extra processing power to put more thugs on screen, way more than we ever did in Arkham City, and to do those big fights. I think that Penguin weapon cache section [played in the hands on] is awesome because it’s pure chaos, it feels like a really awesome, classic Batman brawl with two of my favourite characters in it, and I grin like a little kid ever time I think about it.”

The new Dual Play mechanic see you team up with Batman’s allies, and is perhaps the largest change to a combat system that has been in place since the first game. It only crops up at certain points, however. “We’ve got storylines that follow Batman’s various allies, so for example Nightwing is tracking down Penguin. Nightwing is responsible for Blood Haven, that’s his turf, but he’s come to Gotham because Penguin has been stockpiling weapons in Blood Haven and Nightwing wants to stop the flow, so him and Batman are working together on that. Gotham is Batman’s turf, but him and Nightwing are happy to work together to deal with the mutual threat in this situation. So Nightwing will contact Batman and say ‘I’ve found another weapon cache, I need you to come and meet me here’ they’ll meet up, deal with the threat and then Batman will carry on with his main mission while Nightwing will go off and search for other elements of his key mission.”

One element of the series that has always been popular are the side-mission, not least the Riddler trophies. Given the Riddler racetracks that have been shown off – demented circuits of increasing difficulty – I wondered if these came at the expense of more traditional challenges.

“There are actually Riddler trophies in this demo, though I haven’t seen anyone find them yet, but they are in there. The Riddler is a great character to write for because he works really well and he creates interesting gameplay almost by just existing. One of the great things about the Riddler racetracks is that he’s fixated by the Batmobile, he sees it as a new puzzle for him, something he can solve and workout to find it’s weaknesses. He has built these really elaborate racetracks in typical Riddler style and filled them analytics, looking at the telemetry of the Batmobile and working out what it’s capable of so he can construct the ultimate tool to destroy it.” “Riddler does a lot of talking as well, and that’s a really nice thing about his character. He sort of goes off on these really long monologs about how he is so much smarter than Batman, and I think our dialogue guys had so much fun writing that as well.”

I was impressed during my hands-on with the seamless integration (check out how many times me and Adam use the word ‘slick’ to describe the game in this video) between interior and exterior locations. Apparently this has been a key design philosophy for Rocksteady.

“We don’t want to interrupt the flow of players inhabiting the skin of Batman, so it’s really important to us that the transition from exterior to interior is seamless and vice-versa. Likewise with the transitions between gameplay and cut-scenes, all of our cut-scenes are in-engine this time around, and that’s a really important thing for us. We don’t want to create things that get in the way between the player and having that cowl on – when you pick the controller up you are the Batman and that’s an important part of our design philosophy.”

And finally I asked the Ketchup question, and it seems that it can cause marital disharmony.

“Actually it’s a point of contention between my wife and me, I’m fridge, she’s cupboard. So if she’s had it last it’s in the cupboard, if I have it’s in the fridge, which is a recipe for domestic nightmares.”

Thanks to Gaz for his time.

You can find me on Twitter and PSN as MacShanks, and feel free to hit me up if you have any questions, queries or feedback!
MORE LIKE THIS
BatmanBatman: Arkham Knightrocksteady studioswarner bros