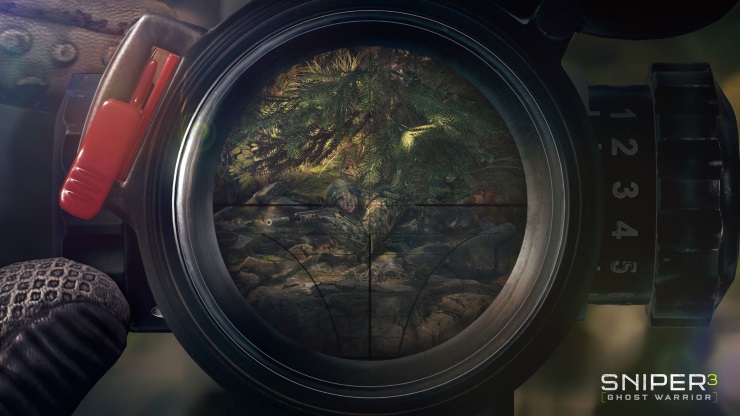 In SGW3, you are an American special forces operative illegally behind enemy lines in the country of Georgia. In a scenario that echoes current day Ukraine, the U.S. and NATO are fighting a proxy war against the Russians using the civil war in Georgia to do so. Accordingly, SGW3 is an open world experience spread across the Georgian countryside and driven by a non-linear narrative.

The demo the team showed at E3 takes place about a third of the way through the game. At the start of the demo quickly demonstrated two of the game’s central features: extreme navigation and scout mode.

After tracking through a minefield, the dev climbed into his safe house, a cave hidden in the side of the mountain. The safe house is where players can craft new items and weapons, fast-travel to other safe houses they have discovered throughout the large map, or acquire new missions. Players can also change their load outs here. The game features handguns, machine guns, a ton of rifles, knives, and drones, among other gadgets. Having acquired a mission to assassinate a Russian general, the dev then fast-traveled to a different safe house location and ventured forth back into the world. An intense rainstorm and a night sky greeted him, showcasing the game’s dynamic weather and day/night cycle.

The game is striving for a very tactical, slower-paced shooter experience. It rewards careful planning and patience and heavily punishes brash, thoughtless actions. In fact, if any enemy spots the player, he or she instantly fails the mission.

To make sure players get better at moving stealthily through the environment, SGW3 features player progression but eschews a leveling system. However, when I asked if he could clarify this point, Lebow said that the progression system is, ironically, still in progress. Indeed, the development team is still deciding how they will be implementing the various performance upgrades.

“For example,” Lebow says, “when you’re disarming the mines, right now you just walk up and hold X. Well, there will be some sort of mini game there that will have some challenge, and it might slow down and make it easier for you.”

Back in the demo, in an effort to extract intel on the Russian general, the dev steadily crept toward a guarded Russian outpost. Once outside of the compound, the dev then used his riflescope to tag dozens of armed sentries strewn about the complex, including an enemy sniper on the roof. Since the dev had to use his drone to reach and hack a security camera server, he had to take out the rooftop sniper first in order to clear the path.

Sniping in the game is complex and should please those who get a kick out of real world physics. Players have to account for distance, wind direction and speed, temperature, humidity, and the magnification of the scope. Players also need to choose the correct stance to stabilize their gun barrel, and tune their scopes to the particular environment elements. It makes every long-range shot a mathematical formula. Tactical. Exact. Clinical. All things fans of the series will no doubt love.

Having dispatched the rooftop sniper, the dev then navigated his drone over the building and down to a shed containing the security camera servers. While this sounds easy, if any enemy soldier spots the drone, the mission is automatically failed and the player’s drone stands a large chance of being destroyed, leaving the player without an eye in the sky until he or she can gather enough materials to construct another.

However, the dev playing managed to gain access to the servers and locate the wayward Russian general. At this point, the game suggests several potential sniping positions across the map that might be ideal for dispatching the mission target. While closer positions might provide easier shots, they also increase the chances of being discovered. To show his skills, the dev playing chose the sniping position farthest from the general.

If players spend time tracking the general, they might be able to find even better situations in which to assassinate him, like when he is alone or accompanied by relatively little military personnel. In this case, though, we wanted to take care of business as fast as possible.

Unfortunately, the sniper position the dev wanted to was currently occupied by another enemy sniper and his spotter. No problem here. The dev snuck up behind both and knifed them silently from behind. Once the enemies were dispatched, the dev took position, zoomed in on the general, accounted for all the right environmental factors, and took the shot. Boom.

Alarms immediately sounded once the general fell to the ground. And despite being a few hundred meters away, helicopters soon buzzed to the dev’s location and enemy fire whizzed by overhead. In the actual game, this will be the point when players have to escape on their own, but in the demo a friendly chopper arrived serendipitously to whisk the dev away, his mission complete.