previous
How to fix the problems with Splatoon
random
next
$298,135 1m Viewers and 2000 Balloons; The Numbers Of ESL One Frankfurt
6 comments

Playing F1 2015 Gave me a Taste for Speed and Drama 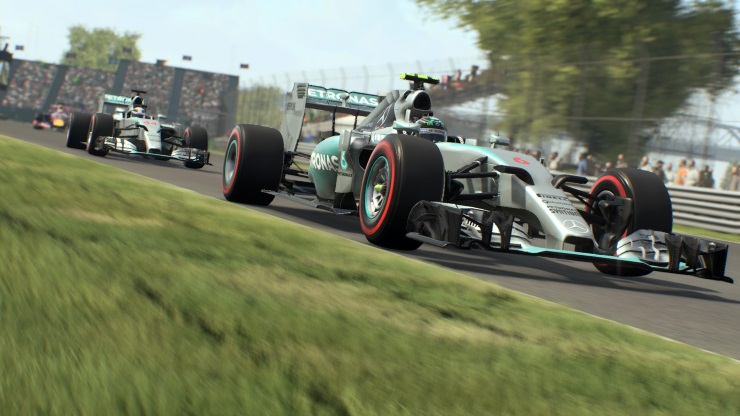 I had only one lap to go. I was ahead of a train of cars, mincing around the bend of the Gilles Villeneuve with Kimi Räikkönen at my heels. I was going to be third, but it didn’t matter. I was nearly there, I was going to finally see the champagne sequence and see myself (okay, Lewis Hamilton) serenaded in bubbly, but I guess Codemasters has done a great job with the AI.

Lee Mather, principle developer at Codemasters, is quick to explain why: “We’ve got an entire new AI system put in, as well with the new engine but also one of the main benefits of the new consoles is that they have more memory. So the drivers know more they have the confidence and the skills, they know what’s happening around them and they’ve been trained to deal with it. So they’re not going to concede, people were complaining that they could just outbrake them and cut up the AI and they weren’t going to come back.”

I was overtaken by Sebastian Vettel and in an act of either bravery or insanity, he slowed down, he made me stop and in turn made Räikkönen overtake me and bomb down the straight. I could only sit there; in my virtual circuit, in my virtual car, with my quite real shock, seeing team Ferrari ride into the sunset with my third place. It’s a good thing the sound design is top notch, it helped soothe my anguish as I later plummeted into the barrier, the mesmerising sound of the engine as it purrs and roars and the gravel crackling under your tires, at least I had a nice soundtrack to accompany my doom. My experience was somewhat marred with a glitch or two, and though I’m sure these creases will be ironed out before release or with subsequent patches, I wouldn’t let some relatively minor glitches ruin it for you; this game is tight, fun and beautiful.

“It’s not just about the on track experience, which we’ve concentrated on heavily, it’s about the beautiful environments, we can showcase with the cameras which are absolutely stunning the environments which are of just such high quality. It’s like watching a live TV broadcast. We’ve also done the commentators for the weekend race, which can talk about the track, and the races before and the drivers.”, Lee continues, “It’s like we literally put you in the driver seat and take you through the championship. In a way that there is a story being built – which as you know there is always a story in the F1.”

The F1 games have taken a lot of criticism in the past years, but it appears Codemasters has taken it on the chin and turned a new leaf, and proof is in the new engine they designed for the game, which accommodates the physics and the immersion necessary for the experience. Immersion and the off track experience sound like buzz-words, but so far it genuinely feels like they may not be all talk, though it does seem a shame that there’s no career mode.

“There are multiple reasons as with anything, and with the career mode we thought it was getting a little stale, it’s something we’ll revisit at some point. We want to do it but we want to make it absolutely awesome, when career comes back, it’ll come back with an absolute bang. Another thing is that with this new generation of Consoles we want to make fresh game. We’ve concentrated on getting everything in this game exactly right, you know so you can have a really tight experience. And it’s given us a really good start on this generation of Consoles and we can build on this quite easily now.” I can’t describe the face I pulled when I was pushed into the garage by the mo-capped pit crew. I recall playing a lot of practice and qualifier sessions so I could enjoy the sight of my own crew at my beck and call. With a mere gesture an iPad is placed in my hand acting as a real time menu. If I was going to lose the race it would be my own fault, I literally had all the information required at my fingertips. But the game also has another little charm, voice recognition, the ability to verbally abuse your engineer. Lee again: “There’s been an update across the consoles and PlayStation is up there with Xbox [in terms of the voice recognition]. It works at least 95% of the time. I’ve got a Brummy accent and it works for me pretty much all the time. One of the guys in the studio speaks loads of languages and he sits there speaking whatever and it’s amazing, it works for him.”

Another key word of the day was “parity”, the feature works on both PS4 and Xbox One, and I personally couldn’t see much difference between the two, so the PS4 and Xbox fans can lower their weapons because there’s plenty of F1 on both Consoles; and PC in case anyone’s interested. And despite lots of racing games coming from Codemasters right now, is F1 still the jewel in the crown? “F1 is definitely a Halo product for us, we most definitely are proud to have the licence but obviously we are proud of many of our other games, Dirt, Overlord the Battle Deck coming out.” On that note, how has development been for the new game. The engine is completely new, after all… “There are obviously elements that we bring over, but the vast majority is new. There’s elements and discussion talked about the tail end of 2012, we always wanted to put a game out by 2014 but there was no way we were going to rush out this game. We always planned to bring out the last of the last gen games by 2014.”

Playing F1 2015 gave me a taste of something else. I was fascinated by the game, the speeds and the small dramas that happen as I overtake another car at 220kmh. I didn’t win at all during the whole day, but when I buy this game (and I will be doing so), maybe I’ll have an easier time after a bit of practice, as it’s not an easy game. I the game a love-song for the veterans, or something for the newcomers? “It’s always difficult to make an easy game out of a sport like F1, but this game I believe hits a bigger range than anything we’ve ever done before. After a few laps most people can get the hang of the ABS and the traction control which is much better here than in anything else we’ve done. But there’s also the pro season which can make your eyes bleed as to how hard it is, so it’s really for the true Hardcore.”