The Technomancer Looks Incredible, But I Still Don’t Know What It Is 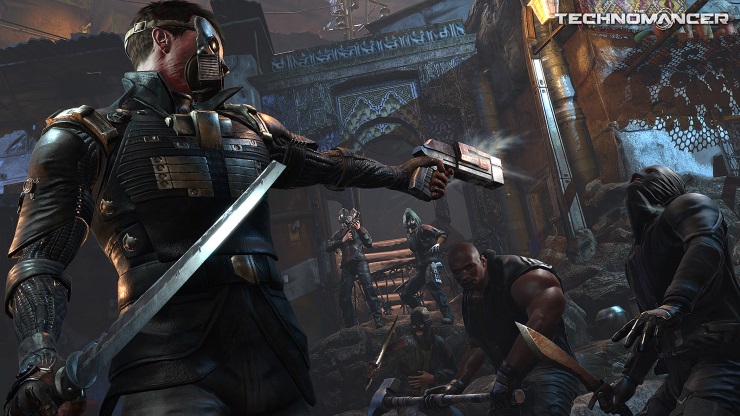 Whenever a new game is announced and everyone is incredibly hyped for it, I’m usually that guy who says “we haven’t seen gameplay” or “we don’t know how well it plays”, and once again I found myself saying this to a couple of random journalists after being shown The Technomancer at the Focus Home booth at E3.

We were shown around 15 minutes of hands-off gameplay and boy did it look great. Despite apparently being in a incredibly early alpha state the game looked visually stunning, up there with the big hitters such as Star Wars Battlefront and Need for Speed. The Martian landscape actually didn’t look too dissimilar to that of Red Faction, although there were fewer large metal buildings.

The basic plot is that your character (Zachariah) has completed their training and is about to become a full Technomancer, although the wider plot is based around a war for the remaining water on a colony planet that has lost contact with Earth. In order to complete the training, Zachariah must know the secret of the Technomancers, which is guarded as though its very revelation would bring the Technomancer way of life to an end. We didn’t get too much in the way of story details, which is to be expected for a massive RPG that’s still a long way off launching. What we did get to see, however, was some of the combat. There are three main combat options, a sword and pistol for quicker and ranged attacks, a mace and shield for the slower but harder hitting melee attacks, and the most interesting of the three, the bo staff, which basically combines the two previous versions and looks as cool as.

Despite the early alpha state the combat looked reasonably fluid and seemed to be working well. It’s certainly more in line with the combat from The Witcher 3 than Arkham Knight, although looked impressive with the Technomancers’ electric powers lighting up the fights. The occasional use of stealth to take down unsuspecting enemies to thin the crowd could, if expanded upon, add another way to play.

Unfortunately, it doesn’t appear to bring that many new ideas to the RPG genre; sure, the location hasn’t been over used and the electric powers add a little bit of uniqueness, but it all looked very safe, with no unique killer features. Maybe they have something hidden up their sleeve, but I guess we will have to wait to find out.

Sticking with the traditional RPG elements, there’s a wealth of skills across four main trees that you’ll be able to unlock to specialize in certain areas, while the crafting options will allow you to upgrade weapons and clothing among other things, again all standard RPG fare, along with what looked to be a traditional RPG quest system.

I would love to be able to tell you more, but alas this was a hands-off demo (a condensed version of which you can see above. We’ll know a lot more about this once people start to get hands on. If the combat doesn’t feel good or the controls are slightly off, or if the story or world is lacking, then this will probably be another mediocre RPG from the company that seems to specialize in them. However, if they get everything right it could be bloody brilliant.

eSports! I joined God is a Geek all the way back in September 2013 and since then have spent most of my time on Dota 2, and occasionally posting the odd review, news article or totally wrong predictions for The International. When I am not playing Dota I can probably be seen watching some kind of strange eSport or begging for more Twitter followers (@MikeStubbsy if you are interested). Aside from GiaG I am a computing student, football coach and major Apple fanboy.
MORE LIKE THIS
Focus Home Interactivethe technomancer