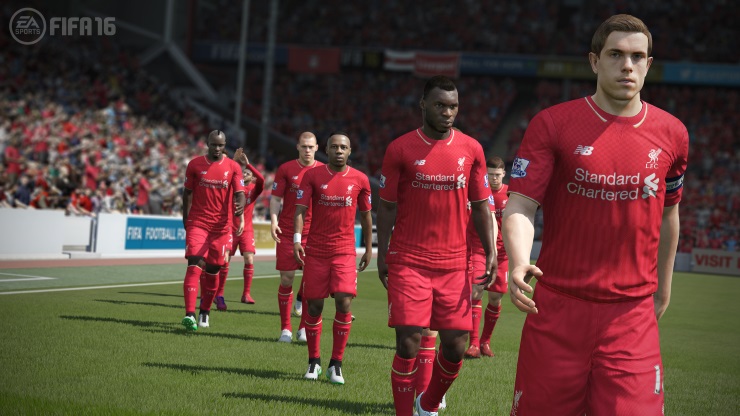 There’s a simple fact about the FIFA series: it hit a peak a few years ago and has been coasting since. That’s not a criticism, it’s just how things are when you’re at the top of the mountain: there’s nowhere else to go… well, except from down. But let’s ignore that, because it ruins my metaphor.

Still, we were told during the usual pre-hands-on presentation at EA’s UK headquarters that there is something new in FIFA 16, a “major new mode” no less. It’s an addition to the hugely popular Ultimate Team bit of the game, and it’s called Draft Mode.

Pitched as “FUT distilled”, Draft Mode works as follows: you pay your entry fee (either 7,500 coins or 300 FIFA Points – though this may change by release) and are given five random formations to choose from. On picking yours (4-1-3-2, obviously), you are presented with an empty team-sheet in your chosen shape, where you then go about choosing players for each position from five random selections presented. For example: I choose my striker position and am presented with five gold players, all ranging from around 82-85, and I have to choose the best suited for the current situation, taking into account specific attributes as well as their chemistry with surrounding players. Then I move on to any other position – picking the goalie I am unlucky enough to get some bronzes, meaning my range is limited in the high 60s, though fortunately there are a lot more slots in the subs and reserves to make up for this shortfall.

After selecting all of your players, you choose a manager (again from a random five), and go on to a tournament against teams of escalating difficulty/ratings, going from one star to four. Comprising of four rounds in single-match knockout format, it’s a brief, yet intense competition that ultimately reaps different rewards depending on your progress through it. Or, in the case of my four-match win on pro difficulty, three silver packs. I was assured this was an error, though, and all rewards would be appropriate to your performance – as well as worth at least as much as your coin/points paid in to enter the mode.

So, two things from my time with it: firstly, I would hazard to call it a major addition to FUT, instead feeling more like a distraction. Secondly, it’s a solid mode for people like me who don’t have the time to build up epic FUT squads, allowing us to put together a four-to-five star team in mere minutes.

Weirdly, this quick distraction of a mode clearly created to squeeze more coins, points and – shock! – money out of those who don’t normally play FUT, was originally aimed at hardcore players of the mode, according to Adam Shaikh, creative director on FIFA Ultimate Team. “It was pretty quick that we realised it would work better for the ‘non-hardcore’ players,” he told me, “It didn’t change the design very much, but it was something we thought YouTubers and people on Twitch would want to show, as you can have a complete experience, as well as people who are newer and don’t have much time, they get to see a good sample of what the full FUT experience is like.”

This desire to bring in players who don’t usually touch FUT has bled over into other areas of the mode too, with elements like the full broadcast package being brought over from the main FIFA 16, as well as numerous little changes to things like searches (search for in-forms!) and group tagging of cards. There’s also a bunch of new Legends coming to the Xbox One version, with the likes of George Best, Ryan Giggs, and Vitor Baia being introduced alongside a new chemistry for the old players. They now get along well with everyone, making them much more like the super-cards they should be. But there’s still no movement towards the less globally known legends, like Matt Le Tisser or Duncan Ferguson, and Shaikh wasn’t much help with either requst. “It’s a tricky one – I’m not involved in the selection of the legends. I know when we started off it was decided they had to be people who were recognised globally.”

I’m not crossing Big Dunc off my wishlist just yet, then.

Beyond the things already mentioned, though, there aren’t any huge changes to FUT – even if EA claims otherwise. You can now be rewarded with loan cards, integrating them with the game more than they were before instead of just relegating them to the catalogue (and barely updating who’s available). There’s still no position switch card, though Shaikh did at least admit it’s something that comes up. “It’s something we discuss fairly regularly – the system that’s in place is good for some things, but maybe doesn’t give some people the flexibility they want, but it’s difficult to really talk about what we may or may not do in the future.”

And while women’s teams might be the marquee new feature for FIFA 16, they aren’t going to be in the Ultimate Team part of the game for the time being. “A lot of that comes down to what will happen with the feature in general,” Shaikh said, “The biggest thing from an Ultimate Team perspective is the breadth of content – with chemistry and things like that you need a lot of variety in players, that sort of thing. Unfortunately I don’t really know what the future holds.”

But FUT is still growing. Every year it gets a bit more time in the presentation; a bit more influence over what we’re previewing. It’s clearly a mode that makes EA a fair bit of cash, and it’s clearly something that a lot of thought is put into with regards to making us part with more of that cash. It all sounds distinctly like a free-to-play game, so when is FUT becoming a standalone game? “That sounds like a question for the execs!” Shaikh chuckled, clearly a bit nervous from my questioning, “Theoretically speaking I don’t see why not. In some ways it’s a bit weird, because Ultimate Team we tend to talk about and think of a separate piece, but the reality is so much of what it is is provided by core FIFA – the gameplay, presentation, audio, everything like that. So while you can get to the thing of yes, theoretically it could be something else, but you need it to be the whole of FIFA. Without all those other bits, Ultimate Team isn’t much of a game. In the end, there are free-to-play games of almost anything, but it’s obviously a big thing.”

Whatever the half-answer might be, my money’s on FUT being standalone within the next five years. The framework is there, the experiments in free-to-play psychology have been underway for years and, frankly, EA would be silly to overlook the chance to make Loads More Money.

Read our FIFA 16 gameplay preview.
Liked it? Take a second to support GodisaGeek.com on Patreon!