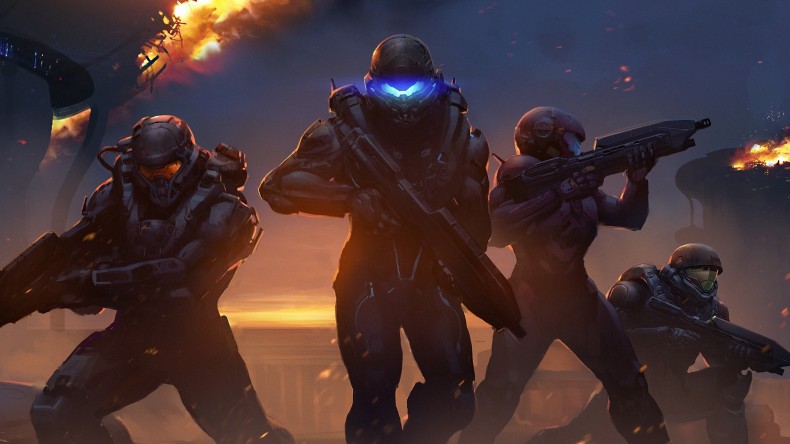 Take Halo 5’s impressive, deliberately overblown opening cinematic that sees Jameson Locke’s Fireteam Osiris galloping down a snowy mountainside making deceptive mincemeat out of a Covenant army with a hefty pinch of salt. It may look glossy and slick and expensive, but it’s also an unashamedly false representation of the gameplay. Halo has always been a frantic forward-facing blaster, but even at your best you won’t mow through the enemy with such embarrassing ease.

What that cinematic does capture, however, is the sense of awe-inspiring scale with which 343 Studios has imbued Halo 5: Guardians. The opening mission, Osiris, begins at the end of that cutscene, and immediately hits you with eye-melting visuals as you blast your way through Covenant and Forerunner forces with considerably less grace and speed than the cutscene promised. But the gunplay, as effective and intoxicating as it is, is not the star of the show yet.

Beyond the icy battlefield, a different conflict rages in the night as the two enemy forces clash in a score of dogfights that pepper the star-salted sky with blooms of fire and bright neon blasts of plasma. The scale immediately dwarfs anything we’ve seen in Halo before. Even Destiny‘s vast yet ultimately vacuous vistas can’t match it for pure spectacle. Halo has always been a series for showboating, never shy to present a pitched battle as the distant backdrop, an atmospheric aid as effective visually as surround sound is aurally.

It’s a theme that continues into mission two, as the legendary Master Chief leads Blue Team to retake a captured UNSC battleship. The ship itself is huge, but the mission is set within the Covenant hanger that houses it. From views of the endless cosmos presented through star-side windows, to the gargantuan hanger itself, that confident, swaggering sense of scale is ever-present. It’s even in the minutiae; banks of diodes, decayed corpses, steam-shrouded maintenance corridors, flashing warning lights. The details are impressive, and show 343 at its best.

The level design itself is Halo through and through, showcasing multiple routes that ultimately lead to the same place, opportunities for flanking and elevation that encourage you to think on the fly, using your boosters, the new controllable ground pound and, most importantly, your squad, to force the enemy to react the way you want them too. At times, those opening few missions evoke the best of Halo: Reach (the series’ highpoint, in this writer’s opinion), relying on teamwork and organised chaos to win the day.

But it’s early days. We’ve yet to delve beyond Mission 3 and get to the nitty-gritty, yet to identify whether this initial spectacle is intended to set the bar or simply dazzle us with all the pretty-pretty. So far, I’ve yet to sample more than a few hours of the campaign, and so there’s still time for Halo 5: Guardians to go either way – but right now, 343 Studios are doing a good job of convincing me that you don’t need open-world gameplay to deliver such colossal scale.

Senior Content Editor Mick has been playing games for over 30 years and writing about them for around 12. After drifting from site to site for a while, settling briefly at the now-defunct Made2Game and freelancing for the gone-but-not-forgotten NintendoGamer Magazine, he came at last to rest at Godisageek. Mick has been a reviewer, staff writer and content editor here for some time, while also moonlighting a little for Red Bull Games. He has 4 kids, has written 2 novels, and sometimes even manages to pay a bill or two. You'll usually find him defending the galaxy in Destiny 2, battling evil in Diablo 3, or lurking in the background on Twitter. Find him there @Jedi_Beats_Tank, or on XBL (JediWaster247), PSN (Jedi_Waster) or Nintendo (JediWaster).
MORE LIKE THIS
343 industriesHalo 5 GuardiansMicrosoft